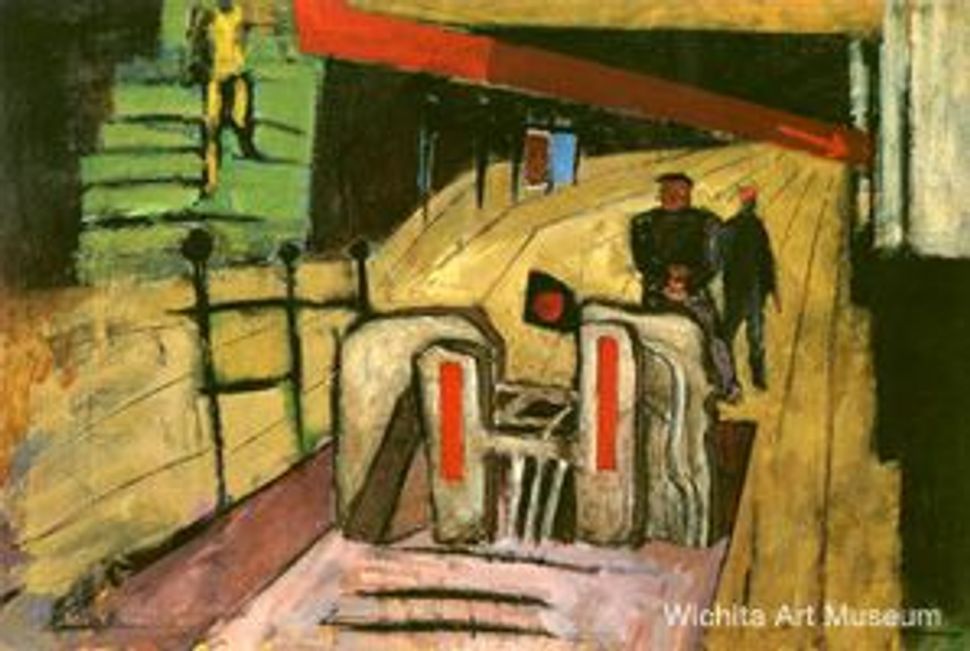 Joseph Solman, one of New York’s best and now nearly legendary painters, turns 98 this year. I don’t know if he still paints. The last thing I read about him was a 1999 New York Times article by Michael Kimmelman, which reported that the then-90-year-old artist was still working away in a “cluttered studio above the Second Avenue Deli in the East Village of Manhattan.” Indeed, as I have been glad to ascertain, the artist’s name does appear in small print on the tenant register of the building’s facade. It’s a humble reference for a fabulously gifted yet woefully underappreciated American master. 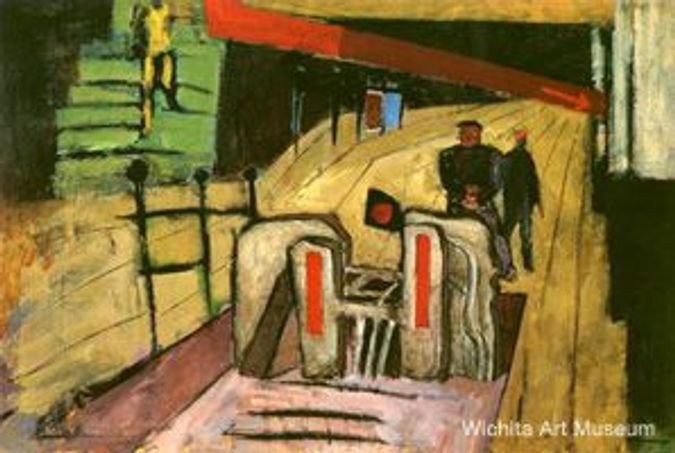 A veteran of the city’s art scene, Solman is known today as the last surviving member of the group called The Ten. He co-founded it in 1935 — along with other, mostly expressionist, and mostly Jewish, avant-garde artists such as Mark Rothko (still Marcus Rothkowitz at the time), Ben-Zion (previously Benzion Weinman) and Adolph Gottlieb. Some of them would eventually climb to stardom, but in those early days they were underdogs, dissenters from the mainstream academism and from “regionalists,” like Thomas Hart Benton and Grant Wood. In five year’s time, “The Ten” would part ways: Rothko and Gottlieb abandoned figuration for a new style, Abstract Expressionism. Solman, however, was more complex. Trying to fuse cubist-surrealist-abstract elements with representationism, he arrived at a profoundly innovative vision — but one that, precisely due to its complex originality, was eclipsed by Rothko’s subtle but more radical and thus easier-to-assimilate abstraction.

Through decades following the dissolution of The Ten, Solman has been focused on his immediate subject: the city. In haunting gouaches and oils, he’s captured New York, recognizably gritty, with graffiti and skeletal fire escapes, shop signs and rickety lampposts. In the here-and-now facade, however, there is also an older, European city: the space of memory, of archetypes and dreams (significantly, it is from Vitebsk, Russia, the hometown of Mark Chagall, that Solman came to New York at the age of 3). But just as Solman’s cityscape has the enigma of De Chirico without DeChirico’s obsessive metaphysics, or the elemental loneliness of Hopper minus the latter’s occasional stuffiness, so he has Chagall’s aura of half-forgotten childhood freed of its sentimental mystique. We won’t find lovers floating through the skies in Solman’s luminously executed but austere streetscapes. An instinctive colorist, Solman is a painter’s painter and, for that matter, a painter’s poet, too — deriving from cadences of color more eloquence than any narrative device could provide.

I could never forget one of his canvases at New York’s Jewish Museum, “Venus of 23rd Street.” In its near-cubist vertical design the buildings tighten toward some knot at the low horizon. The street is peopleless, and there is no depth: surfaces are flat. But there is looming mystery in the intense blue of the sky, and in the rich, saturated browns and purples that are like colors of the subdued Fauves. The only Venus around is the hulking figure on one of the shop signs. But in Solman’s painting-within-a-painting, it threatens to dissolve into a more spectral presence: like mannequins one reads about in Bruno Schulz, or Golems teeming beneath Isaac Bashevis Singer’s pages, it becomes an emblem for ever-proliferating apocryphal creation. But again, this phantasmagoria is decidedly not gimmicky: Reality still bites; the shop sign is a shop sign is a shop sign. The mystical does not erase the material but is subsumed and, in turn, invoked by it.

Speaking of figures, both alive and mythic, I should mention some of Solman’s portraiture currently shown at the Danforth Museum of Art, in Framingham, Mass., near Boston. The small but vibrant exhibition presents his paintings of New York subway riders done as the artist commuted to work as a part-time bookie at the Belmont Park racetrack in the 1960s. An avid horse-rider himself, Solman used racing forms as his paper, sketching in pencil travelers caught between reverie and daily grind. He colored these drawings with gouache — but only at home, and sometimes years later. The show’s title, “Notes From The Underground,” is illuminating on several levels. Apart from the subway (which Solman has called the “greatest studio of all time”), it also alludes to the famous novella by Dostoyevsky, an epitome of alienated consciousness in a modern metropolis.

To be sure, Solman, who grew up in Queens, where his father was a tailor, is not only un-foreign but also, in fact, a quintessential New Yorker. Nor is his vision of subway riders particularly “alienated”: Drawn in sharp, fluid lines, his portraits do not satirize his fellow travelers as much as they empathize with them. But then, to sketch on the subway is always to be an outsider. (As someone who has sketched daily, both in the New York subway and in Russia’s Metro, I can attest to the chanciness of the enterprise). The sketch artist is always an outsider looking in: a voyeur, a magpie, snatching privileged moments from an unsuspecting crowd. He is an undercover agent, looking for beauty in the most unlikely places. He is, in a sense, in his own psychic, interior “underground” within the public underground of the subway.

This “double underground” could serve as a metaphor for Solman’s entire career. Between his East Village studio and Boston’s Mercury Gallery (where his work is represented along with that of The Ten), he has cultivated a sort of oblique presence, continuing to tightrope between figuration and abstraction while bucking both tradition and trend, the Scylla of nostalgia and the Carbides of fashion. It is as if in some odd way, this state of permanent transit has enabled him to remain constant to his aesthetic. “I have long discovered for myself,” he wrote, “that what we call the subject yields more pattern, more poetry, more drama, greater abstract design and tension than any shapes we may invent.”

One can see precisely what he means by looking at his subway riders. He gets the detail with wry precision of an ironic humanist: Titles like “Lady in Blue Polka-Dot Dress,” “Yuppie” and “Man in Olive Raincoat” give a sense of his panoply of human types. At the same time, his arrangement of flat areas of dress against the negative space of car seats and walls is essentially decorative, an abstract design more consistent with the two-dimensional realm of modernist painting and with oriental silk paintings rather than with the traditional Western three-dimensional space. One would be right to recall Lautrec and Daumier. But along with these self-acknowledged master influences, Solman’s razor-edge of balance between human urgency and abstract beauty recalls yet another patron saint, one who also pursued his art at the expense of fashion: Van Gogh.