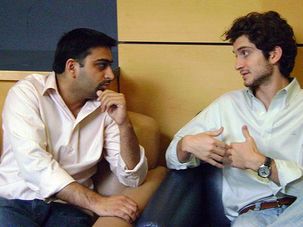 When a new venture at Columbia University brought together 30 Muslim and Jewish entrepreneurs from the United States, the United Kingdom and France for a cross-cultural dialogue, the focus was on something other than interfaith work. They talked business.

The Legion of Honor, an award conceived of back in 1802 by Napoleon Bonaparte, was bestowed on writer and historian Annie Cohen-Solal today at France’s consulate in New York.

Those living on the other side of the pond were struck with confusion this week when UNISON — Britain and Europe’s largest public sector union, with more than 1.3 million members — prohibited Trade Union Friends of Israel (TUFI) from attending its annual conference in Brighton, which wrapped up Wednesday. TUFI has attended this conference for the past four years without issue.

Conservative Judaism, struggling with decades of declining membership and an abrupt, sweeping change in its senior leadership, heard a call in early June from three prominent rabbis for a rethinking of its mission.

Rabbis Without Borders, an initiative to make Jewish wisdom accessible to a wider audience by creating a network of interdenominational religious leaders, meets for the first time this month.