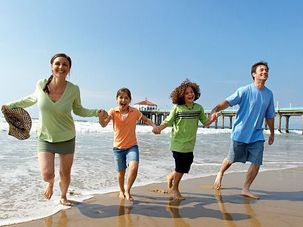 There are more American Jews than ever before, intermarriage rates are steady, and we have never been prouder. So Bethamie Horowitz asks: why the doom and gloom about the Pew survey?

In the past several months three different organizations have held gatherings highlighting the growing racial-ethnic diversity of the American Jewish population. They have been advocating a “big tent” approach, pushing the organized community to adapt to perceived demographic changes.

A study recently released by The Steinhardt Social Research Institute at Brandeis University shows that the Jewish population in America is actually about 20% larger than previously estimated. Whereas the National Jewish Population Survey 2000-01 put the figure for the “core Jewish population” at 5.2 million, the new numbers range from 6 million to 6.4 million. Moreover, it appears that not only did the NJPS lowball the population, but it also significantly undercounted both non-Orthodox families and the younger non-Orthodox adult population, thereby considerably distorting our collective self-understanding.

Are We More Than Just A Category?

In 1964, preeminent sociologist Marshall Sklare published an article in Commentary magazine titled “Intermarriage and the Jewish Future,” sounding an alarm at a time when only 7.2% of married Jews had non-Jewish spouses. Even though Sklare and most Jews of his time viewed intermarriage as a one-way ticket out of Judaism, the conventional wisdom of the time held “that the threat of the problem has been surprisingly well contained in America.” But Sklare saw this complacency as deeply misleading.

Seeking Visions in a Contradictory Time

Since the beginning of the second intifada, American Jews have bumped along like an old tin can tied to the back of Israel’s jeep as it veers along the dusty road to who knows where. It’s been hard — but mind you, never as difficult as what Israelis go through — to adjust to the painful, seemingly unending saga of intifada and occupation over the years, to the point where we’re equally in despair of and exhausted by it. And this summer, apparently out of the blue, we entered a new reality.

A Gap of Our Own Generation

At a talent show earlier this spring, a group of sixth graders from Manhattan’s Abraham Joshua Heschel Middle School played “Hey, Jude.” Soon enough, everyone in the room — kids, parents and teachers — was crooning the Beatles hit song together. This never would have happened in my school days during the 1960s.Back then, college kids

Jews are, as the epithet goes, a wandering people, and today we are among the most mobile Americans. Modern technology may have made it much easier to stay in touch across great distances, but our far-flung experience still poses challenges — challenges that have, quite literally, grave consequences.Take, for example, Michael, a 50-something

Of late, ethnic Jewishness in America seems to have taken on some new flavors. Consider the bagel.Today, in addition to the traditional poppy seed and onion, one hears about heretical varieties like blueberry, rainbow and parmesan. And what’s more, these bagels now seem to be available everywhere around the nation, whereas even

For a generation of American Jewish baby boomers who grew up looking east toward Zion from the West’s leafy suburbs, Israel has always come off as the poorer relation enduring scrappier circumstances. America had what Israel lacked: a Constitution, and good plumbing.American bathrooms were tidy and porcelain, with soft rolls of

Everyone knows that there is a daunting number of Jewish organizations in America. A recent volume of the American Jewish Year Book lists more than 500 operating at the national level, not to speak of those operating locally. The veritable babble of acronyms underscores the community’s hyper-organized character: UJA, AJC, JDC, ADL, AIPAC, IPF,