As Olympics Near Their Close, Life in Beijing Goes On

Looking up at the sky tonight, I could see stars glittering. When I mentioned this to my neighbor, she remarked that the government must be thrilled, because stars are visible above Beijing about as often as the Olympics come to town. I told her that the local Chabad rabbi would probably appreciate the great weather, too. But as she had never heard of the “three stars rule” or Shabbat, I imagine it was lost in translation.

It’s been two weeks since the Olympics began, and Westerners here are getting rather fed up with noodles, dumplings and rice. Even the bread here can taste strange. For Jews, or anyone who has tasted a freshly baked New York bagel, the rumors of a bagel shop in Beijing circulated around hotel lobbies, tour buses and the Olympic Green have become somewhat of a fixation here. A few days ago, an article appeared on the New York Times website that sent those who could access the site here running to hail a cab, yelling “beigu,” 贝谷, the Chinese word for the holed-bread, which means “precious wheat.”

Mark Spitz has been questioned repeatedly over how he feels now that Michael Phelps has more medals than he does. Holding up the latest cover of Sports Illustrated, featuring a grinning Phelps wearing his eight gold medals around his neck — a re-creation of Spitz’s famous seven-gold-medal pose from 1972 — the elder champion smiled and commended the 2008 phenomenon. But he couldn’t resist giving a “competitive” answer when asked who he thought was the faster swimmer, saying:

What must it have been like for Rami Zur today, the American-turned-Israeli-turned-US team kayaker, when he found himself eliminated from the Olympics after placing seventh in the men’s kayak single 1,000 meters race? Surely there was some despair and anger. But could there also have been a smile? A chuckle perhaps? 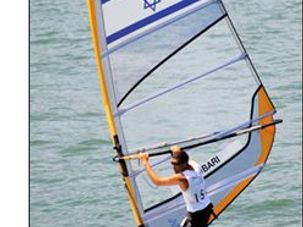 Israeli windsurfer Shahar Zubari sailed to a bronze medal today after coming in second place in his last race of the 2008 Olympic games in Qingdao. It was Israel’s first medal of the Beijing games and its seventh of all time. Such a rare victory earned Zubari a congratulatory phone call from Olmert, according to Haaretz:

Three decades after the 1972 Munich Olympics massacre, this year’s Israeli athletic delegation joined Israeli diplomats and other Jews in commemorating that terrible loss this morning here in Beijing in an event sponsored by the Israeli embassy and the Israel Olympic Committee.

On my flight from Newark to Beijing a few weeks ago, I noticed a young Hasidic man davening in tefillin. The plane was almost completely packed with Chinese, who must have had no clue what he was doing bowing while wrapped in leather. As one of the few other Jews on the flight, I approached him at baggage claim to ask him the halacha on davening when flying through different time zones, especially when it was daylight the entire trip (which happens when flying over the North Pole). He told me that, in fact, one doesn’t have to wrap tefillin, but he wanted to anyway, just to be sure he fulfilled the mitzvah.

Rabbi Heads to Beijing for Some Face Time With China's Leaders

Israel's Olympic Duds Go From Beijing to the Racks

Oh, to be a gold-medal Olympian. Michael Phelps’s record-breaking victories this Olympics could be worth between $50 and $100 million in endorsements, and it’s quite possible that Speedo and Nike may soon enter a bidding war over the rights to clothe the lightning-fast swimmer’s body.

On these hot August days and nights, Beijingers often take to the parks, squares and sidewalks to socialize, dance and compete in their own “Olympic Village.” For many, the only sport worth sweating for is table tennis, known here as ”pingpang.” Amid the buzzing cicadas and jingle of bike bells, the smack of paddles hitting plastic hangs in the air, interspersed with cheers and groans.