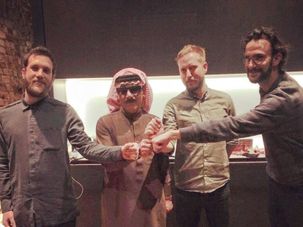 It’s 10:30 p.m. on a Friday night in Tel Aviv and young Israelis, wearing horn-rimmed glasses, vintage floral print dresses, and man buns are sipping drinks in a dimly lit bar. A Lebanese track from the 1979 “Belly Dance Disco” album by Ihasan al-Munzer plays in the background. The music with its thick unmistakably Lebanese synthesizer snakes it way through the bar around half-empty glasses of almond-infused Arak and into the ears of Israelis who sway their hips and nod their heads to the intoxicating blend of Middle Eastern synth-keyboard and 1970s funk disco. This bar is not an exception. Throughout Tel Aviv, old-school Israeli and Arabic music is filling the city’s cafes and bars. Fortuna Records is spearheading this trend, a reissue label and group of four Tel Aviv DJs who are re-animating some of the most captivating Middle Eastern music previously relegated to the back bins of vinyl shops.