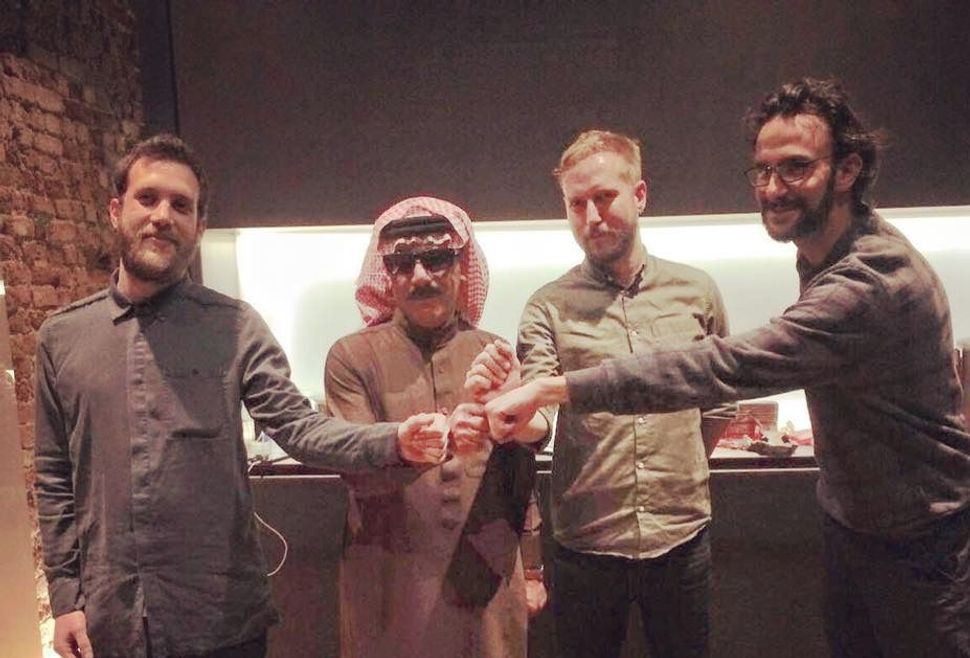 It’s 10:30 p.m. on a Friday night in Tel Aviv and young Israelis, wearing horn-rimmed glasses, vintage floral print dresses, and man buns are sipping drinks in a dimly lit bar. A Lebanese track from the 1979 “Belly Dance Disco” album by Ihasan al-Munzer plays in the background. The music with its thick unmistakably Lebanese synthesizer snakes it way through the bar around half-empty glasses of almond-infused Arak and into the ears of Israelis who sway their hips and nod their heads to the intoxicating blend of Middle Eastern synth-keyboard and 1970s funk disco. This bar is not an exception. Throughout Tel Aviv, old-school Israeli and Arabic music is filling the city’s cafes and bars. Fortuna Records is spearheading this trend, a reissue label and group of four Tel Aviv DJs who are re-animating some of the most captivating Middle Eastern music previously relegated to the back bins of vinyl shops.

Moar Anava, whose DJ name is “Hectik,” talks to me while dragging on a cigarette at Tel Aviv’s Port Said restaurant, named after the famous Egyptian city. A massive poster of the Syrian-Egyptian singer Farid al-Atrash hangs on the restaurant’s wall.

Realizing that retro Brazilian and African music was gaining popularity, the four DJs similarly saw a bright future for Middle Eastern music. “We thought we have music that is ten times better here … and we had this wild thought of creating a label that reissues only Middle Eastern stuff,” states Maor Anava. “We grew up on this sound, and now it became kind of hip to go back to the roots.”

The catalyst that created Fortuna was a Yemenite folk-jazz fusion album, by Israeli singer Tsvia Abarbanel that was reissued in 2012. Souls of the East recorded in 1970 features Abarbanel, born in Rada’a Yemen, singing in a traditional Yemeni style, her powerful voice fluttering over jazz instrumentation. After hearing the album Anava knew that this would be Fortuna’s initial release. However, Abarbanel who was never well known and had fallen into obscurity was hard to track down. Anava called every Abarbanel in the phonebook asking if they were a singer. He found her, now 75 years old, living in Beit She’an, a sleepy town in northern Israel known for its Roman ruins. With Abarbanel on board, Fortuna Records was born.

Abarbanel left her traditional Yemenite-Israeli family, who were sheepherders in northern Israel, to study Musicology in Los Angeles. It was there that she became enthralled with the thriving hippie and disco scenes of the 1970s. After returning to Israel, Abarbanel sought to blend her Yemeni heritage with Western music and contacted Israeli jazz pioneer Albert Piamenta to produce the album.

When recorded, Souls of the East was deemed too strange for commercial production by Israeli record labels and Abarbanel released the album herself. But Fortuna’s reissue has given the album a new life. Abarbanel’s spectacular tribute to Yemeni folk can be heard streaming out of Tel Aviv bars and cafes today and earned the praise of influential BBC Radio DJ Gilles Peterson, who spotlighted the album on his radio show.

While Fortuna seeks to reissue albums from across the Middle East their Israeli, identity has been an obstacle to working with Middle Eastern record labels. According to Anava, Fortuna “is not into war … just listening to music.” Nevertheless, Anava has had a few terse conversations with contacts in the Middle East, such as a Lebanese man who politely stated “I do not work with Israel.”

Thus, prior to releasing any music from Arab countries Fortuna specialized in the music of Israeli immigrants from Mizrahi and Sephardic backgrounds during the 1960s and 1970s. These immigrants created a unique “Jaffa sound” which arose from the concentration of clubs and recording studios in Jaffa at the time.

Emblematic of the Jaffa sound is Fortuna’s 2013 reissue of Turkish folk songs and disco-rock recorded in 1978 Jaffa, by then sixteen-year-old Grazia Peretz. Peretz was a child star in the Jaffa music scene. Pressured by her father to record an album of Turkish folk songs, Grazia insisted that her album incorporate the disco sounds she was enjoying at the time, including a synthesizer. But the producer used an Ashkenazi-style rock n roll synthesizer, thus creating a spectacular fusion of Turkish folk-disco-rock, originally meant for the wedding halls of Ashdod, but now played internationally.

Unlike Abarbanel, Peretz is well known among many Israelis, so she was easier to track down. Nevertheless, according to Anava, she was hesitant to reissue the album as it brought up traumatic memories of performing late into the night as a sixteen-year-old in smoke-filled Jaffa clubs. At the age of eighteen Peretz left her father and left music, but due to Anava’s persistence she agreed to allow Fortuna to release the album. The 1000 vinyl copies that Fortuna printed quickly sold out.

According to Anava, older Israelis like Grazia could not understand why young people were interested in these lost sounds of the Middle East. But Anava’s logic is simple, “We like it because it’s funky.”

After a string of successful releases from Israeli artists, the DJs at Fortuna set their sights across the border to the Lebanese “Belly Dance Disco” album, reissued in 2015. They found an email on a dodgy website and luckily received a response from a Lebanese businessman, who initially did not know that Fortuna is Israeli. Nevertheless, their +972 area code subsequently gave them away. But sure enough, the businessman was willing to work with the Tel Avivians. Anava quickly jumped on the opportunity and bought ten more albums, which will be compiled into a forthcoming release of 1970s Lebanese tunes.

On March 12th the DJs of Fortuna preformed alongside Syrian singer Omar Souleyman in Istanbul, which appears to be the first Israeli-Syrian music collaboration in recent history. Souleyman who is one of Syria’s most prolific wedding singers fled the Syrian war and emerged as a cult phenomenon in indie music circles. Anava was nervous to perform in Istanbul “we told the organizers that are we are Israeli, and that they need to keep their eyes open,” he tells me. Yet despite security concerns the sold-out 2000 person concert went off without a hitch.

According to Anava, Souleyman even agreed to play a show in Israel on two conditions – his performance would be unannounced and would take place at Jerusalem’s notoriously tense Damascus Gate. Souleyman pictured himself arriving on a truck with speakers, performing for thirty minutes, and then vanishing from the scene. Anava still hopes to bring Souleyman to Israel, but so far the Israeli government has not approved a visa for the Syrian national.

Fortuna has also formed quiet connections with DJs in Ramallah. “None of our music is released in pure Ashkenazi Hebrew,” states Maor. “So my friends in Ramallah can play it.” DJ Zack Bar even has a collection of PLO and Fatah records from the First Intifada. “We don’t understand the words,” states Anava. “But we assume if we did it would be harsh.”

But Anava’s real dream is to release a compilation of Palestinian Dabke music in hopes of preserving the music for future generations. “Twenty-five years from now, God knows where we will be,” states Anava. “The [Palestinian] music is really worth cherishing … the music needs to be taken out of Palestine for the world to hear.”

Anava takes the last drag of his second cigarette and tells me “we’ve been very lucky.” And it’s easy to see why; there is a newfound appreciation for Middle Eastern music, especially among Tel Aviv’s in-crowd. Bars and restaurants in Tel Aviv like Port Said, Tangier, and Anna Loulou (co-owned by a team of Israelis and Palestinians) pay homage to Arabic music and decor. Last summer, A-WA a group of three sisters who sing in Yemeni-accented Arabic made history with the first exclusively Arabic song to top Israeli music charts.

At Port Said the music switches to a synthesizer-heavy track, which immediately takes hold of the patrons, their heads bob up and down to the beat and sweat beads roll down their necks. A waitress approaches Anava “I bought my tickets for your Istanbul show! I can’t wait to see Souleyman he’s my favorite,” she says with a smile.