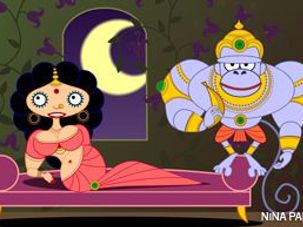 Nina Paley was not looking for an international controversy. Nevertheless, in April, when the now 40-year-old Jewish cartoonist screened her latest film, “Sita Sings the Blues,” at this year’s Tribeca Film Festival, she said that’s precisely what she got.

His directorial prowess led to the endearing marriage of slapstick comedy and supernatural lunacy known as “Ghostbusters,” but once upon a time, Ivan Reitman was merely a scared little Jewish boy. He was born in Czechoslovakia in 1946, shortly after his parents, Leslie and Clara, barely managed to survive the Holocaust. Their life together in Central Europe fell apart when Clara was sent to Auschwitz and Leslie became a fugitive. Following the war, the Stalinization of Czechoslovakia left virtually no tolerance for the religiously observant Reitmans, and the family made a desperate escape to the decidedly more hospitable environment of Toronto. Arriving there in 1950, Leslie and Clara found decent work at a local Laundromat. Two decades later, Leslie opened a carwash. “We came here penniless. I didn’t speak the language,” Ivan Reitman recalled shortly before being inducted into the Canadian Walk of Fame earlier this year. “There’s something about being from a smaller place that makes you more polite.”

Why ‘Sammy’ Won’t Run — At Least Not on Film

Although Hollywood has changed plenty since Budd Schulberg’s fictionalized exposé “What Makes Sammy Run?” first hit stands in 1941, the novel’s pioneering take on the lure of money and power remains timeless. The story’s inimitable antihero, Sammy Glick, reacts against his lower-class Jewish upbringing to become an amoral hustler who cons his way into running a major studio. Initially, the industry denounced the book as a gross caricature of success, while some claimed it was antisemitic, but this hardly affected its popularity. As years passed, the myth of the movie business solidified and Sammy Glick became inextricably bound to it.