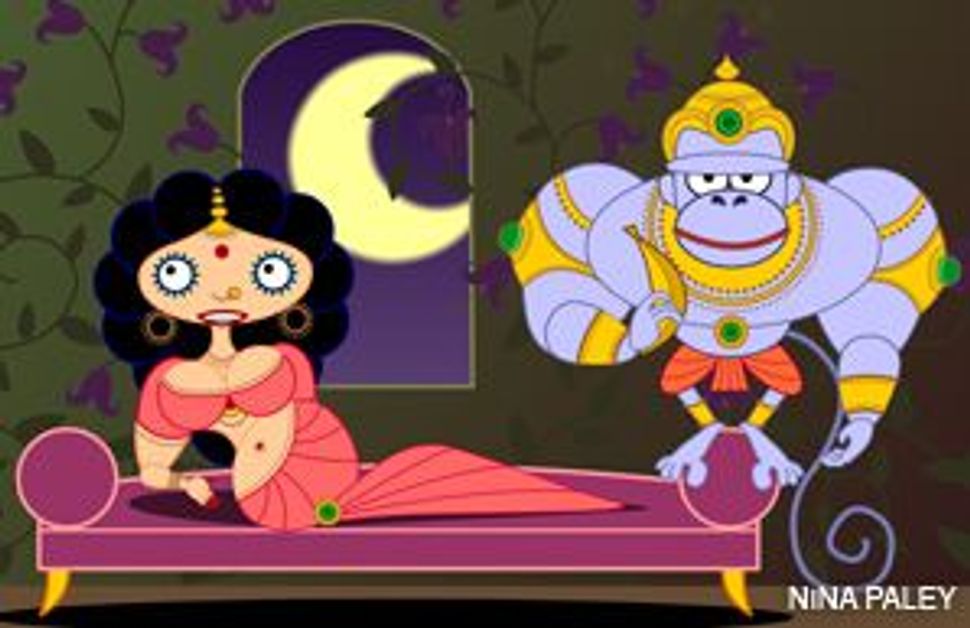 GOING APE: Nina Paley told her own story as a riff on ?The Ramayana? and unpeeled controversy in the process.

Nina Paley was not looking for an international controversy. Nevertheless, in April, when the now 40-year-old Jewish cartoonist screened her latest film, “Sita Sings the Blues,” at this year’s Tribeca Film Festival, she said that’s precisely what she got. 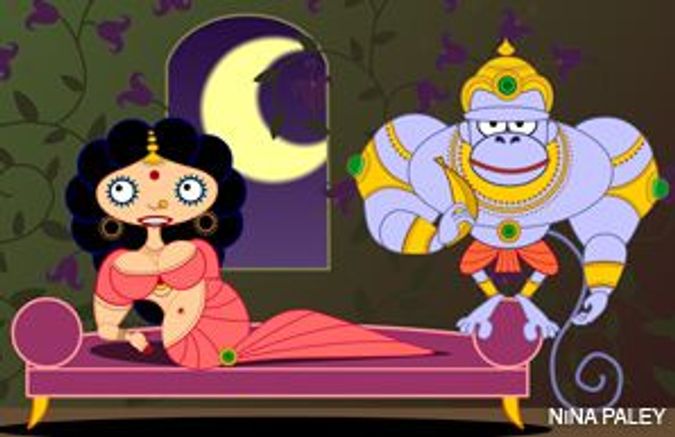 GOING APE: Nina Paley told her own story as a riff on ?The Ramayana? and unpeeled controversy in the process.

A highly experimental animated work that Paley created on her laptop, “Sita” draws parallels between the ancient Indian text “The Ramayana” and Paley’s divorce. However, her use of the sacred story to tell her own sparked responses from around the globe. On her blog, commenters identifying themselves with such threatening names as “Nina Raper” left loathsome comments. “Have fun representing white people with your cultural appropriation and misrepresentation” went one rant, while religious conglomerate Hindu Janajagruti Samiti fumed that “Paley is trying to bring Sita down to the level of mortal love experienced by her, a product of materialistic-individualistic ideology.”

Playfully weaving 1920s jazz tunes sung by Annette Hanshaw into many of the key scenes of “The Ramayana,” “Sita” explores the universality of the story’s traditional themes. Several versions of the epic tale have circulated for thousands of years, but all of them involve two principal characters: A heroic prince named Rama and his beleaguered wife, Sita. In one of the major plot points, Sita gets kidnapped by a ruthlessly oppressive king. Although Rama rescues her, he later decides to banish Sita from his kingdom, as her time spent with another man puts her purity into question. Paley alternates between these twists and her gradual falling-out with her husband, who left her for a job in India and broke up with her via e-mail.

Paley first encountered “The Ramayana” while staying with her husband in India before the divorce. “I didn’t love it the first time. I was a bit shocked by [Sita], who I thought, at the time, was very submissive,” she recalled in an interview with the Forward. “Then, when I went back to New York and my husband dumped me, she became my hero.”

Paley, author of the syndicated comic strips “Fluff” and “Nina’s Adventures,” started working on the film in 2002. The more she developed it, the more ambitious her plans became. Eventually she invited journalist Aseem Chhabra and two other South Asian acquaintances to a recording studio for an informal discussion about the major thematic interpretations of “The Ramayana.” In the finished film, the audio from the conversation serves as the dialogue for three Indonesian shadow puppets — the film’s delightfully unreliable narrators. Their debate is at times intense, humorous and deeply insightful, striking a tone not unfamiliar to scholars of many ancient texts.

Yet even as her Indian colleagues embraced the project, Paley faced larger opposition from Hindu fundamentalists who were convinced she has defiled a sacred tradition. Although taken aback by some of the hostility, Paley stands by her intentions. “I thought it might be a bit controversial, but I wasn’t fully aware of how art and artists are major targets of some right-wing nationalist groups in India,” she said. “I always imagine an audience of smart, compassionate people I’d enjoy spending time with.”

The South Asians in her film support her. “In the last two decades, the right-wing religious forces in India — Hindu and Muslim — have become very strong, vocal and sometimes violent,” Chhabra explained. “But I also know that there are enough sane, balanced, liberal people in India who take art for what it is.” Filmmaker Manish Acharya, another shadow puppet voice in the film, added: “If people are offended, I don’t think anyone has the right to tell them that they are wrong. But just as they have the right to push their interpretation of ‘The Ramayana,’ this filmmaker has the right to push hers.”

To buoy her philosophy of a cross-cultural approach to art, Paley pointed to Acharya’s 2007 film, “Loins of Punjab Presents,” which contains a Jewish character comfortable in the Indian community. Acharya agreed with the comparison, and went a step further. “I think Jewish culture and Indian culture are very alike,” he said. “Both are family focused, have very strong female influences and use food to show love. Having a Jewish person understand and love India was very believable to me.”

As “Sita” travels the film festival circuit (upcoming destinations include Taiwan and Australia), Paley continues to field offers from American distributors, but the movie’s long-term theatrical future remains unclear. Her close confidants express certainty that Paley can handle public scrutiny. “The first responsibility a filmmaker has is to himself or herself,” Acharya said. “If that requires placing it in another culture, or borrowing from it, so be it. The truth of the storytelling is paramount, and Nina is an honest storyteller.”

Eric Kohn is a daily contributor to Stream Magazine (wonderlandstream.com/stream), and his writings on film appear regularly in New York Press, The Hollywood Reporter, indieWIRE and other outlets.