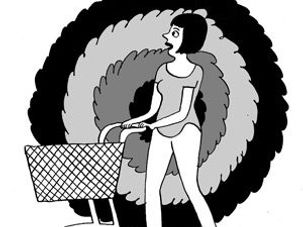 Land of the Surreal

In 1911, when the 11th edition of the Encyclopedia Britannica was published, the entry titled “The Hebrew Language” stated: “The dream of some Zionists that Hebrew — a would-be Hebrew, that is to say — will again become a living, popular language in Palestine, has still less prospect of realization than their vision of a restored Jewish empire in the holy land.” But reality doesn’t always obey the rules of realism, and 100 years later, Hebrew — the spoken language of about six million Israeli Jews — is developing at a dizzying pace.

Excerpt from ‘Confessions of Noa Weber’: I didn’t look at him or at anyone else when I said: “Yes, I want to.” And the next thing he said was: “Okay, then let’s go and do it now, just tell me where to go.”