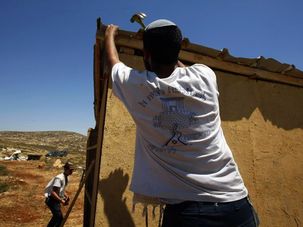 The show goes on. As I write, a radio newscaster is repeating an item about the evacuation of an illegal settlement outpost in the West Bank: At Nahalat Yosef, near Nablus, the army demolished two makeshift mobile homes and removed a third, thereby erasing the outpost. Settler leaders promised to rebuild it. Judging from past experience, the promise will be kept.

The Value of Settlement Is Obsolete

It was one of the most important and largely forgotten milestones in the history of the state: 41 years ago, on July 16, 1967, a young kibbutznik got out of his jeep at Aalleiqa, an abandoned Syrian army base on the Golan Heights, and became the first settler in the occupied territories.

Eliyahu Winograd has read out many judgments in his life. In Israeli history, however, the judgment for which the wizened former judge will be remembered is the one he read in a dry, steady voice on the last day of April 2007: the brief, harsh summary of his committee’s initial report on what went wrong last summer when Israel went to war in Lebanon.

Jared Diamond, author of the best-selling book “Collapse: How Societies Choose To Fail or Succeed,” could gain some sad satisfaction by reading Israeli news in recent days, especially if he reads between the lines. One of his central warnings keeps getting confirmed — for instance, by the report that the Israeli military plans to clamp down on psychological discharges, or by Prime Minster Ehud Olmert’s latest postponement of dismantling illegal settlement outposts. If Diamond feels any sympathy for Israel, the evidence for his thesis won’t cheer him up.

The Sound of Silence: Olmert’s Strategy

Ehud Olmert won’t talk. Reduced to its essence, that was State Comptroller Micha Lindenstrauss’s angry complaint to a Knesset panel Tuesday. The ex-judge was speaking at a hearing devoted to his investigation of how the government handled, or mishandled, the home front during last summer’s war in Lebanon. One reason that the confrontation between Olmert and the comptroller could seize Israel’s attention so completely early this week is that not talking has become the prime minister’s key tactic in foreign affairs as well. With diplomacy at a standstill, there is little to divert the public from the latest inquiry into corruption or the war.

Viewed logically, the scene didn’t look a whole lot like an attempt to undermine Al-Aqsa Mosque and build the Third Temple: At the bottom of a small trapezoidal pit, a single Palestinian laborer wearing a blue hard hat carefully scraped dark soil into a bucket and handed it up to another man standing on a ledge above him, who said “Take!” in Arabic and handed it on to another worker at ground level. At this pace, they were not going to undermine anything in the coming generation.

In Twist, Peres Must Break Own ‘Law’ To Win Presidency

Poor Shimon Peres. If only Israel’s presidents were chosen by foreign diplomats or Diaspora Jews, he’d stand a strong chance of winning. To Peres’s misfortune, the Knesset elects the president by secret ballot. It is a law of nature in Israel that Shimon Peres loses elections. A corollary to that law says Peres runs the next time anyway. Death and taxes are less certain.

At a corner bakery in Jerusalem, the television perched over the counter switched from covering the latest corruption arrests of top government officials to the funeral of legendary Jerusalem mayor Teddy Kollek. “The most honest man in the world is dead, and these guys are living it up,” the normally jovial baker commented glumly.

With Pow-wow, Olmert Tries To Bolster Abbas and Himself

When Ehud Olmert stepped outside the Prime Minister’s Residence in Jerusalem and kissed Mahmoud Abbas on both cheeks Saturday evening, he was offering the Palestinian leader a political embrace. Regard it as the embrace of two men flailing in stormy waters — but which man was drowning, which was rescuing him and did the rescue stand a chance of success?

Torn Between the Land and the State

Here’s a measure of the political mood in America’s Modern Orthodox community: At a convention last week in Jerusalem of the Union of Orthodox Jewish Congregations of America — the main voice of Modern Orthodoxy — guest of honor Ehud Olmert won less applause than the war in Iraq did.