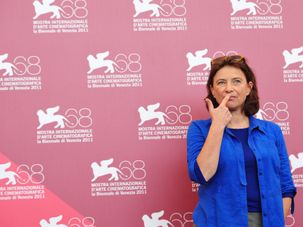 For thirty years, filmmaker Henry Bean and his wife were friends with the filmmaker Chantal Akerman. In light of her apparent suicide, Bean recalls Akerman’s genius and her legacy.

Jacob sits on his deathbed; his feet, one thinks, must be on the floor. He is speaking to his favorite son, Joseph, who sits nearby, perhaps at the foot of the bed. Despite the press of time, Joseph betrays no impatience. He could, it seems, sit quietly all afternoon.

Urim and Thummim. The ineffable name of God was inscribed on some unknown material and placed in the fold of the breastplate. — Soncino Chumash—So what we’re making is the breastplate, the ephod….—What’s an ephod?—Like the linen apron you hang the breastplate over…?—Oh, right.—… the robe,

He is a boy of 8 or 9, sweeping out the entry to the master’s house. He hears his master, Abraham, within, speaking to someone he cannot see, worried that, as the only male born into the household, “this Eliezer of Damascus” might become heir to the household. It took him some moments to divine that this Eliezer was, in fact, himself.He is

After the waters have rolled over them, the men and the horses, one face floats up, a helmet stamped with the royal seal still tangled in his floating hair. The eyes open, and he speaks.“I have a question.”No reply.“Why did you — ” He stops himself, begins again: “Back when the brothers first came to me with their

He was strong and handsome, and he was the first born; but his mother, indifferent to all that, preferred his brother and viewed him, largely, as a dullard. When she talked with his brother, their conversations were so darting and subtle that his head hurt. He could not follow them and came to think that they were using a kind of code to

The Christmas of The Orange Alert

On Christmas morning, I walked down to Eighth Avenue to buy the paper. The sky was gray, at once gloomy and beautiful. Although already past 10 a.m., the streets were nearly deserted and the few people in sight moved quickly and quietly about their business as if trying to attract as little attention as possible.It reminded me of a similar