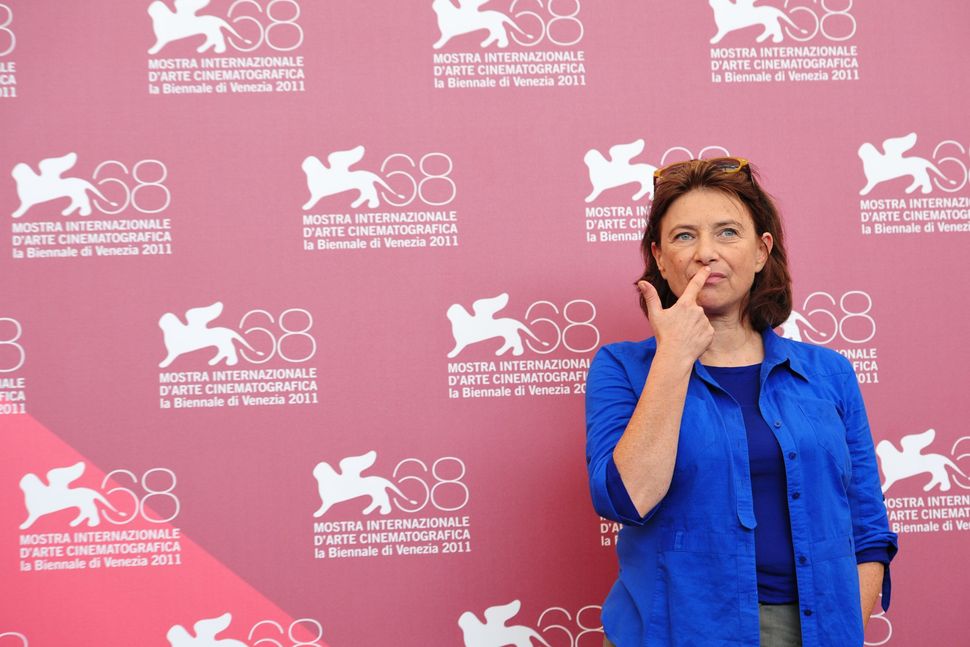 Sometime over last weekend, Chantal Akerman, the Belgian-French-Jewish filmmaker, committed suicide. Her body was found Monday. Her latest film, “No Home Movie,” a verité account of her mother’s decline and death, received its local premiere at the New York Film Festival this week in the immediate aftermath of Chantal’s own death.

At the end of 1983, my wife and I went to Paris to write a movie from which we were promptly fired. Unnable to return home, because we’d rented out our house, we called every name we’d been given. One was Chantal’s, and by chance (“I usually never go to those things. I don’t know why I did that time”) she met us, and we became friends at once. She was radiant that night, as so often, and over the next thirty years she was, alternately and in various combinations, brilliant, funny, warm, ferocious, supremely self-confident, impossible, insane, loving, devoted, loyal, desperate, depressed, elated, and utterly without pretense or affectation. She was a force of more-than-nature; she put mere nature to shame. She was smaller than almost anyone else, and used that to dominate. She would walk in very close, inside your personal space, then come up at you from below, wagging her finger in your face, swallowing you in her enormous, pale blue eyes, saying “Don’t you see?…Don’t you understand?… Don’t you agree?” And whether you saw or understood or agreed or didn’t, you were overwhelmed.

She was a gay woman – proudly, unabashedly – who refused to be placed in either category, would not show her work in “gay” or “women’s” festivals, (“I won’t be ghettoized like that”) but never refused the ghetto of Judaism, and would always show in Jewish festivals. She was, it sometimes seemed, a Jew before she was anything, even before she was a person, and she was more of a person than anybody I’ve known

She operated entirely on intuition; thinking and feeling were for her a single, indistinguishable function. In a restaurant one night, she found herself talking with a man she decided she liked and asked him what he did. When he said he was a production designer, she raised her finger, pointed it at him and announced, “You are going to design my next film.” Which he did, and “brilliantly” she said. And if we ask, Was it as brilliant as what somebody else might have done, someone she’d chosen for more logical reasons?, we’re missing the point. Chantal put her complete faith in intuition. There was no alternative system.

(While making “A Couch in New York,” right after her father had died, she felt the intuition leave her. “I’m too upset. I have no idea what to do. I try to rely on technique, but I have no technique. I look at how Howard Hawks shoots a scene, but I can’t do that. I can’t learn from anyone. I’m lost.”)

On “Jeanne Dielman,” her consensus masterpiece, she was not lost for even a moment. “I can defend every single shot in that movie,” she said once. And, another time: “It was a movie about my mother. I’d spent my life watching her, so I understood everything.” Somehow, this high school dropout from Brussels who had never made a feature film persuaded Delphine Seyrig, one of the reigning sirens of French cinema, to star in her 3hr and 20min study of a single mother who spends her life obsessively washing, cleaning, cooking, turning lights, water and gas on and off, and once a day has sex for money. On the first day of shooting, Chantal told Delphine, “I want you to walk into the kitchen, go to the sink, turn on the water, wash your hands for five seconds, turn off the water, dry your hands on the towel for three seconds, put the towel down and walk out of the room.” Delphine asked her, “What am I thinking while I do this?” Chantal shrugged, “Think anything you want.” “Am I thinking about my son?” “Sure, why not, think about your son.”

Seyrig was not unfamiliar with the avant-garde; she’d made “Pull My Daisy” with Robert Frank, Jack Kerouac and Allen Ginsberg, and she now gently explained to the little girl from Brussels, “Listen, you can’t make movies that way. You can’t just tell actors to do things without motivation.” Chantal, 24 years old, a lower middle-class nobody whose father owned a clothing store, blithely told the star of Last Year at Marienbad, Muriel and The Discreet Charm of the Bourgeoisie, “Just do it. It’ll be fine. You’ll see.” A couple of days later, when Seyrig watched the dailies, she said, “You’re right. It works.”

Chantal was a genius, but not only a genius; she was powerful, but often felt helpless and exhausted. She was worn down by brain chemistry (a lifetime of manic-depression), by Adolf Hitler (who’d put her mother in Auschwitz, an event that profoundly shaped the daughter’s life) and later by the mother’s death and by her own aging that made her breakdowns longer, deeper and more frequent. She was worn down finally by her own strength, and she relished her exhaustion to the last theatrical drop. “Oh, I am soooooo tired. I have to sleeeeeeeep.”

She was haunted by “Jeanne Dielman” the way Welles was by “Kane,” a prodigious masterpiece made in at 24 that she feared she could never equal, much less surpass. “Yes, yes, I made a great film once.” In fact, From the East is as great, as radical, as absolute – a documentary without words or characters, a film of the human soul – and perhaps larger in its concerns, deeper, more profound. Yet it lacks the shocking originality of the earlier film. It could not be the bursting-into-the-world that “Jeanne Dielman” had been, because by then Chantal was already in the world.

Yet in everything she did, every film and installation, she never failed to astonish with her formal rigor and her pursuit of inner truth. I remember watching “Night and Day,” an almost ordinary film by Akerman standards, and feeling that every shot constituted, in a way I could not understand much less explain, an essay on romantic love. Chantal thought in cinema: not just in images (and not at all in story), but in combinations of images, their rhythms, movements and the sounds that accompanied them. She could make these elements “speak” and “mean” in a way that only a handful of filmmakers has ever been able to do. There is a moment in “Night and Day” when the protagonist, a woman with two lovers, is walking along a street while some obviously scored, trivial melody plays on the soundtrack, and then, in the most natural way, unexpectedly, the woman begins humming that same tune we’d assume she couldn’t hear. Suddenly filmmaking and the thing filmed meet in a “place” that hadn’t existed before this; that Chantal had just invented.

Once, when she was nearly sixty, Chantal said, “I didn’t have to be gay. I liked men, too. I could have had a husband, a family.” (She did like men, but never in the excited, besotted way that she liked women.) I said, “You have your films. No one else has that.” “Yes. My films. I’m proud of them, but so what? You have a family.” It was late on a Sunday night in August. We’d just driven in from the country and were parked outside her hotel on Central Park South. She didn’t want to get out of the car and go inside. She didn’t want to go on with her life, the life she had chosen and made, a life that ten thousand other artists would have killed to get. She wanted the other life, the one she hadn’t chosen.

In fact, she’d made a film about that choice ten years earlier, a one-hour masterpiece for French television called, “The Story of a Young Girl at the End of the 1960s.” A Brussels high school student – an uncanny Chantal surrogate played by Circé Lethem, dark, pretty, “ordinary” – a girl with vague intellectual interests but no particular ambition, meets a boy, they talk, hang out, make love (her first, maybe his, too) then she takes him to a party and, as James Brown sings “It’s a man’s man’s man’s world,” she “gives” him to her girlfriend and goes off alone to an unspecified destiny. We know, of course, that she became Chantal Akerman, but the girl in the movie has no such assurances or, it seems, even dreams. There’s nothing she wants except to avoid the fate the world has prepared for her and give herself to the unknown.

Now she’s done that again. She has renounced filmmaking, the world, life itself. I suspect that she did not really mean to die, that is was, as her beloved friend Sonia says, a gesture in the face of her suffering and especially in the emptiness that followed her mother’s death. Whatever she meant, she is gone. Those of us left here without her at least have her films. They won’t get old.

Henry Bean is a writer and filmmaker.