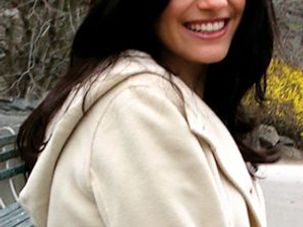 If a blood test revealed that you were likely to contract the same cancer that painfully and violently killed your mother, what would you do? Have radical surgery to prevent it? Undergo frequent screenings and aggressively treat cancer at its earliest signs? Or would you not take the test at all? Jessica Queller shares her answers to these wrenching questions in her new book, “Pretty Is What Changes: Impossible Choices, the Breast Cancer Gene, and How I Defied My Destiny” (Spiegel & Grau). Queller, a vibrant 38-year-old television writer currently working on the CW show “Gossip Girl,” underwent a double prophylactic mastectomy when she learned that she had tested positive for the BRCA gene. The gene, which is most common among Ashkenazic women, put her at high risk for breast and ovarian cancer. Queller also plans to have her ovaries removed, but is waiting until after she turns 40 because she plans to have a child.

Up From the Ashes: A Family Story Unearthed

I never had the religious identity crisis that strikes so many Jewish adolescents and young adults. Never, that is, until last year, when my great-grandparents were disinterred from their graves and summarily dismissed from a Jewish cemetery.

Rivalry In the Time Of Cholera

An Imperfect Lens By Anne Roiphe Shaye Areheart Books,304 pages, $25. * * *|Disease, horrifying as it can be in real life, usually makes for a good read — gripping, intense, fearful and always entertaining. Veteran novelist Anne Roiphe’s latest book, “An Imperfect Lens,” is a riveting work of historical fiction, taking the

When The Streets Were Paved With Tragedy

Bodies and Souls: The Tragic Plight of Three Jewish Women Forced Into Prostitution in the Americas By Isabel Vincent William Morrow, 288 pages, $25.95. * * *|Memory is a central concept in Judaism. When someone dies, we say that he or she lives on in how he or she is remembered by others. Countless museum exhibits, oral histories,

It was a disconcerting thought, a wake-up call that interrupted my reverie as I thought fondly back on four years of teaching second-grade Hebrew school. I realized with a start that the students I’d taught my first year were becoming bar and bat mitzvah this year. They had learned the trope, the system of diacritical markings in the

It is not an easy road — the road from Moab to Bethlehem, from the non-Jewish world into the Jewish. For all the excitement and joy of starting a new life in the Jewish community, there is also, by definition, much new material to be learned and always something to be left behind. Ruth, whose story we will read on Shavuot beginning

Following Another Through Grief

At several points in the novel “A Song I Knew by Heart,” author Bret Lott refers to a character straining under the sheer effort of putting a feeling into a few words — “the work of it,” he writes. The story, which is a modern retelling of the biblical Ruth and Naomi narrative, might as well be called “the work of it,” because of its

Finding ‘Something for Everyone’ in the Mikvah

Water is a ubiquitous and potent symbol. It can mean life, from irrigation to amniotic fluid; it can mean physical healing or inner cleansing, as in the literal or symbolical cleaning of a wound; it can mean movement, as in the currents of a river or the tides of the ocean.It makes sense, then, that water makes regular appearances in Judaism, in

When Sara Charmé-Zane, 13, reminisces about her bat mitzvah, she doesn’t prattle on about disc jockeys. Or outfits. Or presents.After being encouraged by her rabbi to do a “mitzvah project” to mark the rite of passage, she was uninspired by the idea of simply writing a check to a charity. So she began thinking more creatively, searching for

The Spiritual Life of Dreams

Call me crazy, but I am suspicious of anyone who claims to have heard a message from God delivered through his or her dreams. But if anyone could convince me that such a communication is possible, it’s Vanessa L. Ochs.Ochs, a professor at the University of Virginia who is an expert on the history of Jewish spirituality, said that dreaming can be