There Is No Alternative to Day Schools

The day school movement is embattled. After significant growth over the past two decades, overall enrollment at non-Orthodox day schools has taken a slight downward turn in the past several years. Complaints that day-school education is just too expensive have surged. Leading philanthropists insist they get more bang for their buck from Birthright Israel, or from funding Jewish camping, than from offering more costly day school tuition assistance. Highly visible Hebrew charter schools have been started to provide a publicly funded alternative to day schools. And new programs have been launched to rehabilitate supplemental religious or Hebrew schools/Talmud Torahs, so they can serve as better educational options for parents. 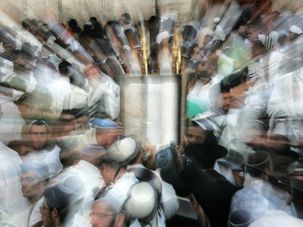 Tikkun olam — perfecting the world — is the belle of the ball of modern Jewish thought. And perhaps it deserves to be.

During his long reign as vicar of Rome, Pope John Paul II oversaw sweeping, historic changes in the Catholic Church and in the role of religion in world affairs. But none of the pope’s initiatives was more fundamental, or more emblematic of the man, than the transformation of Catholic-Jewish relations.The change began with Nostra Aetate, the

Belzec’s Victims Have Waited Long Enough for a Memorial

Between March and December 1942, more than 600,000 Jews were murdered in the Belzec killing camp in Poland. In 1943, to cover up the crime, the Nazis demolished the camp and dug up and burned hundreds of thousands of bodies. Ashes, bones and bodies were buried in chaotic fashion.Ever since, Belzec has been abused. Under the Communist regime, the

(Orthodo)X-Men, On Screen and Off

In our May 23 issue, Ami Eden argued that the opposing forces in the blockbuster film, “X2: X-Men United,” could be interpreted as metaphor for two radical theological responses to the Holocaust — one belonging to Rabbi Irving “Yitz” Greenberg, the other to the late Rabbi Meir Kahane. The good-guy mutants, Eden noted, are led by the