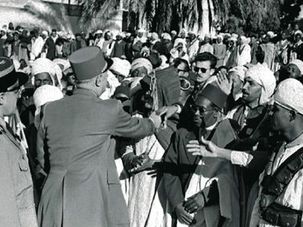 Shades of Algeria on the West Bank

A right-wing government that settlers believed would look after their interests instead enters into negotiations with an organization that established its position through terrorism. Outraged by the prospect of concessions, the angry settlers openly defy their government’s authority. Despite the onset of peace talks, bloodshed continues — and it is unclear how an agreement can actually be reached.

The month of Heshvan — the second month of the Jewish calendar — is traditionally known as “Bitter Heshvan”; the High Holy Days are over, and gloom sets in as the leaves fall from the trees. A new initiative, however, aims to take some of the bitterness out of Heshvan by transforming it into Jewish Social Action Month.The initiative does

With their stereotypically gruff demeanor, truck drivers are not often known for their charitable efforts. But in Fort Atkinson, Wis., truckers are playing a key role in raising public awareness of Niemann-Pick disease, a debilitating genetic disorder that often kills its victims before they reach adulthood.W & A Distribution Services, a

For Synagogue Duo, Stage Is Familiar But Roles Are New

Like many couples today, Rabbi Arnold Rachlis and Cantor Ruti Braier met at work. At first their relationship was strictly professional; the two spent years together serving as the rabbi and the cantor of University Synagogue, a Reconstructionist congregation in Irvine, Calif. Eventually they started dating. When they cautiously told the

Coming of Age in Siberia

When Elaine Berke visited Khabarovsk, Siberia, last November with a mission organized by the American Jewish Joint Distribution Committee, she asked a roomful of local Jewish students if they had had a bar or bat mitzvah. Only one raised his hand. The others said, sadly, that they were too old. Berke told them about her own bat mitzvah

Sailor, Expert In Knots, Ties the Matrimonial One

The June 19 wedding of Sarah Hoenig, 21, and Eric Kinzbrunner, 22, began with all the pageantry one would expect of an Orthodox ceremony. In a pre-wedding bedecken, the bride’s veil was lowered. The marriage contract, or ketubah, was signed at the groom’s table, or tisch, and the blessings were chanted and the glass