Modesty and the Sexy Sheitel

Walk down Cedar Lane in the heavily Orthodox enclave of Teaneck, N.J. and she beckons you to come hither — with her long, luxurious locks and feathery bangs coquettishly hiding her eyes. This is seduction on the street or, rather, in the shop window. The mannequins in the wig shop have some of the sexiest hair in Bergen County, N.J.

Hillary Can Finish What She Started

The way then-president Bill Clinton told it, Edgar Bronfman had “buttonholed Hillary.” The president, speaking at a World Jewish Congress gala at Manhattan’s Pierre Hotel in September 2000, was referring to a meeting in April 1996 between Bronfman and First Lady Hillary Rodham Clinton. 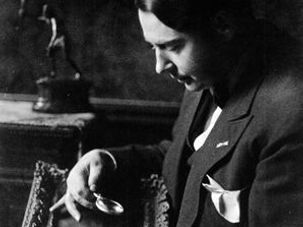 Despite its encouraging title, there are two Holocaust tragedies in “Reclaimed: Paintings From the Collection of Jacques Goudstikker,” an often-stunning book about the recovery of artworks looted from a Dutch dealer. One is obvious: the loss of life and treasured artworks. The other is the subtle message that if you have an art claim, you must be (potentially) rich to pursue it.

Sweden’s museum of modern art is facing its first claim for Nazi-era displaced art: an Emil Nolde painting that went missing when a Frankfurt businessman tried to ship his artworks from Germany in 1939. The government recently decided that the Moderna Museet in Stockholm must resolve the claim for the painting it bought 40 years ago.

A lawsuit over ownership of 14 paintings by Russian artist Kazimir Malevich is currently pending in federal court in Washington. The case is complex, but this much seems certain: The court’s ruling will strongly influence whether American courts remain open to claims for Nazi-looted artworks being held by European museums.

The Restitution Law of Unintended Consequences

In late 2005, the Knesset passed Israel’s first Nazi-era restitution law. The legislation was the work of the Parliamentary Inquiry Committee for the Location and Restitution of Assets of Holocaust Victims, which had been set up by Knesset member Colette Avital after reports that Israeli institutions held bank accounts and real estate belonging to Jews who perished in the Holocaust.

When Max Stern, owner of the Dominion Gallery in Montreal, died in 1987, he was one of the most important art dealers in Canada. As his estate was liquidating the 5,000 works held at Dominion, representatives came across evidence of another, less voluntary liquidation: Fifty years earlier, Stern’s original gallery — Galerie Stern in Düsseldorf— had sold its artwork at a forced auction. Representatives of the Stern estate became determined to restore the legacy of the persecuted Düsseldorf dealer and to locate and recover more than 200 objects that he was compelled to sell in 1937.

The Russian government should make good on its nearly decade-old pledge to identify Nazi-looted art. For years, Russia’s efforts at identifying these artworks in its custody have been contemptible.

The fight to reclaim artworks stolen by the Nazis is pitting the granddaughter of a Holocaust victim against her father’s estate and its main beneficiary, a mental health clinic.At issue are the paintings that belonged to the late Heinrich Rieger, a dentist who lived in Vienna before World War II and bartered with patients who could not afford

In 1956, a year after Auschwitz survivor Michael Taffet became an American citizen, the government of Poland nationalized his family’s property in Debica. The seizure was based on a decree issued in 1946 that permitted the government to take property still considered “abandoned” 10 years after the end of World War II.Polish Jews like