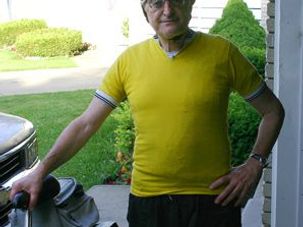 Heshy Josephs, 72, wanted to bike a distance that his family and friends could track on a globe.

Act of Hatred Becomes A Tool To Teach Tolerance

It was an incident that many in Lincoln, Neb., would prefer to forget. But Tom Kolbe is making sure that never happens.In 1995, three teenage boys from the Goodrich Middle School in Lincoln scuttled over the fence of Mount Carmel Cemetery to disrupt the funeral of a 99-year-old Jewish man, shouting “Heil Hitler,” and spitting tobacco

When Leah David couldn’t find the proper school for her daughter, she started her own.“My daughter wasn’t getting it,” David said. A stay-at-home mother to Gittel Bracha, her only child, David had been meeting with teachers and principals in her daughter’s Orthodox school for two years to discuss the young girl’s difficulties

Nearly two decades after the ordination of the first Conservative woman rabbi, the movement’s rabbinical union is calling for dramatic steps to close what it describes as an alarming gender gap in the pulpit.The issue was highlighted in a study released last week that found a number of discrepancies, such as female rabbis earning $10,000

Despite Allegations, Gala Honoring Political Donor Will Go On

Under his bail agreement, Charles Kushner, the real estate mogul and political fund raiser arrested last week for allegedly hiring a call girl in an effort to blackmail a witness, is not allowed to leave his home state of New Jersey. But he will still be one of the guests of honor at a fund-raising gala next month in Israel for Jerusalem’s

On June 26, the woman known affectionately as the First Lady of Israeli Song died at the age of 74.It was indicative of songwriter Naomi Shemer’s place in the Israeli imagination that her death and the national grieving it engendered took over the front pages of Israel’s newspapers for two days running, forcing the intifada and the

A Jewish community school in Margate, N.J., is alleging that it is being systematically and purposefully destroyed by what at first glance seems an unlikely candidate: the local Jewish federation.What began as a dispute over Trocki Hebrew Academy’s financial management has escalated into an all-out community war, with a defamation lawsuit by the

After 40 Years, School Is Finally Out — for the Principal

The final school bell rang for Rabbi Meir Shapiro last week.Shapiro has retired after 40 years as principal of the Arie Crown Hebrew Day School in Skokie, Ill. He leaves behind a powerful legacy for the Chicago Jewish community, which paid tribute to Shapiro earlier this month, when more than 1,200 parents and students attended a Torah

Hours before her troupe’s first public performance, in 2002, Adina Tal faced a quandary unlike any posed to other directors: How would her cast members know that the audience was applauding?The scenario was not uncommon for the director of the theater group Nalaga’at (“Do Touch”), who, since forming the group in late 1999, has been dealt

Hebrew National Certified Kosher — But Not Kosher Enough for Some

Hebrew National became the unchallenged king of the kosher meat industry by marketing its product to non-Jews with the help of several catchy advertising slogans, including the famous, “We answer to a higher authority.” But its success masked a bizarre twist: Most kosher consumers won’t eat the company‘s products.But with the departure