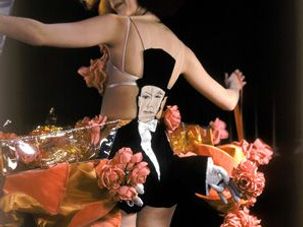 Last fall, two Broadway shows by Jewish-Irish collaborators, Lynn Ahrens and Stephen Flaherty’s “The Glorious Ones” and Mel Brooks and Thomas Meehan’s “Young Frankenstein,” opened on Broadway. These ethnic pairings would have no more significance than a Gallagher and Shean sketch were it not for the fact that the two groups have intersected again and again in our theatrical history, sometimes with results that changed its very course.

Much of the publicity surrounding the recently released film “Casino Royale,” the 21st in the 007 franchise, has dwelt on the new, blond-haired James Bond, Daniel Craig. The actor is no stranger to the spy world; he played a Mossad agent in Steven Spielberg’s “Munich.” The notion of a Jew with a license to kill, however, most likely would have aroused little enthusiasm in either Bond or his maker, Ian Fleming. Most of the 13 original Bond books made a point of disparaging Jews, a feature that was purged from the film versions.

In the Shadow of The Winter Garden

A diabolical terrorist plot had just been thwarted in London, the latest Arab-Israeli war was raging and a storm had struck the city the previous night. But to the crowd gathered at West 51st St. and Broadway in New York City on the afternoon of August 11, the presence of blue skies — nothin’ but blue skies — was evidence of a special providence. Most of the people belonged to the International Al Jolson Society and the occasion was the unveiling of “Al Jolson Way,” a sign commemorating the showman, and cantor’s son, whose greatest stage successes occurred half a block away at the Winter Garden Theater.