Two black caskets, laid out by Hezbollah officials on the sun-drenched tarmac of a Lebanese border crossing, unceremoniously put to rest one of Israel’s most wrenching hostage ordeals. 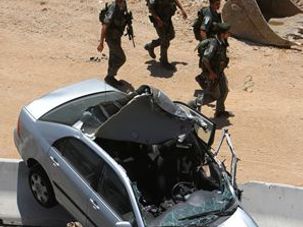 The deadly terrorist attack by an Arab bulldozer driver on a crowded street here Wednesday raised questions anew about how Israeli authorities can protect against attacks by lone assailants from eastern Jerusalem.

Two years after they disappeared into Lebanese captivity, Ehud Goldwasser and Eldad Regev are returning to Israel.

Thousands of mourners turned out Friday for the funerals of the eight students, aged 15 to 26, killed in Thursday’s attack at a prominent yeshiva in Jerusalem.

As Hostilities Heat Up, Olmert Vows To Keep Pressure on Hamas

A surge in bloodshed over the last few days has pushed the battle in the Gaza Strip into a new phase, with Hamas militants expanding their attacks on Israel to include a sizable city and Israel responding with a military operation in Gaza.