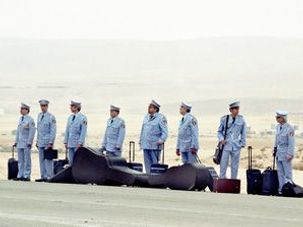 Israeli cinema has made some notable strides over the past few years, thanks to a new generation of documentarians and the bohemian visions of the likes of Eytan Fox (“Walk on Water,” “The Bubble”) and Avi Nesher (the entertainingly ambitious “The Secret,” which may be the world’s first lesbian-Kabbalah-grrl power-yeshiva drama). These filmmakers have taken the country’s film culture in the right direction. But that culture still lacks a defining vision, and the movies that can represent it — the country’s “Citizen Kane” or “Casablanca,” or even its “E.T.” or “The Breakfast Club” — to help it move beyond the impressive but ultimately narrow films of Amos Gitai and a generation of political directors.

Looking Back at the Year in Pictures

In an era in which choice threatens to overwhelm us, the overlooked film has become all too common. Jewish-themed films are, in this sense, doubly cursed. They cross into so many categories that unearthing them — and unearthing what makes them Jewish — is trickier than ever. And yet it is also technology that makes it easier both to produce and discover new films, as the indie filmmakers and the surprising number of viewers who seek them out could tell you.

A Documentary Wrings Poetry From Politics

Almost as inevitable as the endless feature stories about the recent increase in political documentaries is the limpness of the films themselves. A strong documentary demands both surprising characters and a rich ethical imagination; make subjects’ impulses too obvious, as many of these films do, and you wind up with pamphleteering, pandering or Michael Moore.

“The ball tails away from him when it’s on the far side of the court,” Jonathan Erlich whispers to his doubles partner, Andy Ram, as Ram gets ready to receive serve. Ram nods, lightly slaps his partner’s hand lightly and heads up to the net. A minute later, he is flicking a perfect backhand volley into the doubles alley, which catches his opponent flat footed. Ram and Erlich slap hands again, this time more emphatically.

‘Mendy: A Question of Faith” is cinematic proof that putting faith and sex in a movie doesn’t make the film about religion, and doesn’t necessarily make it sexy.In this cheesily staged feature, which is showing through May 26 at Cinema Village in Manhattan, the titular character (Ivan Sandomire) is a Satmar Hasid who has developed some

From a small festival in the wake of 9/11, the Tribeca Film Festival has blossomed over the past four years into one of New York City’s most anticipated cultural events. This year, there are an unusually abundant number of films with Jewish themes, from a consideration of female Israeli soldiers (“Close to Home”) to an exploration

A Road Trip Through the Mideast Conflict

When he’s at his best, Israeli auteur Amos Gitai captures the peculiar pain, and paradox, of individuals filled with national yearning. What a person needs from a country and what a country needs from a person should not on its face have reason to overlap, and Gitai is obsessed with why — and what happens when — people assume the two

Give Igal Hecht credit for trying. Making a movie about theology is tricky enough; making one about a fringe theology requires a miracle. In his ambitious but frustrating documentary, the Canadian filmmaker has taken on that perpetual urban curiosity, Jews for Jesus. By the choice of subject, one expects a flurry of proselytizing and street-side

Breaks from tradition also weigh on the mind of Valérie Mréjen, director of the pleasingly low-key French documentary “Pork and Milk.” Through a series of interviews, Mréjen throws a light on a number of young Israeli men who also happen to be have left the fold of ultra-Orthodoxy: a chef, a cantor with the radical sect Neturei Karta, a

In “Love Iranian-American Style,” director Tanaz Eshaghian tackles the subject of marriage in the Persian-American community, where she interrogates, challenges and otherwise needles her relatives over their views on coupling. The Eshaghians fled the ayatollah’s brutal regime after the 1979 revolution, but the totalitarians they left