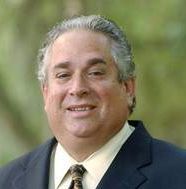 Rabbi Brad Bloom M.S.W. DD is the Rabbi of Congregation Beth Yam in Hilton Head, SC. He writes a newspaper column on religion in the world.