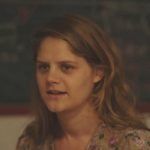 Kate Rosenberg is an employee of Breaking the Silence and a board member of the New Israel Fund Australia.