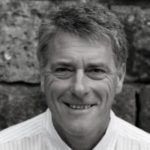 Steve Meacham is a senior features writer whose work has appeared in many Australian and British publications. He has also written several authorized biographies.