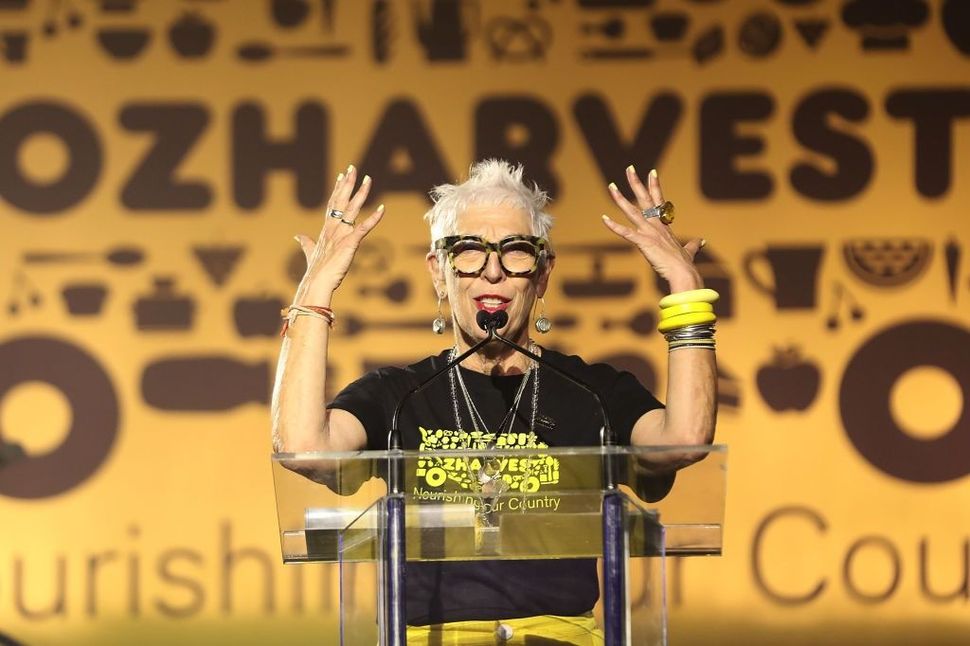 Ronni Kahn CEO and founder of OzHarvest speaks on stage during the Oz Harvest CEO Cookoff on March 19, 2018 in Sydney, Australia. Image by Getty Images

The film is a raw, emotional account of two years in the life of OzHarvest founder Ronni Kahn as she wins the support of Camilla, Duchess of Cornwall, and battles against the “Jamie Oliver juggernaut” to ensure her mission of feeding the world’s homeless remains unsullied. Goldberg, a former journalist turned film-maker, is reluctant to talk about the industry awards (“I don’t know what they’re worth, to be honest”), but he’s justifiably proud of Food Fighter; One Woman’s Crusade Against Waste — not least because his journalistic instincts took his film crew across the globe following a rapidly emerging drama.

Kahn is the South African-born, kibbutz-graduated entrepreneur who founded OzHarvest in Sydney in 2004, disgusted with how much edible food goes to waste each day in Australia when it could feed the homeless.

Goldberg readily admits Food Fighter is something of an accidental success. “I went to Ronni three years ago for a film I wanted to make about homelessness in Australia. But a day later, I thought, ‘Hang on, I’m making the wrong film. She’s got attitude. She’s passionate. She’s principled. And she wears these enormous glasses!

Every story in my world (documentary) needs a protagonist. When I asked Ronni if I could make the film about OzHarvest, she said, ‘As long as it is not about me’. I told her that it would be about food waste and homelessness, but that it had to be a character-led documentary.”

Goldberg, who is Head of Factual at Mint Pictures in inner-city Sydney, assembled a team that began filming in Canberra with Kahn’s meeting with then-Environment minister, Greg Hunt.

Then came a surprise invitation for Kahn to attend a meal when Prince Charles and Camilla visited Australia in autumn 2015. Goldberg confesses he was just expecting glitz and glamour, but Kahn emerged saying Camilla had shown surprising interest in bringing the OzHarvest concept to Britain.

Eight months later, Goldberg says, the much-maligned Duchess of Cornwall had agreed to be patron of UKHarvest, having established a board and appointed a chief executive. “I started out making a modest film about homelessness in Australia. But we ended up going to Thailand, South Africa, and London,” Goldberg says. “Suddenly it had global reach.” However, things didn’t go so well when celebrity chef Jamie Oliver’s foundation came aboard in London. OzHarvest’s signature fundraising event is its CEO CookOff, when industry chiefs cook meals for the homeless and needy. In March 2018, it raised over $2 million (or 4.2 million meals for the homeless, according to OzHarvest).

Oliver’s corporate team, unfortunately, took it in another direction. Instead of feeding the homeless, Oliver’s crew fed ‘local heroes’. “Jamie’s juggernaut steamrolled Ronni’s charity,” Goldberg insists. “That’s what we in the documentary world wait for. We film for 100 hours and get shit. Then all of a sudden, we get conflict.”

“In a documentary, there has to be conflict, drama, comedy and entertainment. It can’t just be worthy preaching.”

The scene that sums up the film, Goldberg says, is “the look on Ronni’s face when she walks into the London CEO CookOff.…Ronni [was incensed] and we captured that. It’s powerful stuff because she wasn’t willing to compromise her principles.”

Goldberg’s career as a filmmaker includes the three Bushwacked! series for ABC3, which won the 2014 Asian Kids TV Show of the Year, plus two Logie nominations in 2015 and 2016.

But the body of work he is most proud of is the two documentaries that screened on the ABC about sexual abuse within Melbourne’s ultra-Orthodox community. Code of Silence, which won the 2014 Walkley Award for Best Documentary, followed Manny Waks’ bold campaign — backed by father Zephaniah — to go public with his allegations of child sexual abuse and bring the perpetrators to justice, despite the family’s ostracism from their community and the stigmatizing from many rabbis. “Ninety percent of the work I do is influenced by my journalism,” says Goldberg, a former editor of the Australian Jewish News. “Of all the credits and awards, the Walkley means the most to me.”

The follow-up, Breaking The Silence (2015), continued the story from the Child Sex Abuse Royal Commission to the streets of New York where Waks confronted one of his abusers.

“These rabbis who refused us access were now being forced to answer questions at the Royal Commission. That was staggering, just unbelievable. Several had to resign.”

Now Goldberg is filming another crime story close to his heart: the cold case murders, from nearly 30 years ago, of three Aboriginal teenagers — Colleen Walker, her cousin Evelyn Greenup and their friend Clinton Speedy-Duroux.

All three lived in the tiny timber town of Bowraville, south of Coffs Harbour on the NSW mid-north coast, and were murdered within five months of each other.

Following an investigative series by Dan Box of The Australian, the NSW Attorney-General referred the case in 2016 to the NSW Court of Criminal Appeal, hoping to retry a man who had previously been acquitted — at separate times — of the murders of Greenup and Speedy-Duroux.

The families of the victims have campaigned for 25 years to have the three cases heard together but have been thwarted by NSW’s double jeopardy laws (which means no-one can face trial twice for the same offence).

“This is unchartered legal territory,” Goldberg explains. If a retrial is ordered, “this will dominate the headlines for months to come.”

Goldberg rang Box after following his investigation, proposing a documentary. “This isn’t a True Crime story I’m making. It’s a story about racism,” he says. Had these three children been white, he claims, justice would have been served long ago.

Goldberg’s five years travelling remote Australia for Bushwacked! was enough motivation. “I saw things I couldn’t believe. This was a chance to tell an important indigenous story. It just screamed out at me.”

“For the next month, though, the focus will be back on Food Fighter. “When Ronni said yes, she had no idea what she was letting herself in for,” Goldberg admits. The film is a remarkable tribute to her determination, energy, vision and forceful personality.

Food Fighter premieres at Sydney’s State Theatre on June 3 and will be followed by a limited theatrical release. Local screenings can be organized via fan-force.com.

Steve Meacham is a senior features writer whose work has appeared in many Australian and British publications. He has also written several authorized biographies.