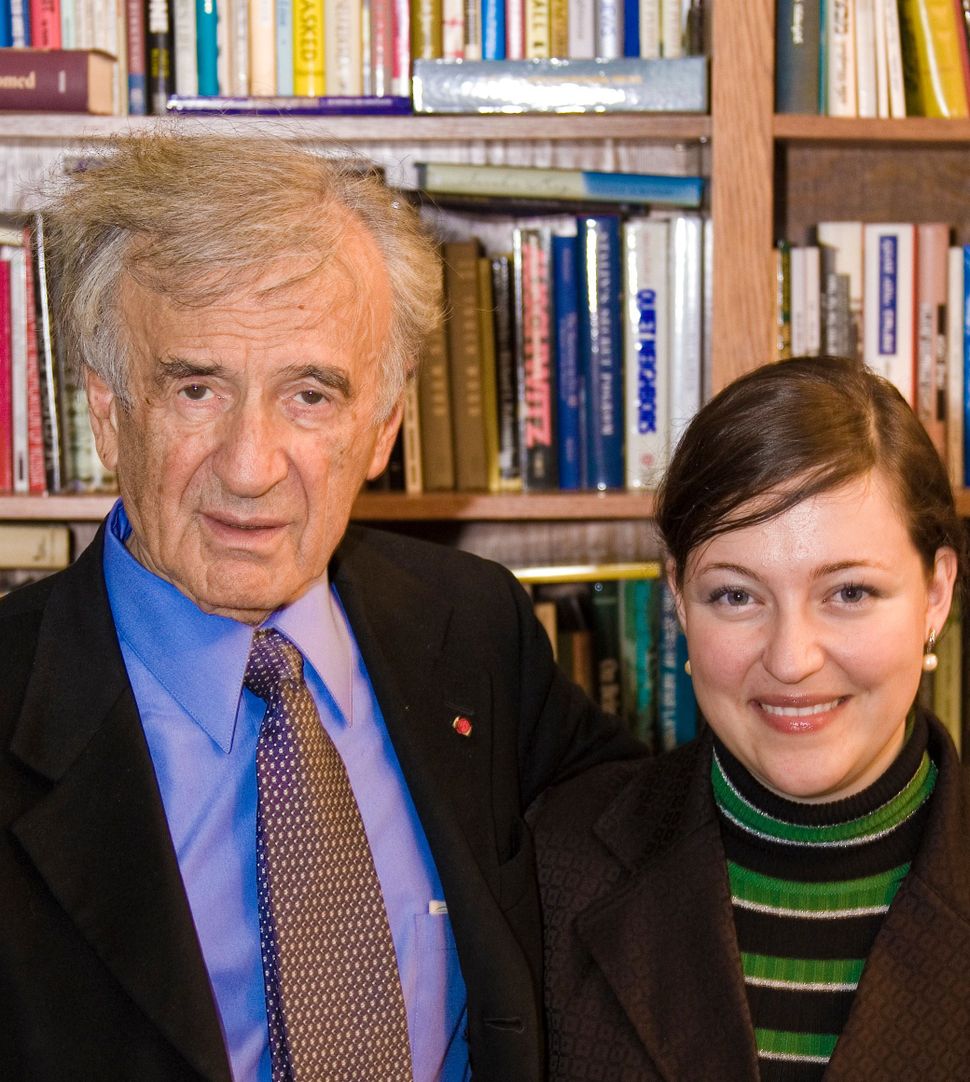 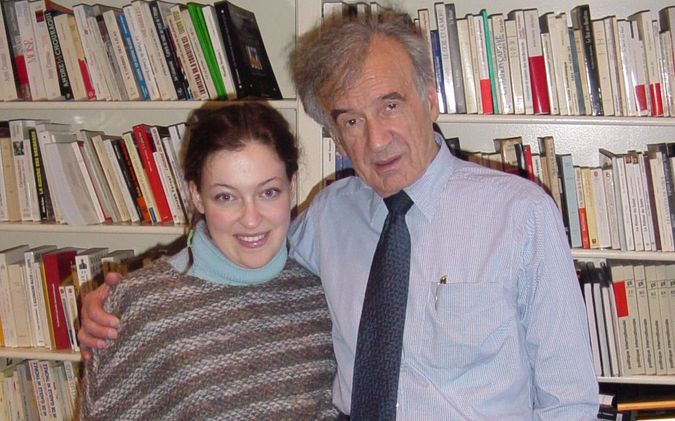 For the 85th birthday of Professor Wiesel, I was asked to write a small essay to present my first encounter with Elie Wiesel. This article was published in the book “Take a Teacher, Make a Friend,” special edition for the 85th anniversary of Elie Wiesel, published by Boston University in 2014. Today, after his death, this text resonates within me along with the sadness to have lost one of the last defense, one of the last “rampart” against the depths of oblivion…ZAL”

I was hit by a car on my way to meet Professor Elie Wiesel for the first time. It happened just after I arrived in Boston from Paris, as I stepped out to cross Commonwealth Avenue. The car knocked me down, and I felt an intense pain in my right leg. I insisted that I did not want to go to hospital when an ambulance arrived—I couldn’t be late for my meeting. That month, March of 2003, was supposed to be one of solid memories and moments, yet it began in an ineffable glow.

Despite my reservations, an ambulance took me to hospital. I was far from home, I didn’t speak English; I was terrified. A nurse asked me very distinctly, “Do you understand me? Have you hurt your head? Do you know your social security number?” I looked at her and told her in a pitiful Franglish, “I don’t have a number, and I am afraid miss my meeting with Professor Wiesel.” Was it because of the way I pronounced W[ee]sel? She looked at me as if I had said something disturbing, and I overheard her telling her colleague, “This girl must have a serious concussion.” Her colleague came to me and made me repeat myself until she understood, “Ah, you mean to say Professor Wiesel! The famous Nobel Prize winner. Are you here in Boston to meet him?” She smiled gently but with doubt in her eyes, “We would all love to meet him, you know, but for the moment, you need to stay in hospital.”

I was devastated, having missed the meeting of my life. This pain felt greater than my physical. I asked permission to call Professor Wiesel’s office to let them know about my accident. As I explained the situation to Mrs. Martha Hauptman, Professor Wiesel’s assistant, she tried to calm me down. Professor Wiesel would try to contact me at the hospital. So, I decided to forget my pain and just sleep. I did not want to call my parents and tell them about the accident, as I did not want them to worry about me. It was clear that for the moment I needed to deal with my pain alone.

I don’t know how many hours passed, but I remember hearing whispers and murmurs in my room. I opened my eyes: many nurses were in the room looking at me and talking to one another as though they were sharing an incredible secret. Then, the first nurse I had met handed me a telephone, saying, “Ms. Kessous, Professor Elie Wiesel calling.” I sat up, forgetting the pain, forgetting my brain, forgetting the nurses, and took the phone.

“Bonjour, Monsieur Le Professeur…euh….” I don’t remember many of the details, though I do remember him wishing me, in French, a hasty recovery, and reassuring me that he was saving a spot in his classroom for me. I equally remember the glow on the nurses’ faces when I hung up the phone. They looked at me, not just as a lone French woman in a hospital bed, but as someone fortunate, someone truly blessed.

The first day I met Professor Wiesel, I was in a wheelchair, and hated it. I wanted him to see me as a theater performer coming to work on the plays he wrote—not as a patient asking for pity. I didn’t know exactly how to work my wheelchair, and it took me a very long time to get to the classroom. When I arrived, all the seats were taken, and I wished only to disappear underneath my wheelchair. At that moment, Professor Wiesel arrived and smiled at me, “Bonjour, Mademoiselle.” I was speechless, and he welcomed me, kindly offering me his own seat.

All the students looked at me, and I felt again the same glow I had felt with the nurses. I could just barely whisper, “Oui, Monsieur Le Professeur,” and I moved my wheelchair next to his chair.

“Mademoiselle Kessous isn’t it? Do you want to introduce yourself?”

I took a deep breath and said, “My name is Guila Clara Kessous and I come from Paris. I am a theater performer from the French Conservatory where I received an MBA from the French Business School, ESSEC, majoring in cultural management. I am passionate about theater and came here to work on a PhD with Professor Wiesel about the plays he wrote and to see how the testimony of a Shoah survivor can be transmitted through performing art and how aesthetics can serve ethics.” I knew my presentation by heart, but still there was my heavy French accent, and I could see other students hiding their smiles.

Professor Wiesel looked at me and said, “Welcome,” and once again I felt the “common glow” permeating the air. During our first meeting in his office, he asked, “Do you know this play?” He handed me a script entitled “Once Upon a Time” while explaining that he wrote it in 1968 and that he was sure that I would find it interesting. Indeed, I did. Surprisingly, it was unpublished. The publisher must not have considered the work valuable enough as Professor Wiesel was not a playwright and his works for theater had never been subjected to a critical study.

Earlier in his career, Professor Wiesel praised the value of performing art: “Since the end of WWII, the most important and meaningful words have been said on stage: Brecht and Beckett, Sartre and Camus, Hochhuth and Ionesco influenced this generation as much as novels had influenced the previous one, and perhaps more.” But in 2003, he admitted distrust: “Theater is not my tradition. If I have resorted to theater, it is above all as a means: a vehicle to transmit an idea that I wish the public could collectively experience and see in a less realistic manner than that of a dialogue between the author and the reader of a book. We live in a century that places too much importance on the image, and I mistrust it just as I mistrust theatrical illusions. I have written for the stage, because I have had no other choice.” 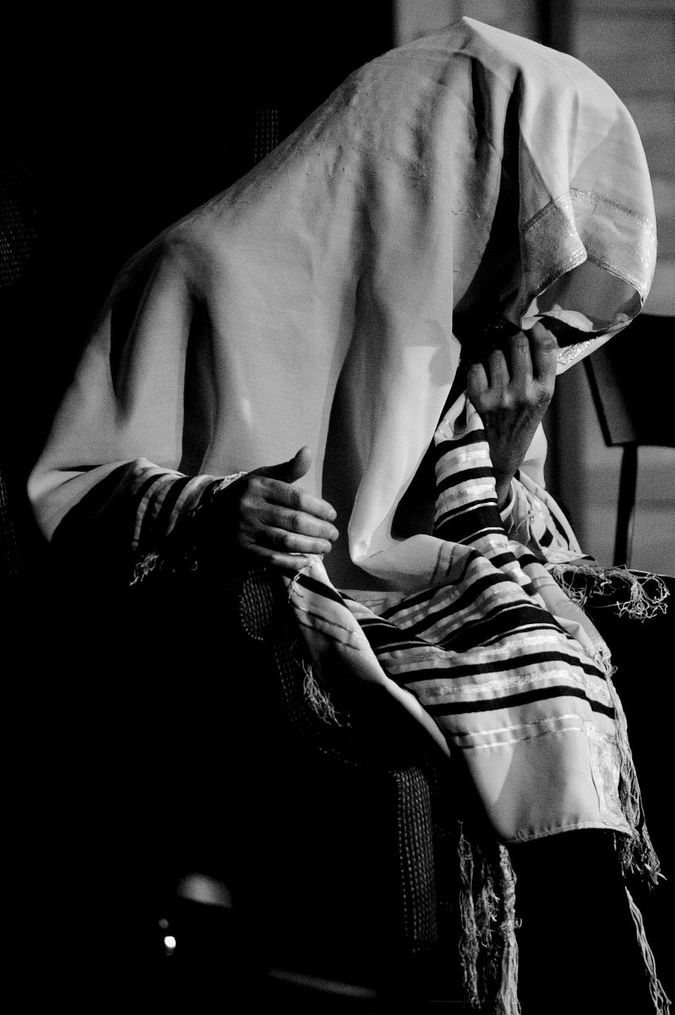 It goes without saying that this concept of having “no other choice” fascinated me in my research. It is my opinion that the use of the dramatic genre is not neutral for an author, such as Elie Wiesel, who both practices his faith and desires to “show” the connection with God through the stage, daring to ask the question “Why?”

After finishing my PhD at Boston University and postdoctoral studies at Harvard University, my book Elie Wiesel Theater: Staging the Ineffable is to be published, in honor of Professor Wiesel. Having been uniquely entrusted with the rights to stage all of Professor Wiesel’s pieces, I provide in the book not only an analysis of his plays but also more practical material such as pictures, programs, scenography, and explanations. I believe Professor Wiesel had “no other choice” than to resort to theater because of a notion of “signify-sense.”

Theater is still an influential media in which the message transmitted can be received without too many distortions. “Signify-sense” is a neologism that means there is a scientific meaning, a significance of the situation dealt within a play (a context, many characters, a plot, etc.) that makes sense from an emotional and global point of view.

Things like remembering the name of a character or the color of the landscape are unimportant. The objective elements work together, producing a global emotional idea, a certain “glow” about the story being told that is the essential ingredient. Theater is perhaps the only art that allows for the tradition of pilpul (the holy dialogue of havruta, the conversation between two rabbinical students studying together) to analyze and link the hermeneutic tradition of the Midrash. In theater, you, as a spectator, deal with and experience a situation until becoming a spect-actor, glowing with common hopes, fears, and goals. 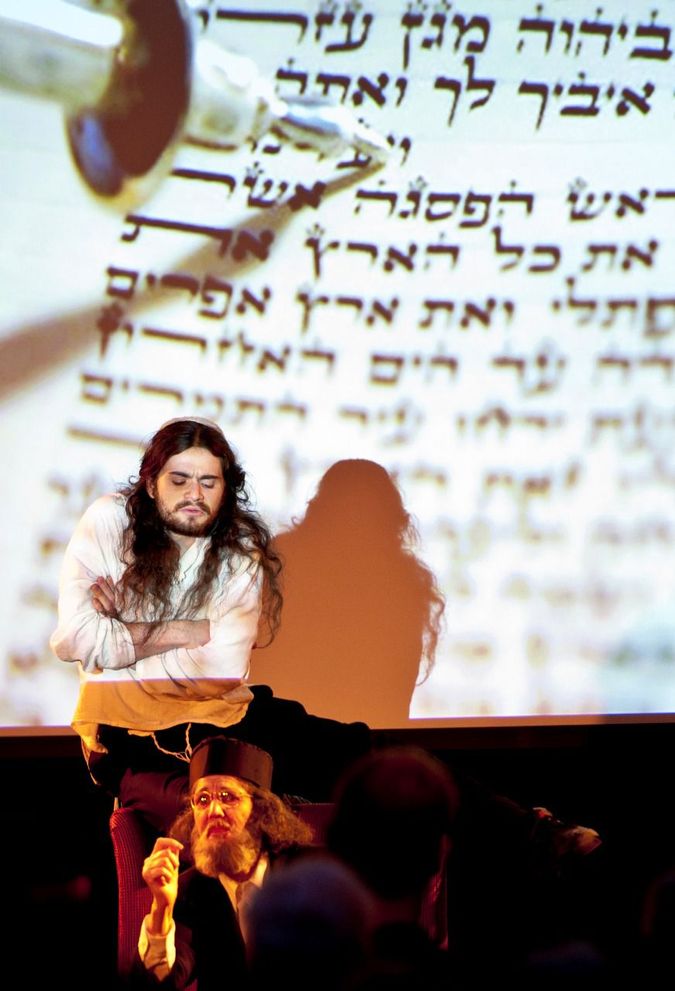 By using theater, which is the art of the dialogue shown to others, one is able to share the glow that people feel when they suddenly have a direct connection with something or someone with a feeling of deference, respect, and admiration. Theater usually involves two people who speak and one who listens—fewer speakers if it’s a monologue. Yet, for good theater, one also needs a cause to defend in order to create what can be described as a “common glow” of collective recognition.

I learned the value of a theatrical approach in reflections on the Holocaust thanks to my car accident and the reactions of the nurses and the students on that first day of class. When I arrived in Boston in 2003, the idea of working with Professor Wiesel was something abstract in my head. However, as I observed the “glow” of others and myself on that day and thereafter surrounding interactions with the Professor, I came to realize that theater is powerful in that it provides an opportunity to bequeath communal experiences and collective memory. When viewers can exit and say, “We saw and we can attest to the truth of this atrocity,” a mode of knowing beyond purely the intellectual has been achieved. And this mode, as a precursor to ethical modes of knowing, is extraordinarily profound….and desperately needed against Holocaust denial today.

It was a privilege and joy to work side-by-side with Professor Elie Wiesel. I would like to express again my gratitude towards him for having accepted me as a student, for having gifted me and the world with his ouvres, his glow.

Guila Clara Kessous is a producer, director, and actress. She completed her PhD under the direct mentorship of Elie Wiesel during more than 7 years working on published and unpublished plays written by the author.