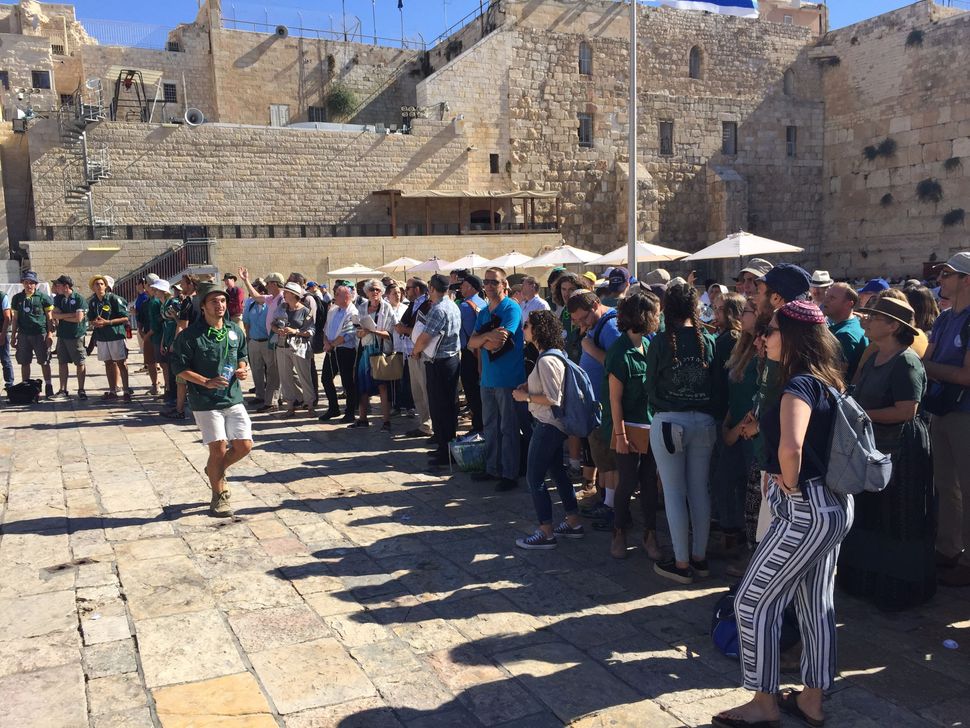 Thursday morning, I joined hundreds of women and men as we stood in solidarity at Judaism’s holiest site. We danced in celebration of a new Jewish month (Rosh Chodesh), we lifted our voices in song, and we demanded that the Israeli government implement a plan to which it had already agreed.

Protests are familiar to me. I have often felt called to march or stand up or speak on behalf of the marginal or disenfranchised. Being a rabbi is for me many things, but among them it is a call to see justice done.

This Thursday, though, I didn’t visit the Kotel with eagerness nor hope for change but instead with trepidation. I was 21 years old the last time I prayed with an egalitarian group on the Kotel plaza. I was a Junior in college studying at Hebrew University for the year and exploring a deeper religious life which brought me, on Shavuot, to the newly formed Conservative Yeshiva. We learned Torah and rabbinic sources throughout the night, noshing on Bamba and rugelach, sipping soda or coffee. At first light, we began to make our way through the streets of West Jerusalem toward the Old City. I remember the anticipation I felt, the excitement rising in me as students at various yeshivot spilled into the streets forming rivulets and then rivers of bodies. We flowed toward the Temple Mount, one people making its ancient aliyat haregel, our sacred pilgrimage.

A group of us, men and women together, gathered in the Western Wall plaza at daybreak, well back from the gender-segregated sections, and began to pray. Jerusalem, at sunrise, is golden and pink and as a young college student thirsty for Torah and connection, my sleep-deprived body filled with caffeine and adrenaline, I drank it all in with innocent delight.

The sun was fully in the sky as some Ultra-Orthodox men began to notice our group. At first they seemed surprised, perhaps even curious. We continued to raise our voices in prayer and song: Hallel, the book of Ruth, Torah, Haftarah – and as we prayed the crowd around us grew. More of them had finished their prayers and stopped to gape on their way back to the Jewish Quarter. The few became dozens, dozens became more than a hundred and still their numbers grew. They surrounded us. The shouting began. They called us names: “Goyim! Traitors! Nazis!” Women were pushed to the ground by men who refuse to touch women. I was hit in the chest with a bottle of ice. The police came but they didn’t know what to do. They encircled our group but could not contain the vortex swirling and pulsing around us. I had never seen anything like it – in the eyes of these Jewish men was pure hate, anger beyond description. Rage.

Eventually, the police escorted us to the bus station beyond the Kotel plaza. We resumed our prayers. We were followed and surrounded again. The morning concluded on the ramparts of the Old City walls, high above the Kotel which was barely visible off in the distance.

In the nineteen years since, I have been to the Kotel. I’ve brought my family, stood with my seven-year-old son, our foreheads pressed against the stone. I’ve led shul trips and done my best to create an atmosphere of holiness for my congregants as they experienced the Western Wall for the first time. But since that day in 1997, the Kotel plaza, the Ultra-Orthodox shul that has infiltrated Israel’s national holy site, has not been holy for me but profane.

Recently, the Masorti and Reform streams, together with Women of the Wall struck a deal with the Israeli government. Yizhar Hess, Executive Director of Israel’s Conservative Movement describes it this way:

“Finally, there will be one Kotel: Walking through one common entrance, visitors will be able to choose which part of the Kotel they would like to pray or visit – the Northern Plaza of the Western Wall which respects Orthodox custom, or the Southern Plaza that respects the egalitarian traditions of both Conservative and Reform Judaism. The two plazas, north and south, will provide Torah scrolls, siddurim, tables for Torah reading and everything necessary for every man and woman to pray as they see fit. Every month, Women of the Wall will be able to pray, undisturbed in the Southern Plaza.”

The new plan was to be implemented months ago. The government has stalled. Haredi and religious nationalist forces have combined to block egalitarian prayer at Robinson’s Arch. So, this past Thursday we returned to the Kotel plaza. And I went because I am here in Jerusalem. And despite my fear, despite reliving that trauma of received hatred and violence at the hand of my fellow Jew, I went to stand for a better Israel and a fuller Judaism.

The morning went mostly as expected. The Women of Wall, three hundred strong, sang and prayed. They smuggled in a Torah and celebrated a bat mitzvah. A woman blew a whistle at them, over and over again. Others chanted epithets. Men, who erect mechitzas so as not to see women during prayer, stood on chairs and shouted into the women’s section. One of them tore up a prayer book and scattered the pieces to the wind. Afterward we gathered as one community in the common plaza, women and men, to sing Psalms for Rosh Chodesh. We were unmolested this time (though a similar gathering a few weeks ago did not fair so well). We closed with Hatikvah. 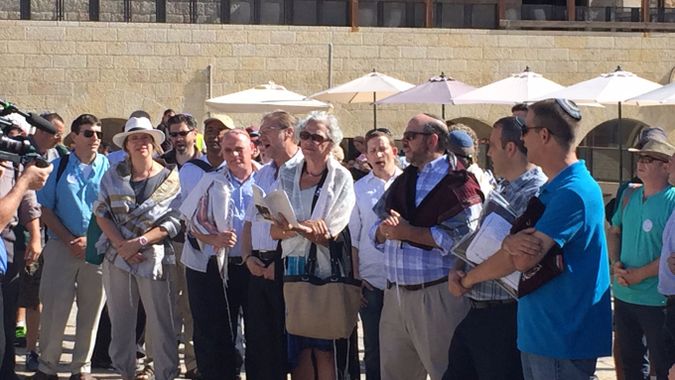 As for me, I’m glad to have returned to the Kotel plaza. I don’t know when, if ever, it will again feel holy. But the best part of the morning wasn’t the egalitarian minyan; it was standing with the other men, many of them my fellow rabbis, in the plaza and echoing the prayers of Women of the Wall. How I strained for a better view. How I yearned to cross over into that space and touch that Torah and raise my voice in song. It is the yearning I will remember. A yearning my female friends and colleagues know all too well.

Rabbi Daniel Cotzin Burg has been Rabbi of Beth Am Synagogue since July of 2010. He blogs at theUrbanRabbi and has helped to articulate a congregational vision for Beth Am’s community engagement initiative and “In, For Of, Inc.” an independently registered non-profit affiliated with Beth Am which seeks to “build Reservoir Hill relationships.” Rabbi Burg lives near Beth Am with his wife Rabbi Miriam Cotzin Burg and their two children, Eliyah and Shamir.