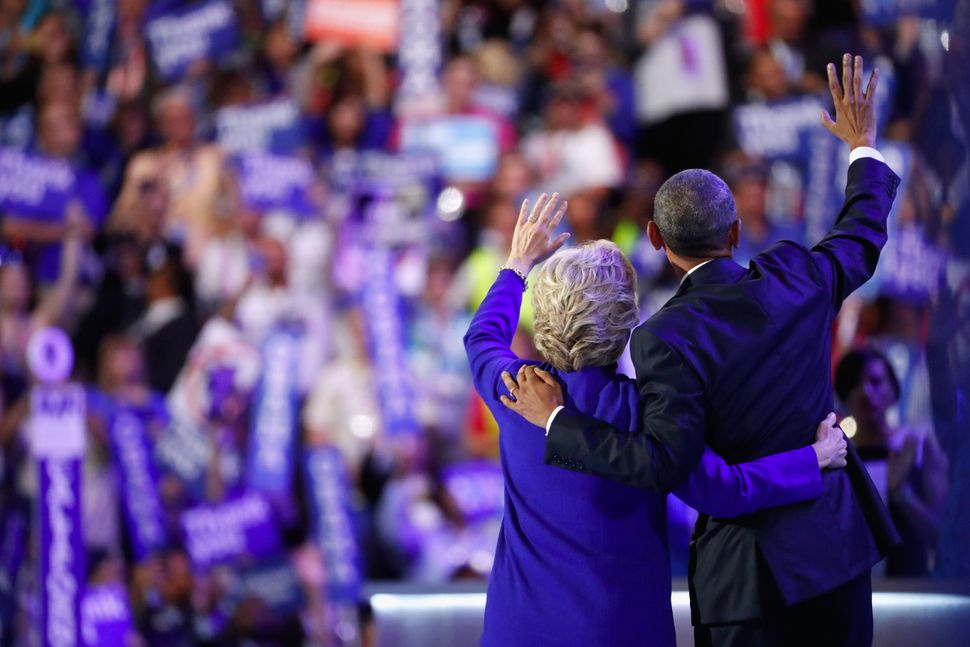 “Watch out for the shattered glass!” an usher cheerfully warned as we streamed into the Wells Fargo Center yesterday.

It was hokey, but I smiled, feeling a shiver of delight and awe despite the 90-plus degree heat.

I came to the Democratic National Convention because I couldn’t resist the opportunity to be a witness to this historic moment – a female presidential candidate receiving the nomination of a major party for the first time in American history. As a feminist historian, this hyped, loud, sweaty gathering of tens of thousands is more exciting than (albeit vaguely similar to) the best rock concert I’ve ever attended.

But what really inspired and energized me last night was not the act of witnessing, nor the thrill of being “in the room where it happens,” but the vision of history as a collective, active responsibility that was put forth over and over throughout the program.

Yesterday’s theme was gun control and security, and the evening’s speakers began with brave and teary testimonies from family members of victims of violence in places like Newtown and Orlando. Standard emotional fare for a political convention, to be sure – and yet I was struck by the subtle but significant twist to these testimonials.

These speakers (and they were mostly women) acknowledged that they stood on the stage because something awful that happened to them. Erica Smegielski (daughter of Sandy Hook Elementary principal Dawn Hochsprung) even began by saying, “I shouldn’t be here tonight. I don’t want to be here tonight… But, my mom was murdered, so I’m here.”

But the message did not end with victimhood or a sense of history acting upon them. Rather, the thrust of their speeches was of the responsibility to take action that these experiences compelled, and the relationship of their personal tragedies to the larger political process. In other words, a vision of history as a process of change in which we are obligated to act.

This vision came to fruition most clearly in Obama’s rousing close to the night. His powerful, optimistic speech ranged from allusions to the 2004 speech that launched him onto the national stage, to echoes of his 2008 campaign language, to a strong condemnation of Trump, to admiration of Clinton’s steady determination. Throughout, he used the language of collective responsibility. “American isn’t about ‘Yes he will,’” he declared, “it’s about ‘Yes we can!’” Democracy, he insisted, is about “the capacity to shape our own destiny.”

Perhaps most importantly, he reminded the nation that the work of history unfolds every day, not only in these prime time historic moments. “Democracy works, America, but we’ve got to want it. Not just on election day, but every day in between.”

Of course, the whole exercise of the Convention represents and enacts this vision. As striking as the thundering speeches from the podium is the buzz of activity throughout the arena, as tens of thousands of people of all ages, races, abilities, and backgrounds rub elbows, connect, debate, and take their places in the democratic process with pride. My first interview of the day was with a delegate from Missouri, in her early 30s, and a proud representative of the LGBT community. Her road to Philadelphia began when she Googled “How to become a delegate.”

In my day-to-day work as a historian and the director of the Jewish Women’s Archive, I fight against the misconception of history as a series of important dates and famous figures, urging instead for a vision of history as a dynamic process of change over time, unfolding each day through the agency of ordinary, extraordinary people – all of us – working together. What we’re witnessing in this particular historic moment – a moment which the media still too often insists on framing in individual, lofty terms as a “coronation” – is actually not a moment but a process, fueled by years of activism by social movements composed of many people who made this happen.

Obama is humble enough to acknowledge this. “You carried me,” he said last night. Yes, we did. And I’m so proud to be a schlepper of history.