The Last Jews of Salzburg 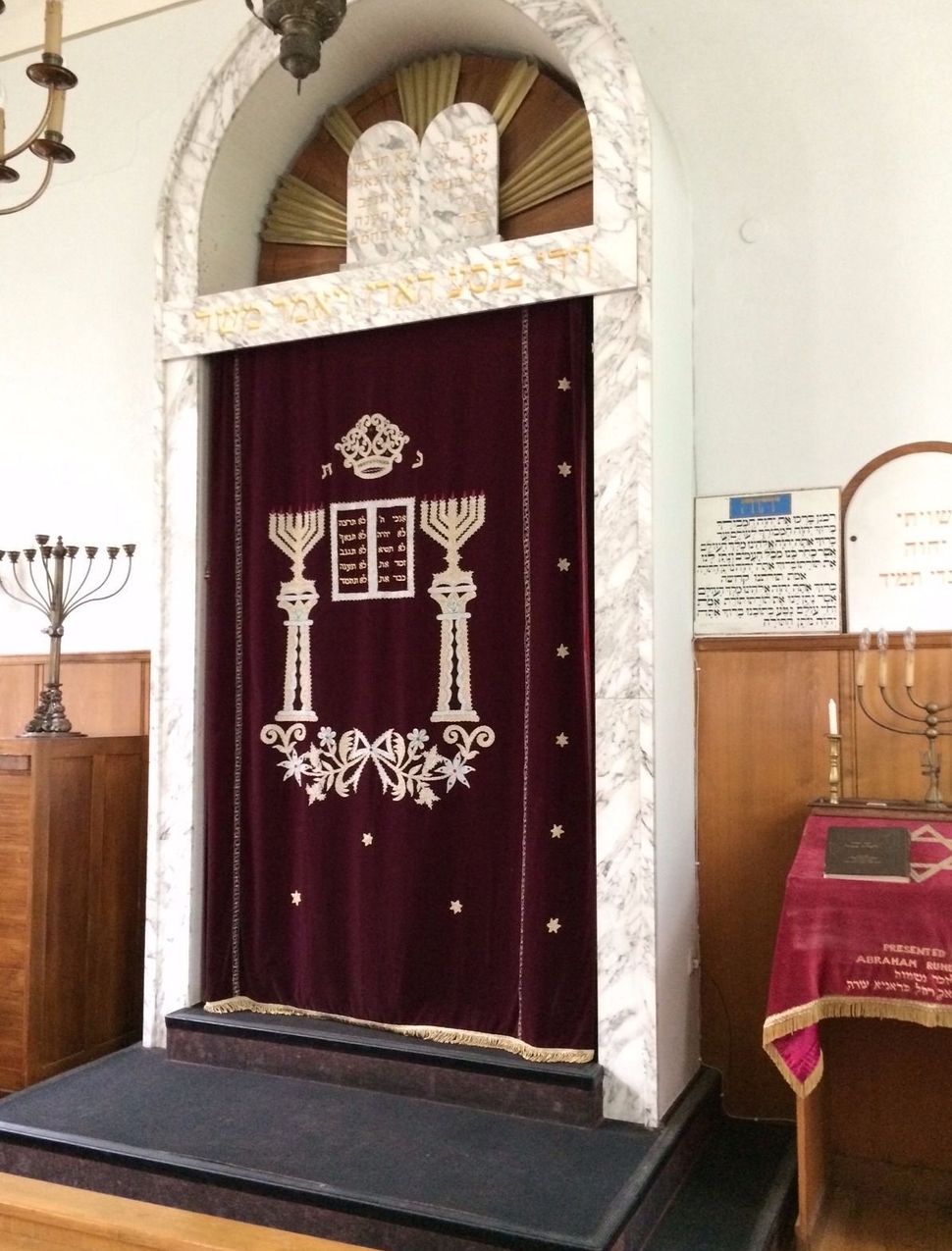 The ark at the synagogue holds four Torahs, two from the cache of Jewish artifacts stolen by the Nazis from temples across Europe. Image by Courtesy Linda Burghardt 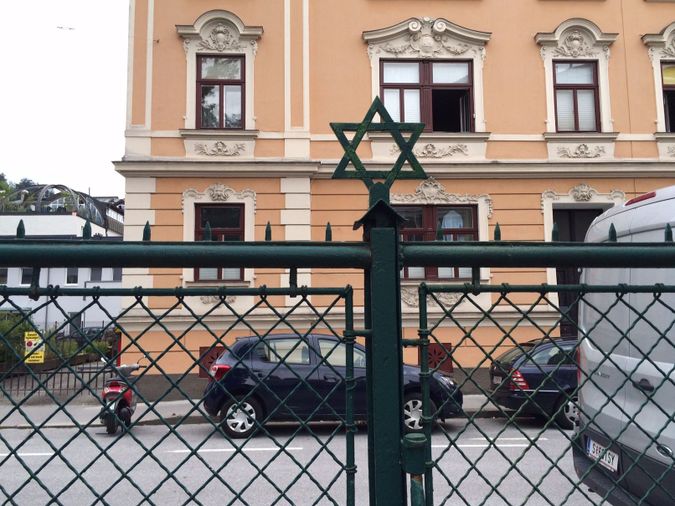 The two locked gates leading onto the synagogue property are decorated with a Star of David, which were both recently spray-painted yellow. Image by Courtesy Linda Burghardt

Like many travelers with a purpose beyond simply sightseeing, I journeyed to Europe earlier this month with a specific set of expectations. Destination: Salzburg. Itinerary: A three-day United Nations conference at the city university. Objectives: Deliver a talk and meet others in my field. My agenda did not include getting swept up into the local history — or my own — yet on my first night there, after enjoying what I was sure was the best Wiener schnitzel in this ancient city, I found myself in a little street called Juden Gasse.

“Yes, this is where the old synagogue was in the Middle Ages,” said one of my dinner companions, a history professor who had also come to Salzburg for the conference, as we were jostled by tourists in the narrow lane.

“What happened to it?” I asked.

“And threw them out?”

He shook his head. “They burned them to death. But other Jews found a way into the city and kept the synagogue going for another 50 years. But at the end of the 14th century, they were accused of stealing from the church, and the Jewish community was destroyed.”

“Not this time. The Jews were kept out of Salzburg for the next 350 years.” 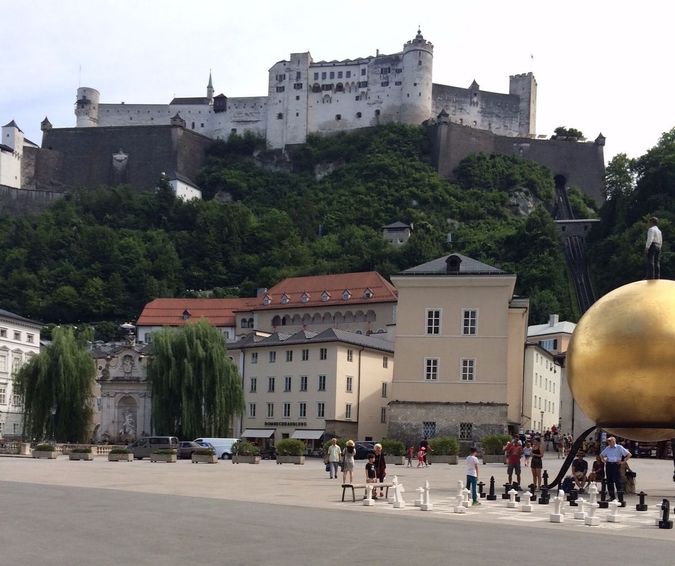 A view of the Festung Hohensalzburg, literally the High Salzburg Fortress, sits atop a hill and overlooks the Baroque towers of the city. Image by Courtesy of Linda Burghardt

It was hard to take this in. This was far longer than the United States had even existed. “And the synagogue?” I asked.

“The synagogue property was given to the Archbishop.”

Today, it is the site of the Aldstadt Hotel, a modern lodge built on the foundations of the Höllbräu Inn, which had operated there for centuries, and WAS rumored to have the remains of a mikvah in the cellar. Yet just down the street is a Christmas ornament shop. And a few meters away you can buy T-shirts that say, “There are no kangaroos in Austria.”

No kangaroos. All well and good. But there are also almost no Jews.

But I didn’t know that yet. That morning had been the start of my conference: “Children and War: Past and Present,” and as I listened to the keynote speaker, Gloria Atiba-Davies, a prosecutor from the International Criminal Court in The Hague, I thought only of the tragedy of today’s youth caught up in armed conflict. I attended sessions on child soldiers and gave my presentation on the intergenerational transmission of trauma. I listened to talks on Israel and Palestine, and on humanitarian assistance in postwar Hong Kong.

But in the evening, haunted by the discoveries of the night before, I went back to the Juden Gasse. There I found a memorial plaque with a quote from Theodore Herzl, the founder of political Zionism, from 1895: “I spent some of the happiest hours of my life in Salzburg,” it read in German. “I would gladly have stayed in that beautiful city, but as a Jew I would never have been able to gain a judicial position.”

I was both touched and horrified at the statement, and the fact that it has been made public. Was this courage? An attempt at atonement? A warning?

Although I had kept it to myself, I was no stranger to Austrian anti-Semitism. My parents were Holocaust survivors from Vienna, and I’d had to overcome some hesitation about coming to Salzburg. I knew there had been a concentration camp in the city, an extension of the Dachau camp outside of nearby Munich. And that reunions of Nazi SS veterans still took place in Salzburg. And hadn’t the taxi driver, when he brought me in from the airport, told me to make sure I visited Hitler’s summer home, just half an hour away, as it was the best sight in the area?

At the conference the next day, I tried to put this all in perspective as I listened to papers about young refugees from Syria and displaced children from Afghanistan, and thought of Herzl. I determined to find out if the situation of the Jews in Salzburg had changed. Surely there was a new synagogue in the city?

The directory listed 40 churches — 38 Catholic and two Protestant. Through searching for the Israelitische Kultusgemeinde, the Jewish community organization in Vienna that had enabled Eichmann in 1938 to find the names and addresses of all the Jews in the city so as to rid it of them, I found an organization with the same name in Salzburg. I called. Could I come over for a talk?

The answer was yes. As I walked there, I came across two of the so-called “stolpersteine,” the small brass memorials — literally “stumbling stones” — set in the sidewalk in front of buildings that had housed Jews who perished in the Holocaust. Another one was right in front of 8 Lasser Strasse, the location of the current Salzburg synagogue, this one surrounded by a locked gate. 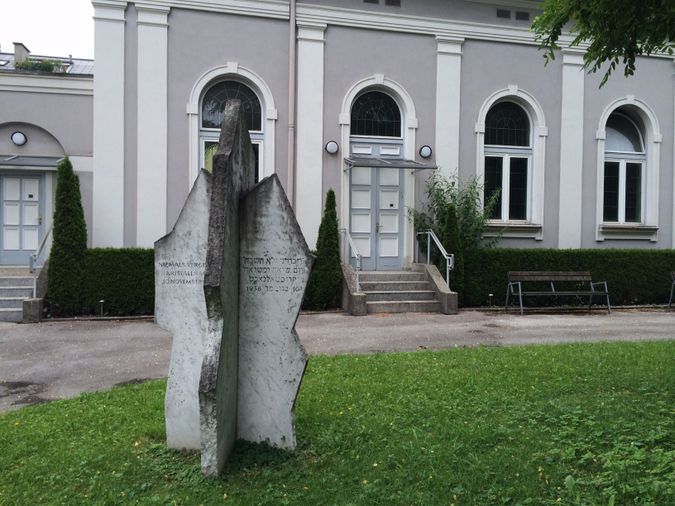 The synagogue is non-denominational but observes Orthodox practices “so that everyone at every level will feel welcome,” says Hanna Feingold. A sculpture memorializing Kristallnacht was erected by the congregation in 1985 but stands behind locked gates. Image by Courtesy Linda Burghardt

“For safety,” said Marko Feingold, a Holocaust survivor, who, with his wife Hanna, oversees the synagogue and organizes services for the Jews in town. And how many Jews were there in Salzburg?

Like all other religions organizations in Austria, the Jewish community receives financial support from the government. The synagogue was constructed in 1901, the first one to be built in the five hundred years since the last one was destroyed. When services are held on Saturday mornings, the group is not always large enough to compose a minyan. 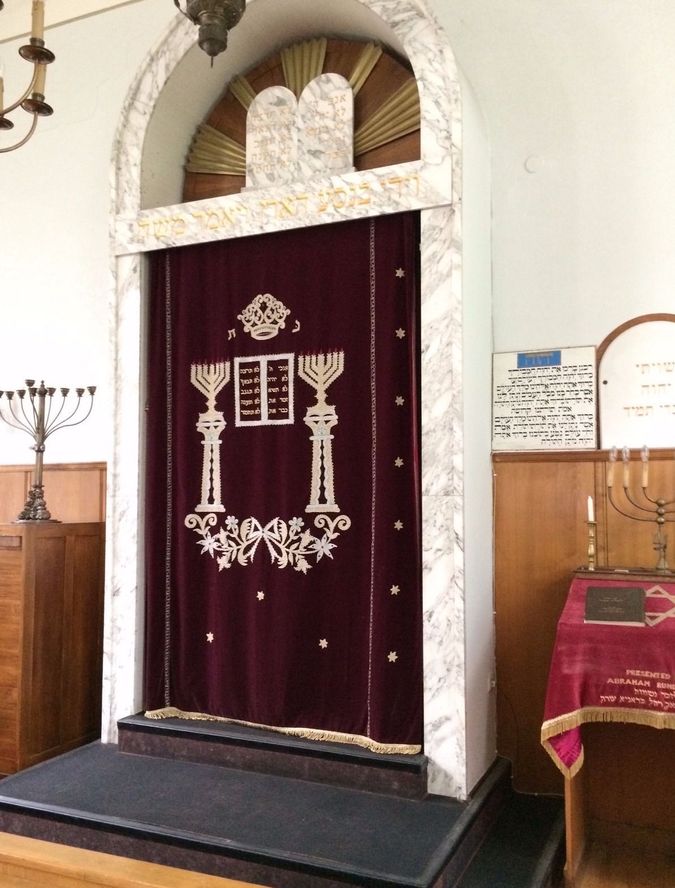 The ark at the synagogue holds four Torahs, two from the cache of Jewish artifacts stolen by the Nazis from temples across Europe. Image by Courtesy Linda Burghardt

Four torahs sit behind an embroidered purple velvet curtain, two of them from the warehouse in Prague in which the Nazis stored the Jewish artifacts they had appropriated from temples throughout Europe and which they planned to mount after the war in an exhibit of an “extinct race.”

Hanna Feingold gave me the address of the Jewish cemetery on the edge of town, which also has a locked gate. She told me that recently the plaques dedicated to the Resistance fighters were painted over and that Hitler’s name had been written on them. That the stolpersteine, including the one in front of the temple, which memorializes the synagogue’s first rabbi, Adolf Altman, were covered in black paint. And that the Jewish stars on the gates to the temple had been spray-painted yellow.

I had planned to ask about anti-Semitism in Salzburg, but the subject had come up on its own.

On the third and final day of the conference, the sessions on reconstructing childhood after genocide, war propaganda directed at youth, and zones of violence in Ireland today spoke even more loudly to me than the ones I’d heard the day before, when I had known so little about the local Jewish community.

In convincing myself to come to Salzburg, I had told myself that the past was over and the present offered a new day. But the talks and the seminars, all so enlightening, also saddened me deeply. What had changed? At the same time that violence was bursting forth from new places, had the old places dealt with the past? Had they healed? I determined to search for Holocaust memorials in this highly traveled tourist town. Other European cities prided themselves on them. Wouldn’t Salzburg be among them? Surely the city was so much more than Mozart and mountains, Sacher torte and Sound of Music tours.

But my search kept coming up empty. Then, near the enchanting Mirabell Gardens, I stumbled on an undesignated memorial “to those who had been euthanized between 1941 and 1945.” The Holocaust was not mentioned. The memorial had shown up in neither guidebooks nor on the city map.

The only other monument, equally lacking in signage or publicity, is on Südtiroler Platz, behind the Hauptbahnhof, the train station. It is an awkward three-legged concrete structure dedicated to all Nazi victims. Writing etched into the ceiling states that the city “acknowledges and regrets that National Socialist crimes were committed here and that citizens of this city were among those guilty of these crimes…Honoring the victims of yesterday means actively opposing all forms of fascism and struggling to protect human rights today.”

At the end of the day, the conference closed with the singing of “Edelweiss,” the well-known paean to Austrian patriotism that signaled a real goodbye and a subliminal one too. With the final refrain, “Bless my homeland forever,” laptops closed gently and hands here and there dabbed at eyes, and I thought of the red and white china teapot my parents had kept untouched, wrapped in plastic in the uppermost kitchen cupboard, for all their years in the U.S., and realized for the first time that it was made in the colors of Austria. They had given up the country that had rejected them but had not thrown it away.

Now I could see with some clarity what had connected me so strongly to both the children caught in the net of war and the one hundred brave souls that keep Judaism alive in Salzburg today. It was the great gift of resilience, the life-giving force that sometimes grows out of devastating destruction. I couldn’t help thinking that perhaps with the heart, soul and history that had come clear to me in these three days I might be fortunate enough to find some tiny seeds of it within my own deep legacy of loss.

Linda F. Burghardt, Ph.D., serves as Scholar-in-Residence at the Holocaust Memorial & Tolerance Center in New York. She writes frequently on topics of Jewish interest and has lectured widely both regionally and internationally.

The Last Jews of Salzburg