Senator Boxer: America Under Trump would be Midnight in Gotham City 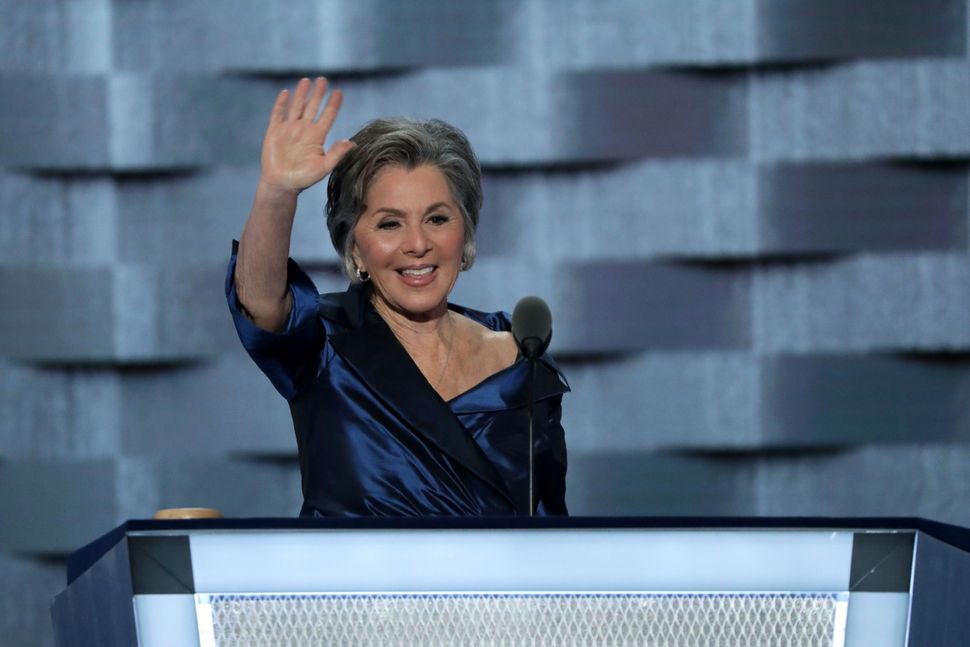 Boxer, a Brooklyn native who has served in the U.S. Congress since 1982, expressed bewilderment that any members of the Jewish faith could be voting for Trump, in light of some of the offensive things he has said. “We have a job, to reach out,” she said.

“In every election, there are voters who say, ‘well, this one isn’t perfect,’” Boxer continued. “Well, nobody’s perfect. As I always tell my constituency back home, the only perfect candidate for president would be you, for yourself,” she added, to applause from the now-packed room.

“We have all lived different lives, and we have all made mistakes,” she said. “And I am really excited about this Jewish outreach, and I hope I am able to help.”

Boxer stressed that it was an incredible moment in history. “And it is a moment we need to think about, and that we are part of.”

But she explained that we simply haven’t had time to focus. “We’ve been so busy fending off attacks — like yesterday, Trump inviting Russia to hack the Democratic President’s emails,” she charged. “One former Bush administrator, with security clearance, said he felt it was an act of treason,” she reported.

But lest anyone lose sight of what had been accomplished, Boxer conveyed, above all, that women, and also men, made tremendous history when they nominated the first female presidential candidate. “I want to thank the men who are supporting Hillary,” she said. “I’d like the women to applaud these men. It takes a man of confidence to support a strong woman. We women know this.”

Jewish people can be especially proud, Boxer explained. “When you hear the words tikkun olam, about the healing and repairing of the world, what do you think about this woman, who did it before the cameras were on?” she asked, before taking a moment to acknowledge the presence of her husband, Stewart, and asking him to stand up. “It’s been 54 years of marriage,” she kvelled.

“This is our country that we are seeking to heal and repair, and I want to thank Bernie Sanders for his influence in tikkun olam,” she said, “especially when he said we should all have employment and a living wage.”

Boxer said that by contrast, the Republican nominee, Donald Trump, said that wages were too high, and the minimum wage was good where it was.

“He needs to come down from the Trump Tower,” she said. “The air must be thin up there,” she speculated, “if he thinks the minimum wage is high, when the reality is that you can work full-time in America, and still be in poverty.”

And possibly without health care too. “He wants to do away with the Affordable Care Act as well,” said Boxer. “What’s he going to do, tell 20 million people they are out on the street with no health insurance?”

Boxer told the gathering, “That’s why we are Democrats.”

She asked how many in the room were first-generation, and second-generation immigrants. “Our story is the story of immigration,” she said, “not that we wanted it to be. We had to run away; we had to leave.”

Boxer told attendees that her husband’s Romanian great-grandparents were slaughtered by the Nazis. “They were so old, what could they do?” she asked, sadly noting that now, so many other people are forced to leave their homelands. “This community knows we need comprehensive immigration reform that’s fair and just and has a path to citizenship,” she said. “That’s the Obama Administration policy, and that’s what we do.”

Boxer again thanked Sanders for putting student loan debt on the front burner, saying that it could leave the entire country in debt.

Israel is another issue Boxer raised in her criticism of Trump. “Donald Trump says he is a true friend of Israel,” she said. “But he used the sacred Jewish Star in an offensive image of money.” Boxer noted that although he denied it was a Jewish star, it was lifted from a white supremacist website. “David Duke is an expert on Jewish stars, and he said oh, I know it is!”

In fact, she said, Trump so inspired David Duke that he is now running for Congress. “He thanked Donald Trump,” she said.

“I think Donald Trump is the most pessimistic and narcissistic leader I have ever seen,” Boxer declared. “If it was Morning in America under Ronald Reagan, then under Donald Trump, it is Midnight in Gotham City!”

If Trump says he loves women, Boxer questioned why he opposes pay for equal work. She said he has shipped jobs overseas, and has stepped on hundreds of dishwashers, carpenters, painters and small businesses. “He sent many of his own businesses into bankruptcy,” she said.

“Donald Trump is still trying to see President Obama’s birth certificate, but he won’t even release a year of his tax returns,” Boxer said, concluding her remarks. “He’s dangerous. He would take us back to the darkest moments of human history, and we can’t let it happen.” She quoted Rabbi Abraham Joshua Heschel, who said we should strive to live by justice and passion.

“I love our people because that’s what being a human being is all about – doing the right thing for other people. Hillary Clinton has dedicated her life to upholding those ideals,” Boxer said.

“Hillary Clinton knows that women stand together, pull together, and work together, and that our diversity makes us a better country, a more unique country, and a special place,” she said. “That’s why your help is so important. You have a portfolio of issues that you can take with you. You know about the wonderful things that she has done, and the miserable record that he has.

“You pick and choose, but I’ll tell you what,” Boxer said. “This is a close race — this is a tight race.”

Boxer cautioned that people may ask if Hillary is authentic. “Hillary is a Midwesterner,” she explained. “She keeps it inside; that’s her authenticity. She’s a workhorse. She just wants to make life better for people, and don’t let anybody say otherwise.”

Clinton, Boxer explained, is not a braggart. “She doesn’t walk around saying, ‘I did this, and I did that.’”

Boxer concluded by asking attendees to make phone calls and to donate $5, $500, or $5000 or whatever they can, and to tell every friend and every neighbor. “Tell them, that’s why I am with her,” she said.

“With your help, and the help of our friends in January,” said Boxer, “We will be able to say, ‘Congratulations, Madame President!’”

The Forward spoke with Boxer outside the Roundtable. “This election is so important to the Jewish community, because they know what it means to repair the world,” she said. “And we know the choice is so obvious, that Hillary Clinton has given her whole life to making life better for healing people and children and families.”

Boxer said that she has read The Forward. “For the Jewish community, and the values we uphold, this election should be so clear,” she said. “Because you have one candidate who has devoted herself to making the world a better place, to improving the lives of our families, to making our lives more secure, versus the candidate who has only cared about himself, and has hurt middle-class people.”

That evening at the Wells Fargo Center on the main stage among “the Democratic women of the Senate,” Boxer recalled how Clinton consoled a grieving population after 9/11. “And she also demanded answers from the Bush Administration,” she said. “I saw her do it — she was thrust into it, and she never stopped working, and she never stopped fighting.”

Members on both sides of the aisle, Boxer pointed out, praised her for her dignity, her resolve, and her effectiveness. “That’s Hillary. We can always count on her,” Boxer said, quoting senior team leader Sen. Barbara Mikulski. “She likes to say this election is not about gender, it’s about every single American. And we, the Democratic women of the Senate, stand shoulder-to-shoulder with Hillary, ready to make sure that she becomes the next president of the United States of America.”

Senator Boxer: America Under Trump would be Midnight in Gotham City