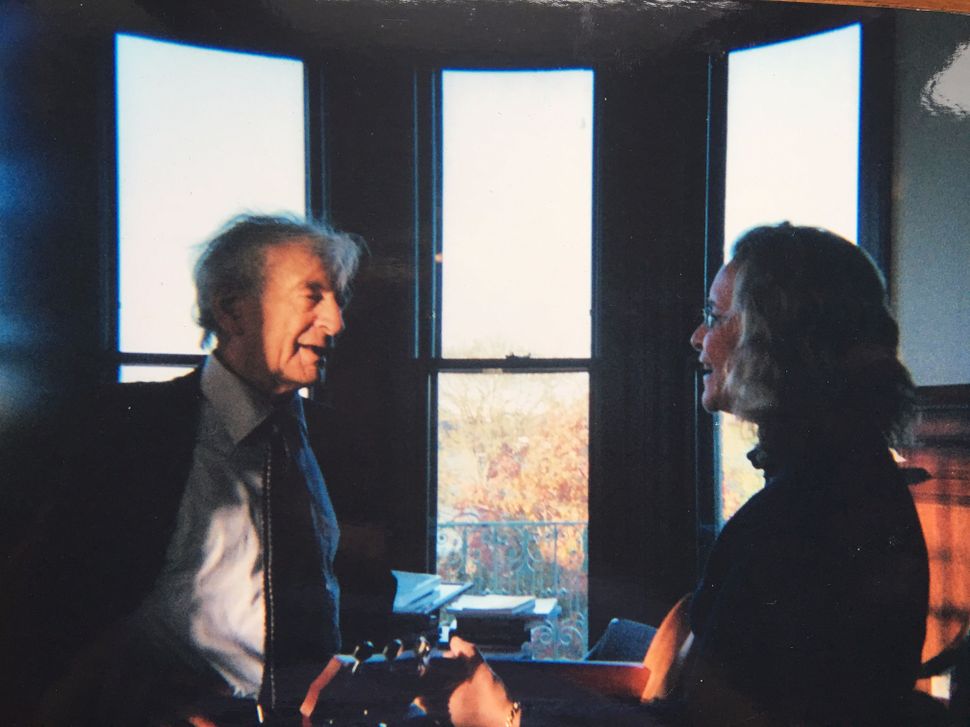 In l976 I entered a classroom full of hopes and dreams, hoping to study with Prof. Elie Wiesel at Boston University and dreaming of singing a Yiddish song for him, and even better, with him. Who knew that this classroom would lead to a lifetime of meaningful study, song and the cantorate?

When the classroom was overflowing with eager students, Professor Wiesel had to somehow choose who would be in his class, a task he was reluctant to do. He asked us to write on a note card the reasons why we wanted to take his class. I remember writing something about being from a family of cantors, wanting to share my love of Jewish music and Judaism, learn more about the Holocaust and my family’s history, and share this with Jewish children someday. (In l976 being a traditional woman cantor wasn’t an option.) His response to me changed my life, “ My door will always be open to you.”

I took every class he gave, and followed him to lectures and occasional classrooms over the next 36 years. I was an Elie Wiesel groupie and remain so with his passing. A few times I was fortunate to drive Elie Wiesel home from a lecture when the limo driver was busy arguing about a fare, or the fog was too heavy for the plane to take off. These opportunities to be in a car and sing together are wonderful memories- Hassidic songs, niggunim, poured out of him and we shared beloved Shabbat melodies back and forth. The musical side of Elie Wiesel is another precious layer to cherish.

A 70th birthday symposium was held at BU in 1998 and I had the honor or attending and leading a private sing-along in his office after the three-day symposium. A few loyal students including my friends, Cantor Riki Lipitz , Ariel Burger, Prof. Alan Rosen, and Rabbi Nehemia Polen, were invited by dear personal assistant to Wiesel, Martha Hauptman to gather afterwards in his office. Speakers, writers, teachers, students gathered on the floor of his office and started singing. Prof. Wiesel soon came in from his study and sat with us and started singing- the music flowed and it was pure joy- No one wanted it to end. The spirit and love in the room was infectious- we all felt we were part of a truly holy moment we would never forget. Rabbi Nehemia Polen had a few remarks retained in the recording “ He’s outside the door (The Baal Shem Tov)”, “ BU will never be the same”, “ you could wipe the floor with that song (so full of tears)”.

Rabbi Polen described Hassidic music brilliantly in a lecture given in a class with Prof. Wiesel- this describes the music Elie shared with us perfectly-

“ When I hear Hassidic music today I hear the amplification, dynamism, a pride of survival, and a pride in rebuilding. However something very precious is lost when you hear the pre-war Hassidic music- One hears nobility, sublimity, gentle, quiet, understated grace.”

That afternoon we all experienced the nobility, grace, beauty and true neshamah of Jewish music shared by Elie Wiesel. The rare recording of this sing-along is one I hope to share widely one day. His voice and his songs must never be forgotten. Ten years later in 2008, I was honored to present the recording to Prof. Wiesel at his 80th symposium at a private dinner. I will never forget him conducting me singing Rojinkes Mit Mandlen, and answering the songs with another haunting Viznitzer song, “Tzave”, also from the recording. We sang together as grateful students, international celebrities, authors, rabbis from USA, Europe, and Jerusalem, Hassidic, Liberal, Zionist, all singing with our teacher and mentor as one.

The lessons learned in his classroom enriched my life in ways I could not have scripted. I was inspired to follow in my family’s cantorial tradition after studying with Elie Wiesel and realizing the miracle of Jewish survival must continue with each of us.

With the encouragement of Rabbi Joe Polak at BU Hillel, I led High Holyday services in l976, a first for Boston, making the cover of the Boston Globe. Apparently in l976 no woman cantor had led a traditional service- surely my studies with both Rabbi Polak and understanding the miracle of Jewish survival with Elie Wiesel influenced me to continue my family tradition.

Why should I continue in the coffee houses singing Joni Mitchell, Bonnie Raitt and James Taylor like many others, when I could sing my grandfather’s music and continue a musical tradition where 70 family members lost in the Holocaust could not? I found out my grandfather had two cantorial brothers and three musical sisters- 22 cantors and singers in a family tree, most of them murdered in the Shoah.

Elie Wiesel gave me a direction and purpose I could not realize on my own. His description of holding a prayer book could bring tears to your eyes. I never understood the privilege of holding a prayer book- the awesome joy and life giving force of prayer that only a survivor can understand. Prof. Wiesel taught us that to be Jewish was not only a miracle but a holy responsibility to remember and continue. “ Light Shabbat candles not only for yourself, but for one who is no more” Imagine not taking life for granted, not taking Jewish holydays for granted? This message changed my life and continues to inspire me. Prof. Wiesel never wanted to waste time, knowing how precious life is.

While Prof. Wiesel has passed into another holy realm, his lessons and songs remain with us as sparks of divine inspiration- a “…nobility, sublimity, a gentle, quiet, understated grace” May his words and songs inspire all of us as we remember him.

Cantor Deborah Katchko-Gray is a fourth generation cantor and the second woman to serve a conservative synagogue. Since 1999, her spiritual home has been Congregation Shir Shalom of Westchester and Fairfield Counties, a Reform congregation in Ridgefield, CT.