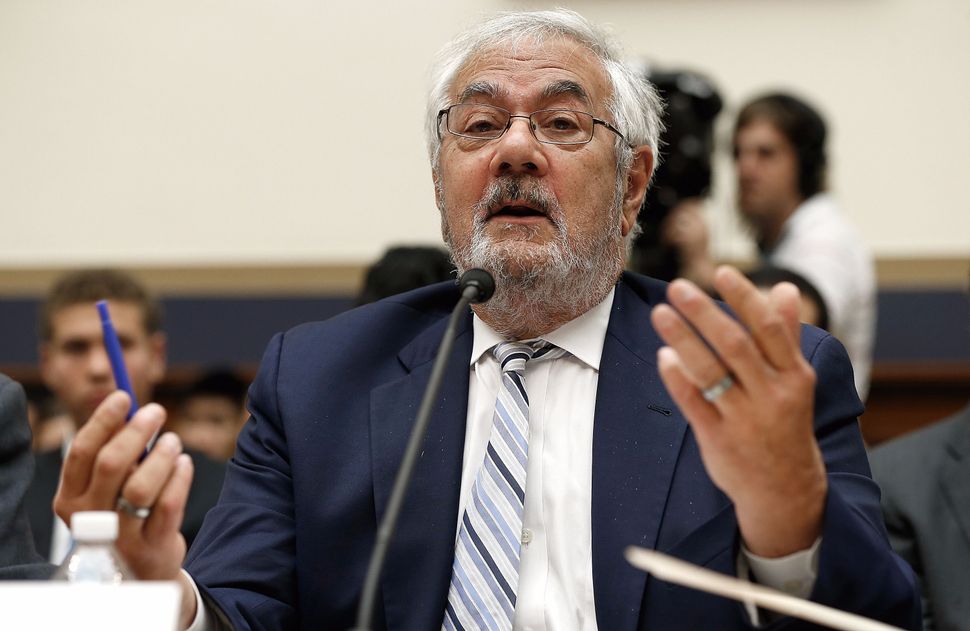 “I’m glad to be here,” said master pontificator and former legendary congressman Barney Frank, at the DNC Jewish Roundtable in the Philadelphia Convention Center on July 28th. “I would even be gladder if this was in the same place as the Convention,” he grudgingly continued. “The idea of having two Convention halls several miles apart is farkacht!”

“We in the Jewish community have been the beneficiary of support from a wide range of groups who have come to our defense against bigotry and anti-Semitism, and one of the great threats is this recurring notion that we are a Christian nation, and we should accept this imposition gracefully,” he said.

“I was once chairing the all-night session of the House of Representatives in my junior years, and a Republican representative was talking about the need for a school prayer amendment. He said, “We are, after all, a Christian nation.”

Frank paused. “I asked him, ‘If this is a Christian nation, why did you drag this Jew out of bed to get here to listen to all of you?’” The crowd roared at another inimitable Frankicism.

“The fact is,” Frank continued, “the defense of America as a nation with no official ideology with respect for all traditions has been very important to us. And — it is one that is now endangered,” he added.

“We are often those who are most negatively hurt by it,” Frank warned the assembled, alluding to a certain sentiment that formed after World War II, and, before that, “a series of things that happened in the 30s, when America was officially anti-Semitic, and pro-Christian — even skeptical of Catholics.”

Frank also reminded the audience about the horror that Jews felt in America and through the rest of the world about Hitler, and what happens when one is driven to extremes. “But there has been a reversal with regard to race,” he offered. “And there has been a recognition of sexual equality and identity, and the legality of same-sex marriage, even within the Republican platform.”

Nonetheless, we all need to be on guard. “Once there is a cartoon that affects any of us, we are endangered,” he said.

At an impromptu press conference outside in the hall, Frank was asked why Israel was not mentioned more at the DNC. “Was any other country mentioned more than Israel?” he responded. “No. There is not a big difference regarding Israel,” he said. He added that we have every right to criticize Israel if we wish to, as he had stated in his remarks at the Roundtable (“I do ask people to tell us if there is any other government on the face of the Earth, and in history, that we don’t criticize,” he said there).

Reporters asked Frank about allusions to Bernie Sanders’ religion in the leaked DNC mails. “I think that people were most angry at those,” he said.

When asked for an exclusive comment for the Forward, Frank ended the conference in trademark fashion. “Exclusive means that you’re going to say something that isn’t true?” he asked. “If you were going to say it, why shouldn’t you say it to everyone?” he finished, before scurrying away for the lengthy, farkacht journey back to the Wells Fargo.