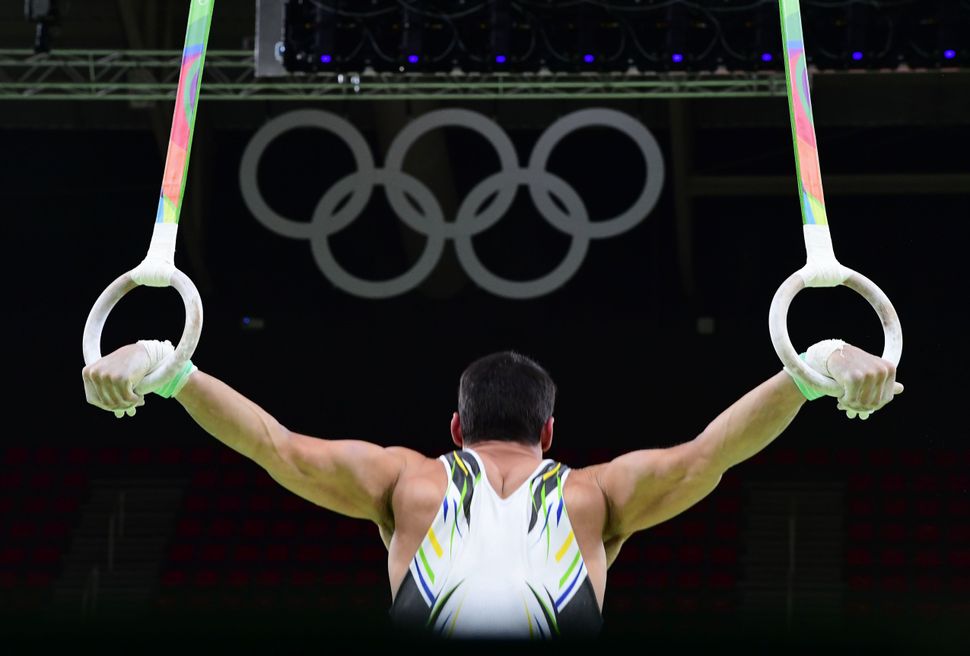 A Brazilian gymnast practices on the rings of the men’s Artistic gymnastics during a practice session at the Olympic Arena on August 3, 2016 ahead of the Rio 2016 Olympic Games in Rio de Janeiro. Image by Getty Images

Here’s something dictatorships, economics and the Olympics all have in common: each projects the notion that strength, agility, and efficiency define human worth.

There’s a corollary to that shared vision, too. In each of these systems, the less strong are automatically second class. After Gold, there’s just Silver, Bronze, spectator, and pariah. There’s nowhere to go but down.

No wonder so many would-be host countries are either despots looking to make their name on the world stage, or respectable countries looking to get rich from a major sporting event (albeit with uncertain results). Sport, dictatorship, and money all work from the same logic. The Olympics gives that logic a shared playing field.

Judaism has a better way. That way is Shabbat.

Deuteronomy describes Shabbat as the day when you, and your son, and your daughter, and your man- servant, and your woman-servant, and your ox, and your donkey, and all your animals, and the foreigner who is in your midst all rest together. The separate, often conflicted strata of society—of master and slave, of man and woman, of citizen and foreigner—join together weekly in the name of rest. It’s not unlike all countries unifying, if only briefly, around sport.

The Sabbatical and Jubilee years—whole years based on the framework of Shabbat—take the idea a step further. In the Sabbatical year, Biblically, land goes fallow and debts are released. In the Jubilee, the culmination of seven Sabbatical cycles, slaves go free. These Shabbatot don’t celebrate a hierarchy of winners and second-best. They celebrate each member of the community—master, servant, debtor, animal, and land—as a protected and valued equal.

To be sure, the ideal these Shabbatot convey isn’t always feasible. Hillel the Elder, the great sage of the first century BCE, created legal fictions that essentially undid Sabbatical debt forgiveness, on account of rich creditors’ withholding loans to the poor over fear of losing money.

Nor is Shabbat the world we live in on the day-to-day. Six days a week, and six years a cycle, we still work—approaching people, animals, and the environment as units of production. For society to function, strength and efficiency need take center stage most of the time.

In other words, Shabbat is about as far from the Olympics as you can get. Which is why, to my mind, it’s much better. At the end of his life, Moses commands that, as each Sabbatical year comes to a close, the entire nation—men, women, and children—should unite for a massive religious gathering. Every four years today, the global community watches from the sidelines as a handful of athletes struggle for glory. Both are models of an idealized world. But which world do we want to idealize?

Abe Mezrich is the author of The House at the Center of the World, a book of meditations on sacred space in Judaism.