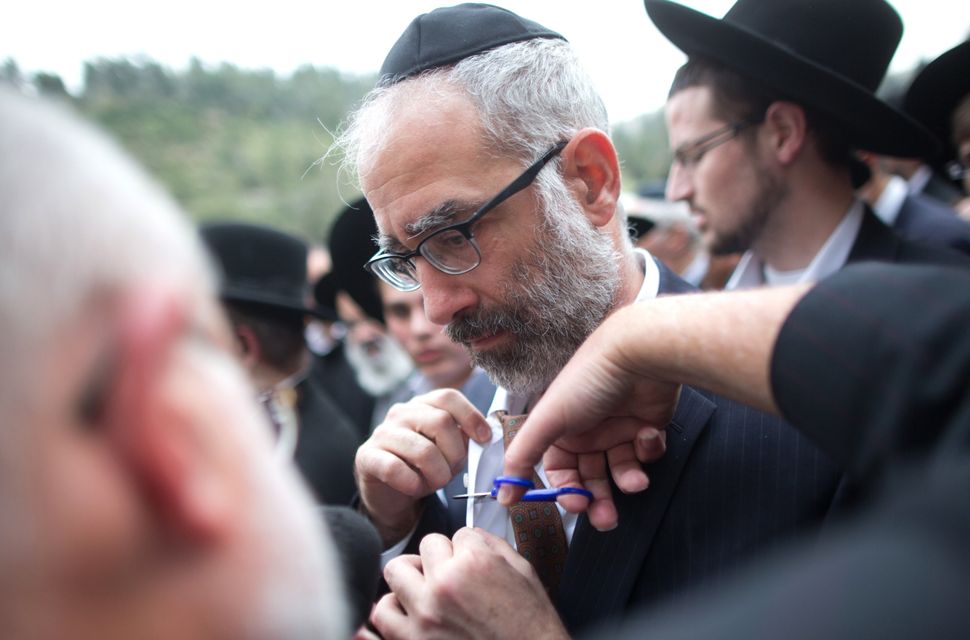 Ultra-orthodox US Jewish father Gabriel Sassoon has his shirt cut as a symbol of mourning during the funeral of seven of his children at the Givat Shaul cemetery in Jerusalem on March 23, 2015. Image by Getty Images 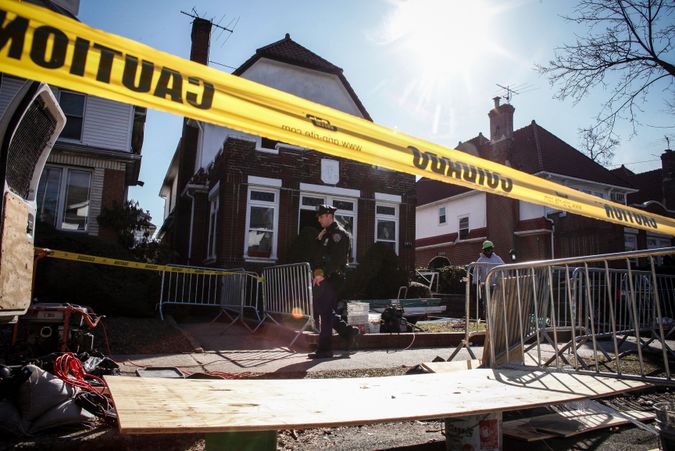 One Friday night, while I was pregnant with my baby girl, there was a horrendous fire in the Midwood section of Brooklyn where I live with my partner, Adrian. That night, Adrian and I were driving home late and could see the ambulances flashing lights from a mile away. As we drove closer, we realized the fire was blazing only two blocks away from our own home. We parked the car and saw people running toward the flames. We too decided to see what all of the commotion was about.

Midwood is an Orthodox section of Brooklyn. It is where I grew up and where I learned Hebrew and Chumash (the Torah). Midwood is where I mourned for my father and where I sat on the sidewalk and cried to Hashem, my G-d. Midwood is the neighborhood where I lost faith and then found faith again through a dual faith relationship (Adrian is a Mexican Catholic and I am an Ashkenazi Jew). The night of that fire, my faith would be tested yet again. 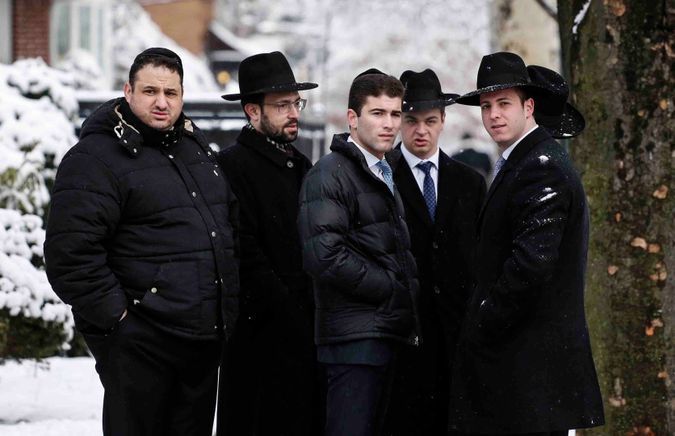 As Adrian and I walked closer to the blaze, we saw almost the whole neighborhood standing outside in tears. There was a sea of Yarmulkes and a river of long skirts. Women in wigs looked on in disbelief. Young teenagers wearing traditional Jewish garb held hands and wiped each other’s tears. Adrian and I stood frozen among them. We did not fit into the crowd. No one seemed to notice or care. As we walked to the middle of the block, we could see a house on fire that firefighters were struggling to put out. Adrian, in a panic, told me to walk home at a fast pace with him. In his small village in Mexico, it was seen as bad luck for a pregnant woman to see a dead body, and he wasn’t sure if anyone had been hurt or killed in the fire.

I turned to a boy about twelve years old. “Was anyone in the house?” I asked him. He nodded yes. “Was anyone hurt?” I asked again. He turned away in tears. That night, we went home to sleep. But as soon as I woke in the morning, I checked the internet for news on the fire.

“7 Children Killed in Midwood, Brooklyn House Fire” read one news title. I froze. Seven children. Seven. As it turned out, the family had left a hot plate on for the Sabbath and there had been an electrical fire. The flames started in the kitchen and as soon as they reached the staircase, they were unstoppable. All of the children died from the smoke and then were burned in the fire— all except for the oldest daughter and the mother, who jumped out of the front window to run for help. The father, Gabriel Sassoon, had been in Manhattan at a spiritual retreat and no one could reach him to tell him the news because it was still Shabbat. 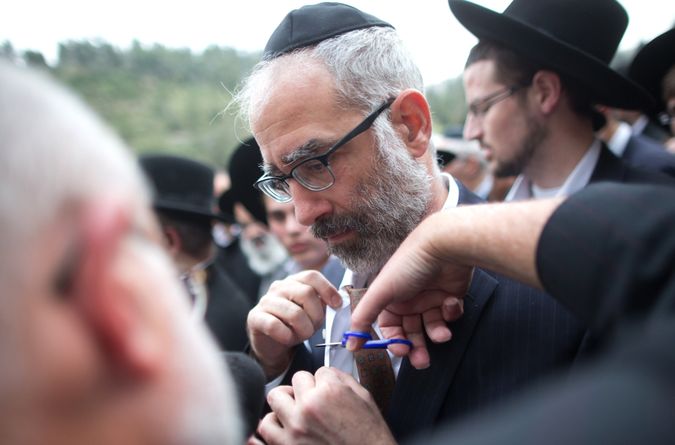 Ultra-orthodox US Jewish father Gabriel Sassoon has his shirt cut as a symbol of mourning during the funeral of seven of his children at the Givat Shaul cemetery in Jerusalem on March 23, 2015. Image by Getty Images

Mr. Sassoon was asked what he was feeling toward G-d, to which he responded that it was “G-d’s will.” According to the New York Daily News in his eulogy for his seven children he said, “I have sacrificed everything. Here, in front of you, seven pure sacrificial lambs.”

I sat in my kitchen, pregnant, reciting the Mourner’s Kaddish. The Jewish prayer for mourning a loved one comes easily to me. I have been reciting the Kaddish since I was twelve and a half years old. “Oh Glorified and Sanctified,” it begins. Usually Kaddish is only to be recited for a parent or child. But seven children had perished. This was significant to me for many reasons.

I grew up Jewish but I did not marry Jewish. In fact, I did not marry. Adrian and I decided not to marry and to live our lives as two committed adults and raise a family through our own vision of love, religion and respect. I am an avid believer in the Torah and Adrian is an avid believer in the Virgin of Guadalupe. We can both respect each other’s different beliefs. While pregnant, I prayed to my G-d and he prayed to his. As the fire in Midwood swept up the stairs of an old Brooklyn home almost identical to the one I grew up in with my own parents, Adrian asked Jesus to have mercy on Mr. Sassoon, and I asked Hashem the forbidden Jewish question: “Why?”

In Judaism, we are not permitted to ask why. Hashem always has a reason. But, this seemed too much to bear. I followed the news like an obsessed stalker. In the Borough Park section of Brooklyn the next day, almost three thousand people showed up to mourn the lives of the seven children. As the bodies of the “lambs” were shipped to Jerusalem, seven fresh graves were dug next to each other. I watched Mr. Sassoon’s face on the television screen sink into his grief like a stone landing with a thud at the bottom of a vast ocean. 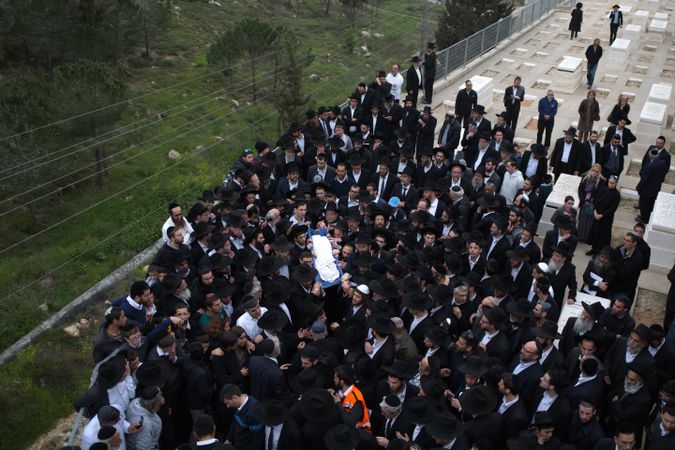 Ultra-orthodox Jewish mourners carry the body of one of the seven US children from the Sassoon family at the beginning of their funeral. Image by Getty Images

The number seven has deep historical significance for the Jews. Perhaps this is what kept Mr. Sassoon tied so willingly to his faith even after G-d had slaughtered all but one of his children. After all, the first sentence in the Torah consists of seven words. Seven is holy. Seven is the Sabbath. Seven are the number of days we are asked to mourn for a loved one. Mr. Sassoon knew this just as I knew this when I read the newspaper and hovered around the block where the fire occurred. I had looked for G-d all my life. I had looked for the merciful G-d, the one who saved only Noah, the one who gave Hannah her seven sons.

But I asked G-d why. I continue to ask. I have a beautiful healthy baby girl. She is named after my two Grandmothers Helen and Rose. She takes the last name of her father, Castañeda. We raise Helen with Hebrew alphabet letters on the fridge, a statue of the Virgin of Guadalupe by her bed, and we speak to her in Spanish and English at home. Before bedtime each night, I sing the prayer for Israel to her, “Shemah Yisroel,” so that she will grow up believing in miracles.

Mr. Sassoon has decided to live. He believes that G-d has a plan for him. He believes in the Hebrew word “Bashert,” which means “Destiny” or “Fate”. He believes that if he can go on, then he is a symbol for others to go on and this is in G-d’s plan as well. I ask myself if I believe. Within my interfaith relationship, how much faith is needed to go on after such a tragedy as the one Mr. Sassoon faced and must face every day? Within my own Judaic beliefs, the ones I impress upon my daughter, if G-d took her away from me, would I be able to forgive? Would I look towards the Torah or turn my back to it? Would the words “G-d’s will” leave my lips? And if not, what kind of a Jew am I? And if so, what kind of a mother?