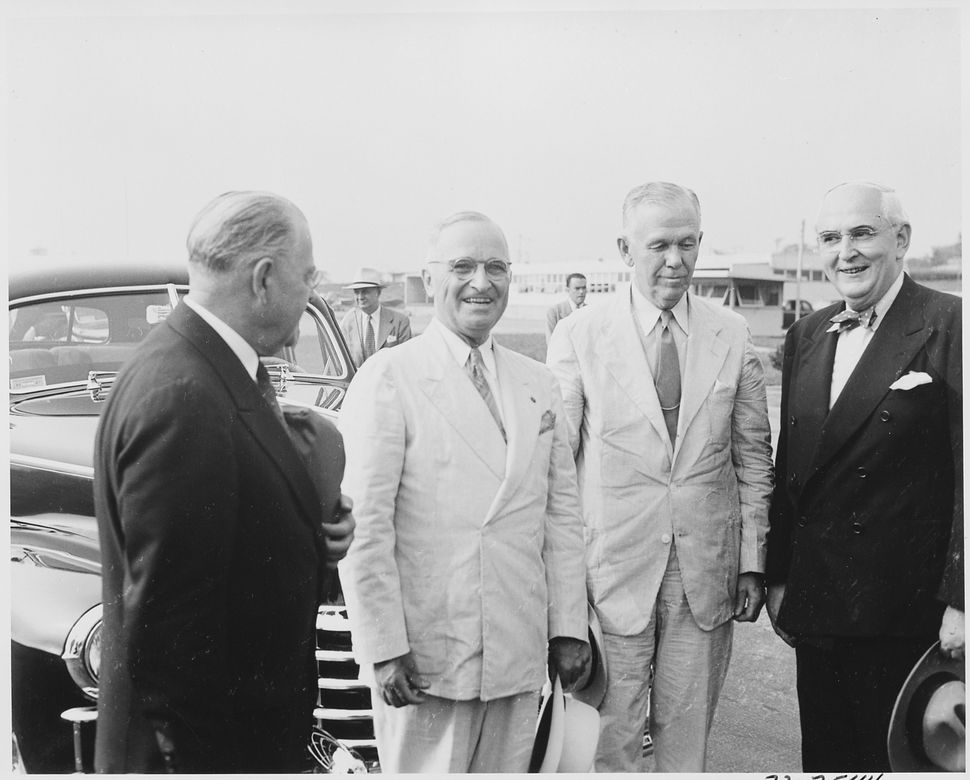 President Truman at National Airport in Washington, D. C. to see off Secretary of State George Marshall and two delegates who are leaving to attend the Rio de Janeiro Conference of Foreign Ministers in Brazil. L to R: Warren Austin, U. S. Representative to the United Nations, President Truman, Secretary Marshall, and Sen. Arthur Vandenberg. Image by wikimedia commons

It is hard to imagine, in today’s 24-7 news cycle made up of equal parts visual necessity plus a profound political divide that often reduces America’s two main political parties to cartoonish food fights, finding and creating common ground to shape an American foreign policy that would last for decades. Yet that is precisely what Harry Truman and Arthur Vandenberg accomplished in the nervous uncertain days as one world war gave possibility to the start of another one.

In his new book, Harry & Arthur (Truman, Vandenberg , and the Partnership That Created the Free World ), author Lawrence J. Haas wants to remind us of the possible — or at least, the once was. His book brings us back to a time before Iraq (wars one and two), before Afghanistan, before 9-11, before the fall of communism and before the American debacle in Vietnam. The last days of World War Two are being fought, however the American- English-Soviet alliance is slipping into mistrust and postwar fears as a spent democratic world looked to the United States to play the role that Great Britain once carried.

Having come off of a war which killed tens of millions, which created and codified the word genocide (the purposeful planned destruction of a people, in this case the Jews) and which was threatening to end with a destitute western Europe at the mercy of an expansionist Soviet Union, both the brand new president Truman a Democrat and the midwestern intellectual Republican Senator Vandenberg had to leave as much politics at the waters edge given that they both desperately needed each other.

For baby boomers, these should be reasonably familiar terms. For millennials, only the UN may have some traction as its creaky wheels of international plenums continues to call attention at least periodically to events of concern of the moment.

But in the days that crafted the ending of one monstrous dictator but gave rise to the very real possibility of Soviet domination of Italy, of France, of Greece of Turkey among other non communist states, the question of whether America would revert to its pre-war isolationism was a very real fear.

Britain had few resources. America would need to decide if it could afford to sit out events. The signature events that would shape the American world view was both the appeasement of Adolf Hitler plus the sneak attack by Japan on Pearl Harbor. That the war had ended with America an undeniable world superpower was attended to by our victorious armies occupying part of Germany and then all of Japan.

And so, Truman and Vandenberg began to build a partnership. Truman, carrying the ball as President, wishing to see an international forum come into place for the resolution of conflict (hopefully before it began) in the United Nations and Vandenberg concluding that the United States was no longer free to hide behind its two vast oceans that the nation must be proactively engaged in diplomacy and alliances with nations which shared similar values. Otherwise, who would the United States have to trade with? What would the point of winning the war be if the peace would soon freeze into unpleasant relations between two equally fearful blocs of countries with neither wanting to repeat the mistakes of unpreparedness as each saw it?

Vandenberg can be seen as a man given to great intellectual conceit but one whose capabilities often justified the self importance. Truman, ever mindful of being examined through the prism of FDR’s shadow, is far more reliant on existing figures of stature including the heroic Gen. Marshall and clearly needs Vandenberg to help deliver the then majority Republicans in the senate to an expansive vison of an American presence on the world stage that had never existed before.

All of these issues were not casual. Americans wanted peace after the war. Though rich by any standard, Americans did not want to be “suckers” and just throw dough at a problem. But the central premise that enabled the Truman – Vandenberg partnership had been impressed upon America’s lawmakers. You don’t get to write all the rules of engagement when you are a superpower and non-entanglement or other words for minding one’s own business simply had no place when there was no one else.