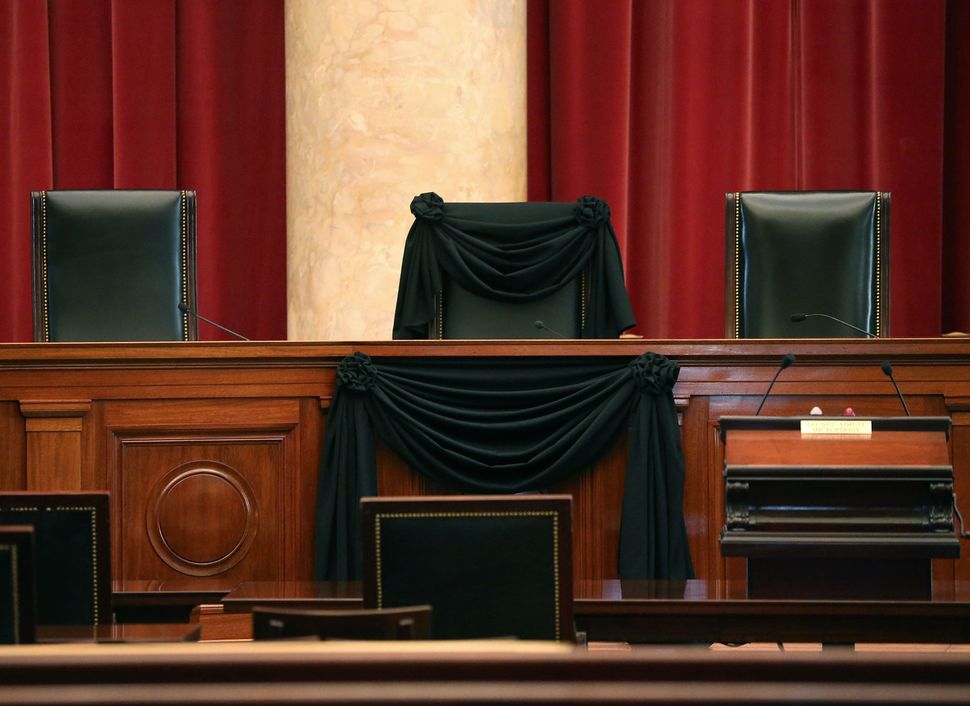 As Jews in the United States and worldwide usher in the New Year on October 3, 2016, the US Supreme Court will be starting its new year as well. The first Monday in October is the traditional start of the Supreme Court term. This year, in deference to Rosh Hashanah, the court will meet but will wait until the next day to start hearing case arguments.

With three Jewish justices, it’s not clear if they will be in court or elsewhere observing Rosh Hashanah as the court is gaveled into session on the first Monday in October 2016. What is clear is that there will be at least one empty chair that day and on the days that follow because the US Senate has yet to take even the first step in filling the vacancy that occurred with the death of Justice Antonin Scalia on February 13, 2016. Judge Merrick Garland was nominated on March 16 by President Obama to fill that vacancy, but blatantly partisan politics in the Senate have kept him waiting longer than any other Supreme Court nominee in history. There’s been no Senate Judiciary Committee hearing, no committee vote, no debate on the Senate floor or vote to allow senators to weigh in on this nominee.

How does the Senate’s failure to do its constitutionally mandated job impact the Supreme Court’s work? A look at the court’s docket for this term might provide part of the answer.

Perusing the list of cases taken so far — a smaller list than usual — it doesn’t appear as if the court needs to worry about rallies on its doorstep by opposing sides of a contentious constitutional rights issue. As it now stands, I doubt there will be any all-night lines of people camped out at the court in order to get access to the limited seating inside.

In many instances in the cases docketed thus far, the court has defined a narrow procedural question for its focus — partially due, as some suggest, to the current eight-member court. For example, take Buck v. Davis, a case scheduled early in the term. In this case, an expert witness played on race bias and was instrumental in convincing a Texas jury to hand down the death penalty instead of a life sentence. The Supreme Court is examining the standard of review subsequently used by the appeals court. Racial bias on the part of jurors also figures in Pena-Rodriguez v. Colorado.

NCJW will also be watching Trinity Lutheran Church of Columbia v. Pauley that looks at the issue of whether a church-sponsored preschool can participate in the state of Missouri’s grant program which pays for installation of rubber surfaces in playgrounds. Also of interest is Lynch v. Morales-Santana which examines, among other issues, whether differing treatment of unwed mothers and fathers in immigration law constitutes unconstitutional gender bias. NCJW will keep an eye on the two cases involving the Americans with Disability Act (ADA): Fry v. Napoleon Community Schools which looks at how the Individuals with Disabilities Education Act (IDEA) relates to the ADA and Ivy v. Morath, which concerns the ability of deaf people to get a driver’s license in Texas where the state assigns driver education to private companies.

The importance of these cases aside, the absence of blockbuster cases leads me to wonder: did the justices purposely avoid taking what could become landmark cases knowing that they were likely to be one justice down for the foreseeable future? Is the empty seat having an impact on the number of cases taken?

Last term the Supreme Court managed with eight justices — up to a point. Cases on immigration and public sector unions were decided 4-4, leaving lower court decisions standing and no precedent to govern other similar cases. In a case on contraceptive coverage in the Affordable Care Act, the court punted it back to the lower court.

Of course recently, in a move applauded by NCJW, a deadlocked 4-4 court effectively stopped North Carolina from implementing three provisions of its draconian election law prior to the November election.

Another recent action could possibly provide the blockbuster case that is currently missing on the docket so far. The case involves a Virginia transgender high school student who was barred by the school board from using the men’s lavatory at his school. A lower court found that the school board action was discriminatory but, the Supreme Court allowed the school board policy to prevail — at least for the time being. As of this writing the Supreme Court had not yet gathered to consider other cases for the term. At a scheduled meeting in late September and in the weeks and months ahead, more cases will be added to the docket. The absence of a ninth justice will continue to compromise the ability of the highest court to fully do its job. As the Jewish New Year dawns, NCJW will renew its commitment and actions to advocate for the Senate to do its job to fill that critical vacancy.