Two Months Ago, My Mother Committed Suicide. This is Why I’m Breaking the Silence. 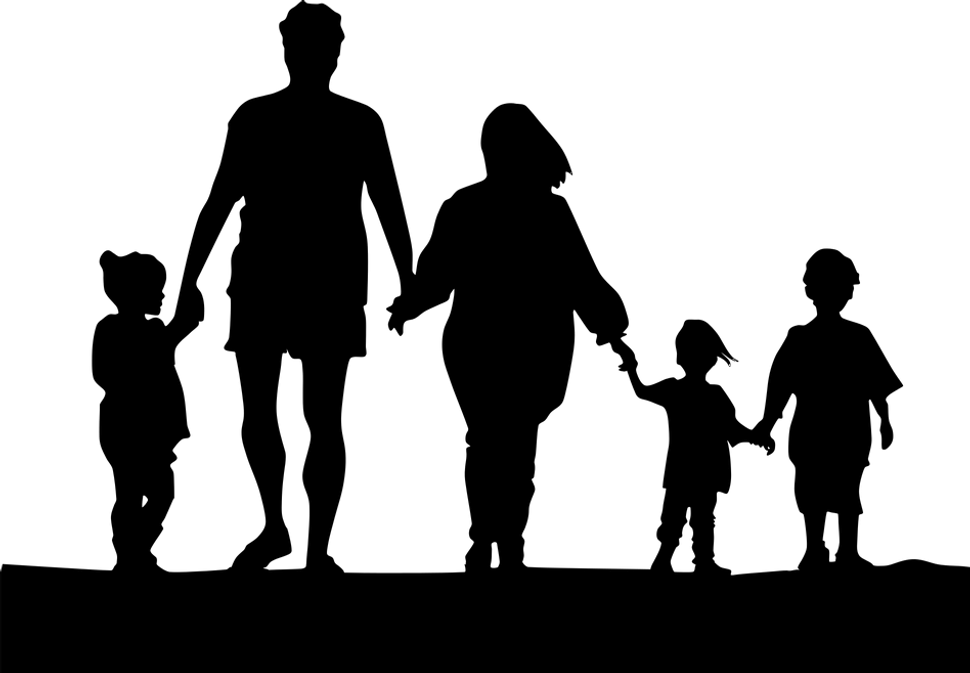 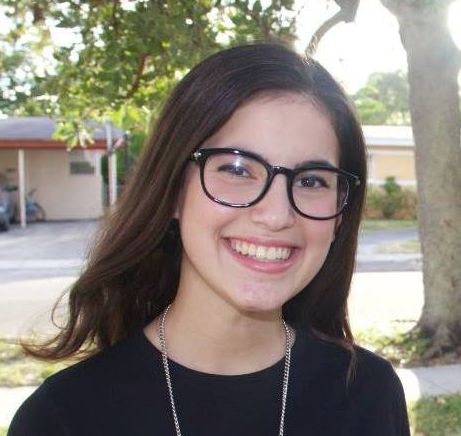 Two months ago, my mother committed suicide suddenly and shockingly.

Disclaimer: I have no background in psychology, so I can only share my personal experiences with suicide and mental health. I can only break the silence with my words.

Many people were totally taken aback when they found out that my family went totally public with the fact that my mother died by suicide. I realize that it is an utterly taboo subject, especially in the Orthodox Jewish community, and that most families that experience suicides that I know of have preferred not give a confirmation, at the very least. I TOTALLY respect their decision to do so- there are many reasons one may choose to keep silent- even though I choose differently.

The World Health Origination writes that “Over 800,000 people die due to suicide every year… [Suicide] was the second leading cause of death among 15-29 year olds globally in 2012.”

I, for one, am sick of the whispering when it comes to this topic. I am not embarrassed. I feel horrible and it shook my universe, but I am not embarrassed. So many people have feelings inside of them, and when we keep suicide and mental illness a secret, people who have not heard of it and feel it inside of them suffer from the silence. They think they are alone, though they are not. I decided to be part of the group of people that speaks about my experience and informs people, and I am not embarrassed to do so and hope that somehow someone can be helped by the experience that my family went through. It is time for us and for the world to start talking about problems that can be addressed. It is time for people to be comfortable seeking for help; not scared of how they will be perceived. I, for one, have had enough.

Although every suicide case has extreme disparities when it comes to whether it was expected or not, we did not see this coming. Not all people who suffer mental illnesses are transparent about it, even/especially to their loved ones. Suicide and mental illnesses can be hidden and shocking. Human beings commit suicide- human beings that can, in many cases, seem perfectly normal and perfectly happy. My family had undergone a series of struggles over the course of eight years: extreme financial burdens, multiple deaths in the family, etc. It wasn’t during those major lows that my mom killed herself. It was in our up. It was when we were just getting back on our feet. It was when we could finally breathe. That is when she killed herself.

When we talk about therapy, it is so important to understand that you do not need to feel suicidal to seek help. I am in therapy from this and will remain in therapy for a very long time, even though I do not (Baruch Hashem) have suicidal tendencies or thoughts. I do not feel depressed or lost of hope. I know I just went through something extremely traumatic and owe myself and my future respect- I owe it to myself to get professional help. I am not embarrassed. Years ago when my family was going through insane challenges, I wanted my mom to get some professional support. She argued that she felt fine, and for all I know she might have, but I insisted anyways. One doesn’t have to wait to feel horrible to seek help. When you need an antibiotic (say for strep throat), it would be horrible to wait to take it until all of the symptoms got so bad that you had no other choice- and the antibiotic might not even be strong enough at that point to treat you- you take that antibiotic right away! The same mindset should be applied to therapy. Get the help you deserve as soon as symptoms present themselves; even small ones. They can accumulate.

The song “Till it happens to you” by Lady Gaga reflects how I have sometimes felt these past two month in reaction to some comments made as well as just in general. I still felt loved and accepted and grateful for everyone who embraced me, but nevertheless this feeling arises. I like to take the song one step further and suggest that if we stop assuming that we know what another person feels and and try to truly empathize with those around us, we can be sensitive to their challenges and needs.

My mom decided spontaneously this past May that the family would be moving to Israel. The decision came with a lot of bad consequences for all of us. After she committed suicide, a very close (extended) family member commented on my Facebook post and said that my mother was not mentally ill, she was “just depressed” and moving to Israel would have solved everything. That is a very dangerous misconception. My mom could have moved across the world, her friends could have visited her, and we could have gone on a family vacation. The fact is, without the proper help, my mom would have still killed herself. This stigma that to be “just depressed” is acceptable or not important needs to end. Untreated depression is the NUMBER ONE cause of suicide. Furthermore, my mom was trying to change everything external- to move, to have different friends, to get a haircut. The internal, though, is what needed to change. The external is just a mask for the internal, but healing needs to come from the inside.

Questions: What could I have done? What can I do? The answer is the same in regards both to the suicide as well as to the mourners: sometimes everything in the world, and sometimes nothing at all. To all our family and friends, this could not have been your fault. Unfortunately, there is nothing you could have done in this particular case. So many people have come to me with guilt and with pain and with regret, but it is not your fault.

Like so many others, I felt totally guilty after my mom committing suicide- and yet, after a lot of therapy, I can say that I know it couldn’t have been my fault. Because nobody ever gave me a manual. Nobody ever gave over a class on the “red flags of suicide”. Nobody ever told me what it would sound like, what I would see and not see, and what I could do with that information. On the same token, obviously, it could not have been any of her friend’s fault, or anyone in our family’s fault; no matter what she told us or didn’t tell us. Sometimes this is how it is with mental illness: spread out in cryptic codes and made invisible; threaded into white lies and hidden in plain sight.

The question is, what CAN we be doing to help people be aware of their surroundings and to be aware of their own symptoms? What SHOULD we be doing? The picture below is one that my mom sent me this summer that she found while packing for the move that she was planning. I drew it when I was a child, and I could not understand why I was always so upset at things that were happening to us and she was so happy. 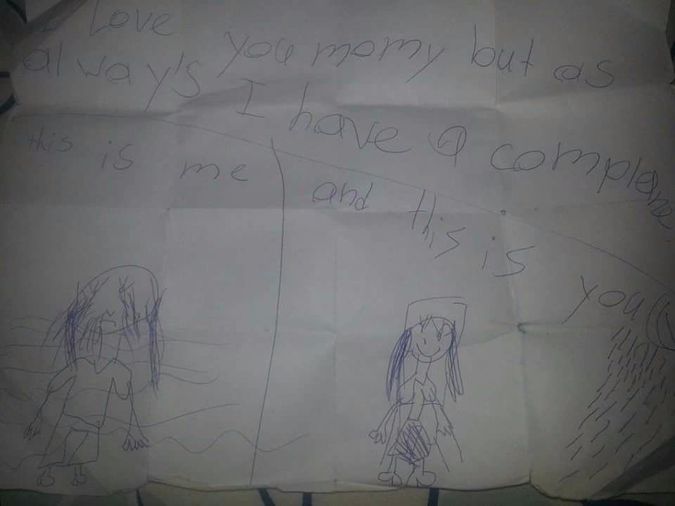 I remember even at our worst times, my mother presented a smile. She thought she was shielding us from sadness. While we try to protect and shield our children from struggles in life- especially ones like mental illness- are we helping them or hurting them? I think the line is very blurry.

A good friend of mine told me about feelings that she started having at EIGHT YEARS OLD. She would go to bed at night wishing that she would not wake up, not knowing what was wrong with her. Only as a young teenager did she even hear about depression. What messages are we, as a society, sending to our children? To suck it up and smile? That feeling like something is wrong is abnormal? Why are we not addressing mental health head on- speaking about it in schools and places of worship- educating our communities?

Why are people embarrassed to get the help that they deserve? Can it be because of our silence?

I am speaking out and breaking the silence with my story. I am encouraging others to seek help- I commend those who have. Through this journey, one lesson stands out amongst the rest:

It is not embarrassing to undergo a heeling process.

Let’s end this stigma together. Let’s bring heeling into this world. Let’s get the tools to help ourselves and others and demand a reform in our education and awareness of mental health as a society.

Let’s break the silence when it comes to mental illnesses and suicide.

Shanee Markovitz is a graduate of Katz Yeshiva High School in Florida and is studying in Midreshet Nishmat in Jerusalem for the year. She will be attending Stern College for Women in the fall of 2017.

Two Months Ago, My Mother Committed Suicide. This is Why I’m Breaking the Silence.