How Do I Explain My Trump Nazi Nightmare to My Mexican American Daughter? 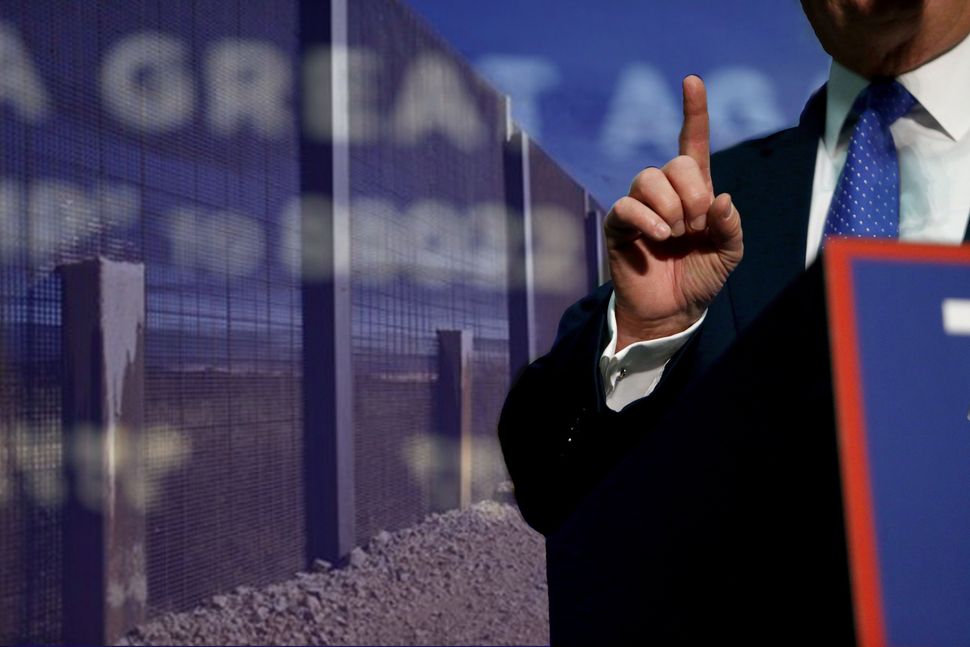 I have a terrible recurring dream. I’m hiding in the attic with Anne Frank and she’s calling me “Kitty.” I tell her that I have to go, I don’t know where my daughter is, and she turns to me and tells me that we can’t go anywhere. We are in hiding and we must stay this way until the war is over. All of a sudden, I hear boots on the stairs and the door swings open and it’s Donald J. Trump — only he’s naked, wearing a swastika sweatband on his head, and he says, “I think Islam hates us.”

I wake up sweating. I had this same dream for three consecutive nights in a row — only every night when Trump shows up in the nude wearing his Third Reich workout headband, he says something different. The second night of the dream he says, “I’m deporting your daughter even though she was born in New York.” The third night he looks at Anne Frank and says, “you’re fired.”

There is a saying in Spanish: “el león no es como lo pinta.” The exact translation is “the lion is not the way they paint him.” Of course, everything sounds better in Spanish. If you say the word “sacapunta” out loud it sounds like you’re cursing someone out in a romantic way. What you’re really saying is: “pencil sharpener.” Words hold weight. In elementary schools across the country teachers say, “choose your words” to their students. During the recent media frenzy it seems that many adults have forgotten this basic rule.

I watch the news. Here is what I see: On a recent interview with CNN Trump says that he is for a ban on Muslims coming into the United States. I check the date to see if it’s still 2016 and I’m living in New York City or if it’s 1936 and I’m living in Nazi Germany, because for one to say, “Muslims shouldn’t be allowed into the United States,” to me is the same thing as saying “Jews should wear a yellow star when they walk down the street.”

My daughter is half Mexican Catholic and Half Ashkenazi Jewish. In my home we speak mainly Spanish but at Grandma’s house we speak English. There is a statue of the Virgin of Guadalupe in my daughter’s room and a Hebrew prayer book on her bookshelf. Just recently we celebrated her first birthday with a kosher Aztec Princess cake. In my home we choose our words wisely and with care.

“Are you hungry?” “Tienes hambre?”

“You are Catholic.” “Eres Católica.”

“You are Mexican.” “Eres Mexicana.”

It’s funny to watch Trump and Hillary go at it at the debate. It’s funny to flip through the various memes on my computer and laugh at the idiocies of the current political climate. What’s not funny is that I have a one-year-old daughter who I must teach the rules of loving kindness — I must teach her to someday have tolerance for the man in the three-piece suit who haunts my dreams with one carefully chosen piece of Nazi regalia.

In our apartment building in Brooklyn we live with Jews, Catholics, Muslims, Atheists, non-believers, believers, Jehovah’s Witnesses; people who are Indian, Spanish, Colombian, Ecuadorian, Russian, African, and Italian. Yet the media practices the same form of “othering” that was practiced when Christopher Columbus landed in the Bahamas and declared that the Native people were “savages.”

Who on the news, in the White House, up on the top floor of the high rise represents the working class of my building? My one apartment building built in 1924 holds the world. Who represents or who will represent my daughter? If no one represents her, how will I teach her to represent herself? Three Muslim children live on the first floor of my building. They hold the door for me. They say hello to me. They are afraid to go to school. What if your child was afraid to go to school? In what language will I explain to my daughter that life is a game of hardball that no one wins so you have to swing like Babe Ruth and run like hell to home base?

“El león no es como lo pinta.” “The lion is not the way they paint him.”

In my dream, I’m in the attic again. Anne Frank and I are writing a story about a butterfly. Then we hear the boots. The door swings open. We are expecting Trump, only it’s not him. Instead it’s someone else. We don’t recognize the face at first because he has shaved off his mustache and he’s wearing a blue suit with a red tie.

“I’ve won the election,” he says, and I look down at my arm to see an almost invisible black ink forming and numbers that weren’t there before are appearing between my wrist and my elbow.

“I think Islam hates us,” he says in his thick German accent.

When I wake up I’m sweating again. I make a note in the margin of my journal. It reads: “when the baby is old enough, start talking to her about how things like the Holocaust happen when great power falls into the wrong hands.” When the world starts measuring a culture by the size of their noses, jawlines and heads. When people start throwing books of another language into the fire. When people stop using their words, people stop choosing their words.

How Do I Explain My Trump Nazi Nightmare to My Mexican American Daughter?