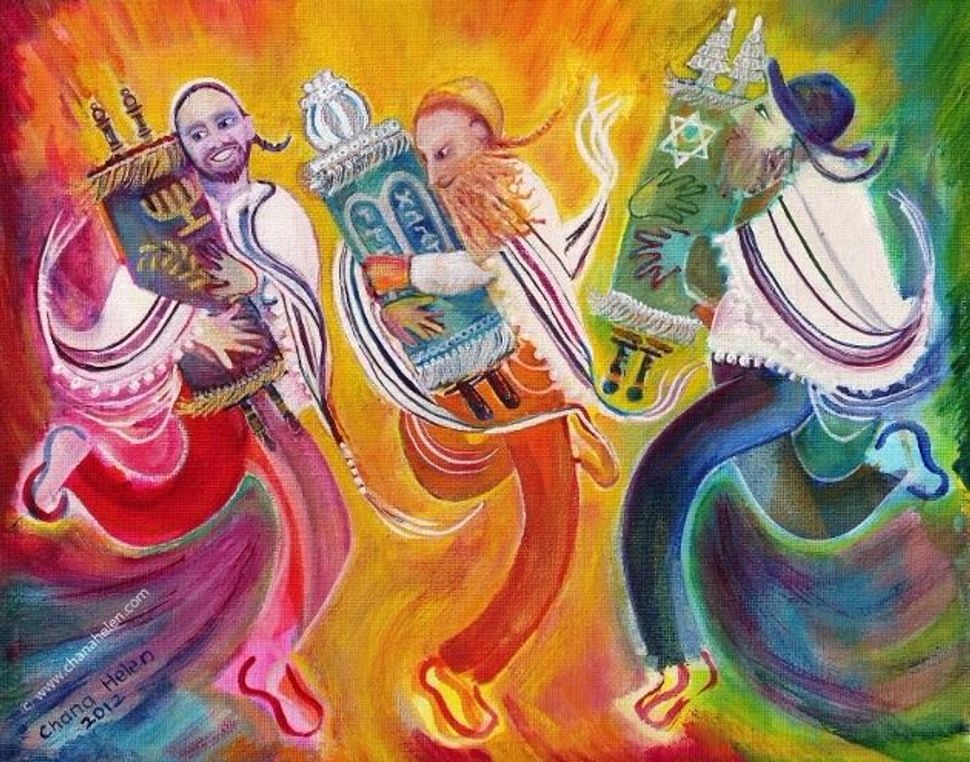 After graduating from Yeshiva University’s Stern College, Rachael Fried moved to Manhattan’s Washington Heights neighborhood. As she looked around for an Orthodox community that would welcome her, she could not find a synagogue where she felt comfortable as a young Orthodox, queer woman.

“I stopped going to shul altogether,” she said, using the Yiddish word for synagogue.

Not long after she decided to come out of the closet, the Beis was started, and she realized how much she had been hoping for a similar community to appear.

The Beis is a Modern Orthodox community started in 2013 by Hart Levine and his wife Yael. “Beis” is the Ashkenazi pronunciation of the Hebrew word Bayit, which means home. The community, now located at the Hudson Heights Shtiebel in Washington Heights, is composed mainly of post-college young professionals and takes pride in its diversity and inclusivity.

“We welcome people from all different backgrounds,” said Levine, 29. “We do things that are both traditional and less traditional; for instance, we do prayers in Hebrew, we sing a lot, we have a mechitzah (partition) for separate seating. But we also have people greeting whoever comes in; we hold meditation sessions; we have community members, boys and girls, who stand up in between prayers and give an explanation in English.”

Levine is aware that the Beis attracts many Jews who identify as LGBTQ.

“They often come from an Orthodox background, they live in other areas of the city, but they don’t feel like they belong to their communities,” he said.

The Orthodox Union, one of the most prominent Jewish organizations in the United States, has been largely funding The Beis for two years. “The key to the success of the Beis is Hart’s genuine desire to empower others,” said Rabbi Ilan Haber, national director of the OU’s Jewish Learning Initiative on Campus. Haber explained that the aim of the Beis was to build a community for young professionals that would offer learning and leadership opportunities. “We developed the Beis as a model for what is anticipated to be a “much broader national movement to facilitate Jewish growth and community for this incredibly important demographic.”

The OU maintains its position on homosexual relationships as stated in the Bible and its condemnation of institutionalized gay marriage.

“Everyone is welcome to participate regardless of their level of observance or personal choices,” said Haber. “I hope that we can inspire everyone to be more connected to their Judaism and experience community in authentic and meaningful ways. We can do this, and at the same time be true to the values and ideals of Orthodoxy and the OU.”

On the night of Yom Kippur (Day of Atonement), the first thing one could see when walking down the narrow hallway that leads to the Beis was a few stacks of pamphlets. Next to a guide on the observance of the holiday lay papers featuring six-word thoughts and prayers written by Orthodox LGBTQ teenagers and young adults. 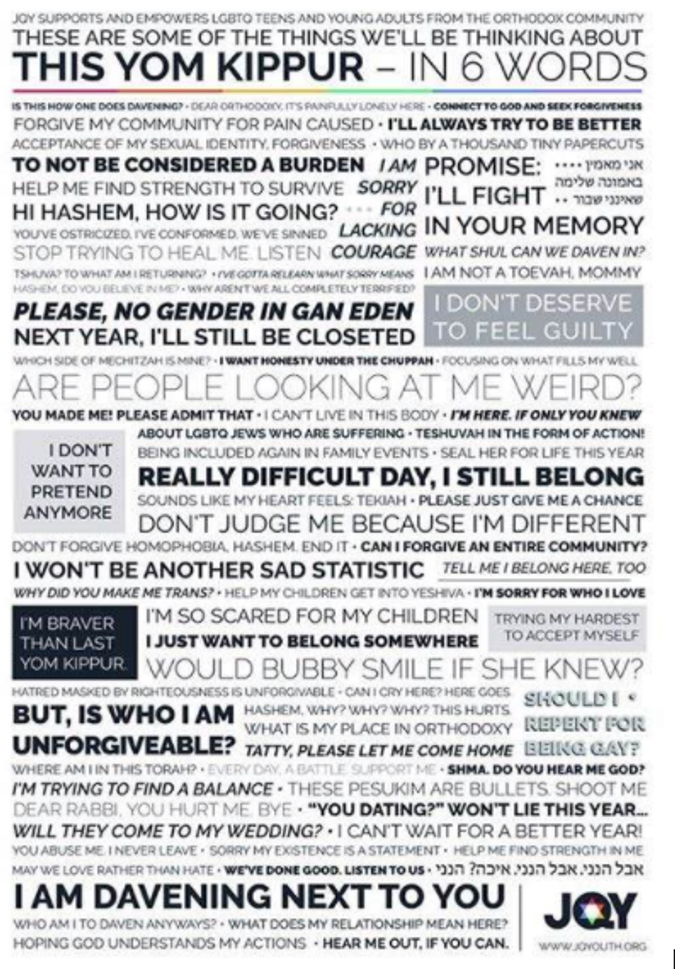 One of them read, “I don’t want to pretend anymore.” Another one pleaded: “Please, no gender in Gan Eden (Garden of Eden).” Others asked, “Will they come to my wedding?” “Can I forgive an entire community?”

Yom Kippur is considered to be the holiest of Jewish holidays. It is a 25-hour fast-day centered around repentance, forgiveness, and atonement. Around 225 people came this year from Manhattan, Brooklyn, Queens and New Jersey to attend the services at the Beis, said Levine.

“The aim of the Yom Kippur project was to humanize LGBTQ people through a series of anonymous thoughts that showcase the diversity of our community,” said Fried. “We had two goals: first, to reach people who identify as LGBTQ and show them they are not alone; but also to reach the larger Jewish community.”

The main struggle that Orthodox queer teenagers face, explained Fried, is loneliness. Teens don’t get to choose the community they belong to, and they fear to come out because they feel rejected a priori, due to lack of leaders and educators who are openly accepting.

“In the Orthodox community, there is a general assumption that people are straight; there is also an obsession with getting married,” she said. “So people are always trying to set you up with someone and they ask you ‘Are you dating anyone?’”

Levine saw the JQY Yom Kippur project and thought it was “really powerful.”

“Some people say, ‘Oh, this doesn’t belong to an Orthodox synagogue.’ But we thought it was important for people from that background to see it and understand that they are welcome. And we wanted people who don’t come from an LGBTQ background to see it, too, and learn about it.”

When Levine is criticized for the openness of his community, he replies that people come to his shul to pray to God, not to be judged by other people. “No one should be excluded,” he said.

Leana Jelen, 28, has recently returned from a year of studies at Pardes Institute in Jerusalem, and decided to spend Yom Kippur at the Beis.

“There are many shuls in the area,” she said. “I went to the Beis because there didn’t really seem to be another option that would feel like a good fit for me in terms of community. You know, when you’re choosing a shul it’s not just about the type of services, it’s also about the kind of people you want to be around.” Jelen considers the Beis to be traditional, intentional and warm. “People there are proactive about including people from the outside,” she said. “And they are open about the fact that they are welcoming to LGBTQ Jews.”

Jelen said that while many Orthodox shuls in the United States claim to be supportive of the LGBTQ community, in practice even the more liberal ones “are very ‘hush, hush’ about it.” The Beis, instead, is openly supportive.

“They allowed us to print the JQY sheet on the struggles faced by Orthodox LGBTQ teens and display it with all the other reading materials,” she said. “It wasn’t just like, ‘We support you.’ It was more like, ‘We understand it’s tough, so let’s think about this together.’ They let us take the lead. I thought it was really wonderful.”

The Beis does not attract only queer Jews: it also attracts many students and young professionals who are looking for a spiritual, open-minded, Orthodox environment.

Dillon Stanger, 24, came to spend Yom Kippur in Washington Heights from Wayne, New Jersey, where he works in sales. Stanger said that he likes the fact that the area, and the Beis in particular, are “inclusive.”

“At the Beis, you can meet people from different backgrounds. I immediately felt part of the community,” said Yael Scolnick, 19, an undergraduate student at The New School who came from Brooklyn. Scolnick enjoyed the services so much that she went back the following weekend for Shabbat.

The Beis is home, concluded Fried, stressing the uniqueness of the community. “If you are Jewish and you want a community where you can be yourself,” she said, “come to us.”