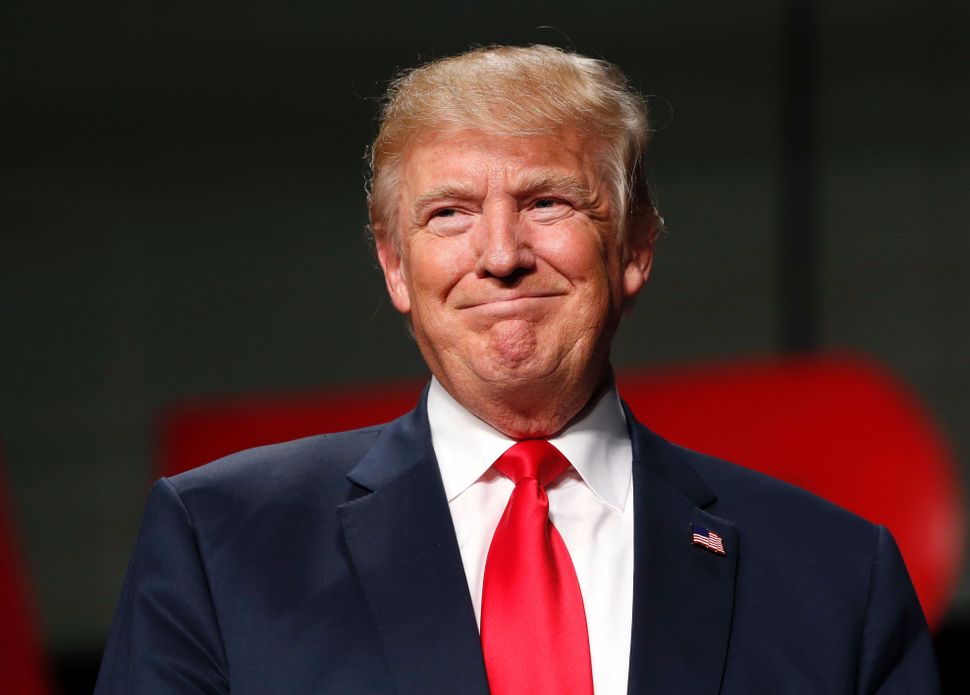 This is a bittersweet time. I truly love politics and have ever since my dad of blessed memory took me to stand on line with him in 1960 as he prepared to vote in the Kennedy-Nixon contest in Sheepshead Bay. Four years later, I remember my dad taking me to brief meetings of the North Woodmere Republican club (a minyan would have been a major gala). I sat there proudly flipping through the pages of my book of the Presidents; I can still remember Chester Arthur riding in a magnificent carriage looking like some foppish dandy.

Later, I would invent election games based closely on Challenge the Yankees and the more sophisticated Strat-O-Matic baseball board games of iconic fame.

To me, election night is not about exit polls and who can call the the race the quickest. It is about an exercise in democracy, a summing up of people not computers or corporations taking over the American enterprise.

So my heart is a little bit broken.

I believe in Donald J. Trump. No apology. His approach more closely approximates that of the populist. Mrs. Clinton has done a perfect job of reflecting her corporate backers.

I cannot say for sure who will win or whether I believe the election is “rigged.”

I do believe that it is naive of all of us over the age of ten in a process where upwards of two billion dollars will be spent to believe that computer or old fashioned ballot-stuffing or other irregularities are impossible or even insignificant.

I want American democracy to win. It’s all we have. I can’t fathom where technology will take us in the next ten years. It may be to places where individual freedoms and rights will be further truncated.

I know that many people reading this are deeply passionately committed to supporting Mrs. Clinton or at least to hating Trump. For the record, far too many of those have been sufficiently uncritical of their nominee and in doing so have enabled behaviors that once upon a time that would have seemed more Watergate than much ado about nothing.

I believe Trump by his own words has gotten an education on this campaign trail. Should he win, he can say with conviction, that he does not owe the Republican bosses and big shots a dime’s worth of his time. That is a powerful advantage.

Trump, may, like Roosevelt and Kennedy, prove to be something of a “traitor” to his class. Wall Street might have been more enthusiastic over Bernie Sanders than Donald Trump.

Should he win, I suspect he will get off to a bumpy start. His monetary policies need serious revision. But,as I have written previously, this is a man who actually hears the many voices of the people.

He could have jettisoned those voices a myriad number of times from the convention to the assault by the corporate Republicans to the powerful urge to just go quietly after his numerous missteps.

He has not done that.

There are words that he uses that have never been used to describe the relationship between elites and the people. I do believe you should not fear the many disconnected Trump voters who will or have already voted. Their pain is real and they need a friend in Washington.

When FDR died a man among the many Americans who mourned him said, “FDR was my friend.”

If you really want to understand why Donald J. Trump, win or lose, is going to attract upwards or in excess of 60,000,000 votes next Tuesday, it’s because a lot of them think that for the first time since Kennedy they may actually have a friend in the White House.

If nothing else, Democrats should reflect exactly why their candidate may be eliciting some other reaction from so many Americans.

In any event, here is to peace— not between Trump and Clinton. But between Americans who are going their separate ways this election season. Personally, I believe the future of the electoral college at long last, be seen as an institution that has served its purpose.

A truly national election, without red states and blue states needs to replace the mania to campaign only in “battleground” states.

And a truly national election would remind more clearly we are not some slice of a demographic or electoral pie.

We are, in fact, Americans.