What My Mother Risked on Kristallnacht 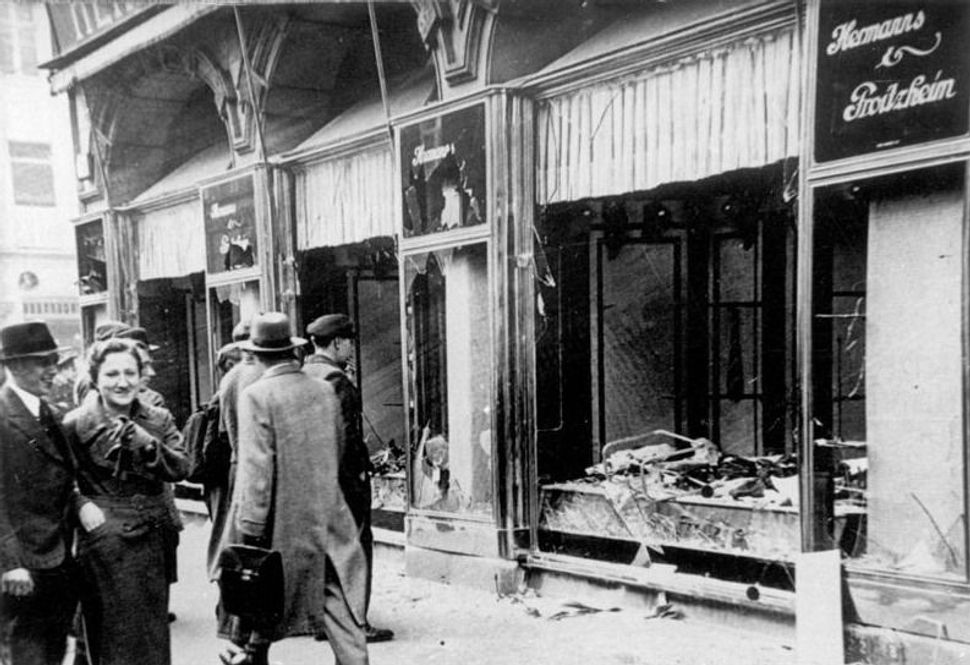 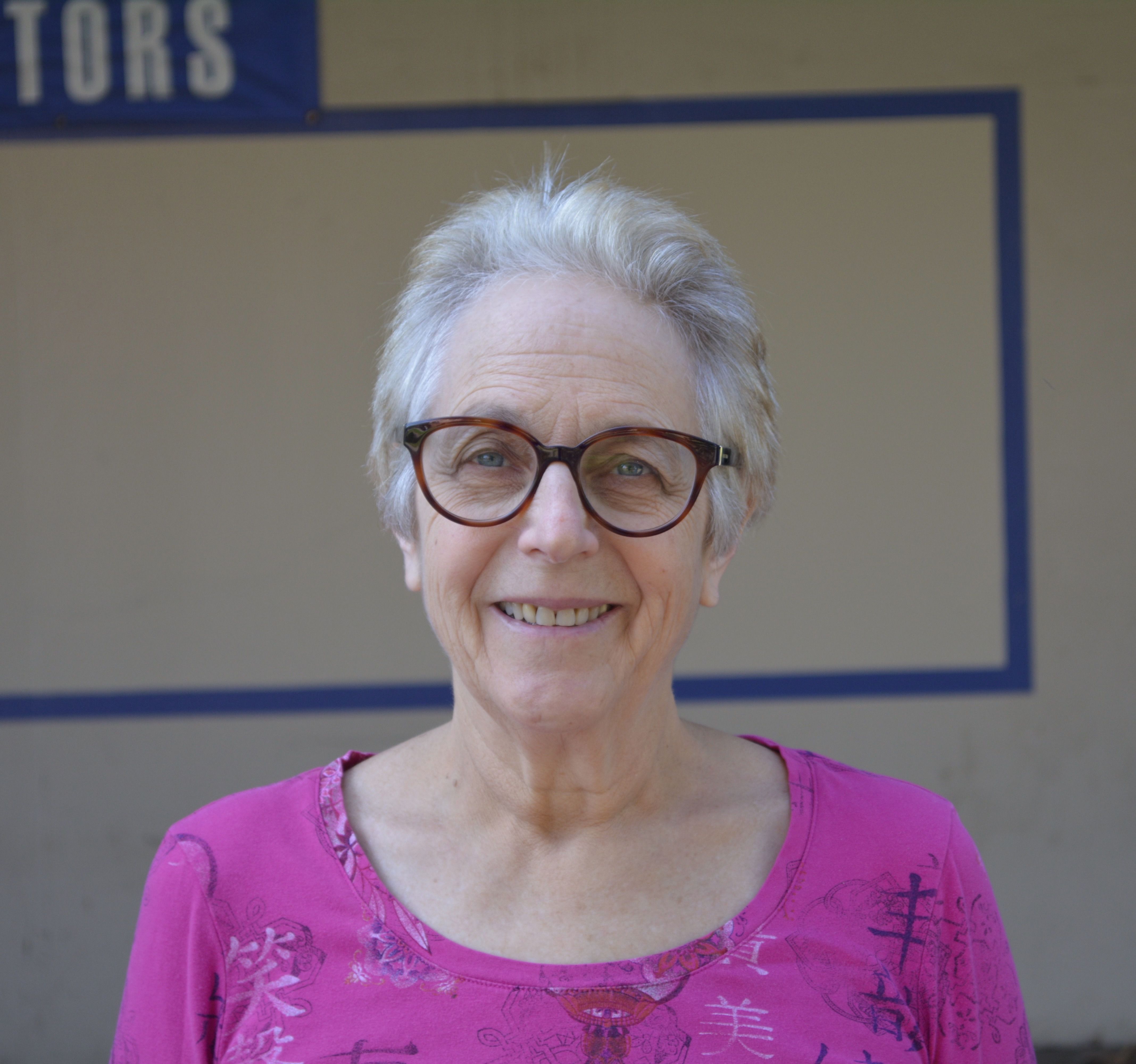 What is it in life that inspires or compels each of us to tell our stories? Is it the realization that we, too, have lived important historical events? Or is it something much more personal, some nugget of our experiences we want our children’s grandchildren to know? And if we have an important story that we have kept hidden for a time, what circumstances create the breakthrough moment of revealing, sharing, and confronting that story? Each time I read my mother’s 1988 article about what happened to her on Kristallnacht, I struggle anew with these questions. 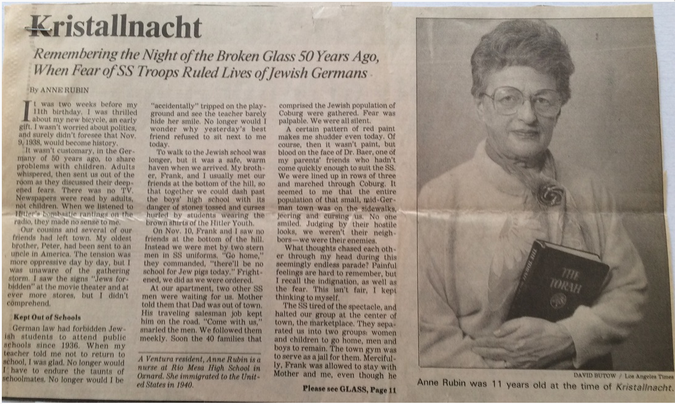 At the time, my mother told me that she had been inspired by Elie Wiesel’s Nobel Prize Acceptance speech, in which Wiesel called upon all who survived to bear witness to the persecution and atrocities committed by the Nazis. Now that I have reached the age and the stage of life that are the same as my mother’s were in 1988, I may ascribe additional motivations to her timing, but am forever grateful to have the written record she provided. In the summer of 1988, my mother, Anne Forchheimer Rubin z’l’, wrote an article detailing her memories of Kristallnacht in her birth town, Coburg, Germany. That October, with the 50th Anniversary of Kristallnacht approaching, she submitted her article to the Los Angeles Times. She was thrilled when the Times chose to publish her story on November 10, 1988; the 50th Anniversary of Kristallnacht. It was published on the front page of the local section of the newspaper under the headline “Kristallnacht Through a Scared Child’s Eyes.” The published article included a then current photograph.

For most of her life up to that point, my mother had insisted to me and to herself that she was not a Holocaust Survivor. She had been a refugee to the United States, entering in 1940. She, herself, had not been imprisoned in a concentration camp, although her father had been detained in one for some weeks. In the Survivor hierarchy of suffering, mother had seen her own trauma as minimal. Writing the article was the first step in mother’s internal transformation from refugee to survivor; from seeing her own story as one of negligible importance to one that was valid in its own right, yet another contribution to Holocaust History. Mother was a Jewish child born in Germany in 1927. Her town, Coburg, elected the first Nazi mayor in Germany that same year. Like all German Jews, the expected trajectory of her life was turned upside down by Hitler’s ascent to power in 1933. It is only from the distant perspective provided by 50 years of safety in the United States that my mother could process the pain, terror, and humiliation she, and all German Jews, experienced from 1933 until her escape on a Kindertransport in 1939.

There was so much in the article that she had never told me before. For example, members of the Hitler Youth would pelt her and her brother with stones as they walked each day to the small Jewish school that met inside a private home. Mother’s description of Kristallnacht starts with, “Two SS men were waiting for us when we got home. Mother told them Dad was out of town, his traveling salesman job kept him on the road. ‘Come with us,’ snarled the men.” The article then explains how my mother, her mother, and her brother were dragged to the Town Square, or Marktplatz, where they were pushed together with the 40 or so other Jews living in Coburg who had also been pulled away from their homes by other SS men. They were lined up in groups of three and forced to march through the streets. Mother wrote, “It seemed to me that the entire population of that small, mid-German town was on the sidewalks, jeering and cursing us. No one smiled. Judging by their hostile looks, we weren’t their neighbors, we were their enemies.” When the forced march reached the town gymnasium, a one story long brick building, the adult men were arrested. They were held in the gymnasium overnight, and sent to a concentration camp by train the next day. The women and children, including my mother, grandmother, and uncle, were released back to their homes. 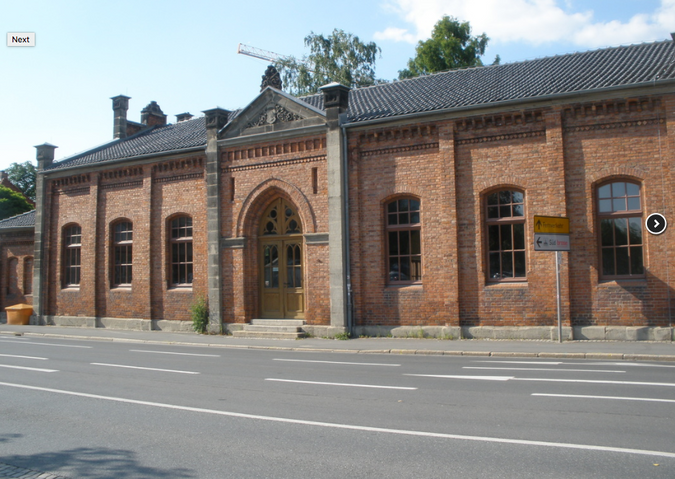 The city building where the adult Jewish men, including Emil Forchheimer were held on Krystalnacht. My mother and her friend smuggled sandwiches into the building to give the men something to eat. They were sent to Prison or to Dachau the next day. Mother did not see her father again until they were both in England several months later. Image by Courtesy Rachel Rubin-Green

The article included one story that I had heard before. The released, distraught women correctly guessed that children could walk past the SS guards, hand some food to their fathers, and leave safely. So the women prepared sandwiches for their husbands. My mother and two of her friends pedaled their bicycles to deliver the food. My mother wrote, “It was dark. The flickering torches interspersed among the crowd around the gym increased the nightmare feelings swirling through my mind. We heard talk of ‘burn the damn Jews.’ In a trance, spellbound by the lights, the dark, and the mob, we made our way around the side and into the gym.” My mother did find her father there with the other men. They cried together. That is where her article ends. When a few years later, I asked my mother when she next saw her father after that night, she told me that it was six months later when she arrived in England. Somehow; perhaps because he was a WWI veteran, or perhaps because he could prove he would leave Germany immediately upon his release, he was permitted to leave the prison or concentration camp where he had been incarcerated. He then left the country right away, without a detour to see his children.

It is only in great retrospect that I can see what a brave act, one of physical risk and spiritual resistance, it was for my mother and her friends to bring their fathers sandwiches that night. If courage is acting in spite of being afraid, my mother and her friends exemplified courage. They must have been petrified, but they still completed the task they had been given.

Mother was so proud of being published in the Times that she went out and bought 10 copies of the paper. She cut out her article and mailed copies to everyone she still knew from her Coburg childhood, including both her brothers. Someone who received it, unknown to me till this day, translated the article into German and sent the translation to Coburg, where it has had a long and productive life.

So why, in 1988, did my mother embrace the task of sharing this difficult and painful part of her life? Yes, as my mother told me then, it could have been Elie Wiesel’s encouragement. Or, that after almost 50 years of safety in the United States, she could process the horrible and terrifying experiences of her childhood. It also may have been the death of her own mother a year before. And it may have been that in 1988, two little boys called her Grandma, just like now, in 2016, two little boys call me Grandma, although in each case one is too young yet to speak.

Becoming a Grandmother allows me to touch the future in a way I never before thought possible. My children move me forward in time, my grandchildren hurtle farther beyond, touching places way beyond my field of vision. What stories, or experiences, do I want to package, to transform into independent entities, so that the stories themselves can move into the future, even if I no longer carry them? As independent people, my grandchildren may or may not want to tell my stories when they become adults. However, my stories need to be written out, or recorded in some other way, to give my descendants the opportunity to share them if they wish. Now, as a Grandmother myself, I have come to believe that it was this story telling imperative that compelled my mother to write out the memories that I have shared in this article at the time she did. As I continue to write and tell and record her stories and my own, I hope to be an agent worthy of this legacy.

What My Mother Risked on Kristallnacht