Picking Up the Pieces, Together 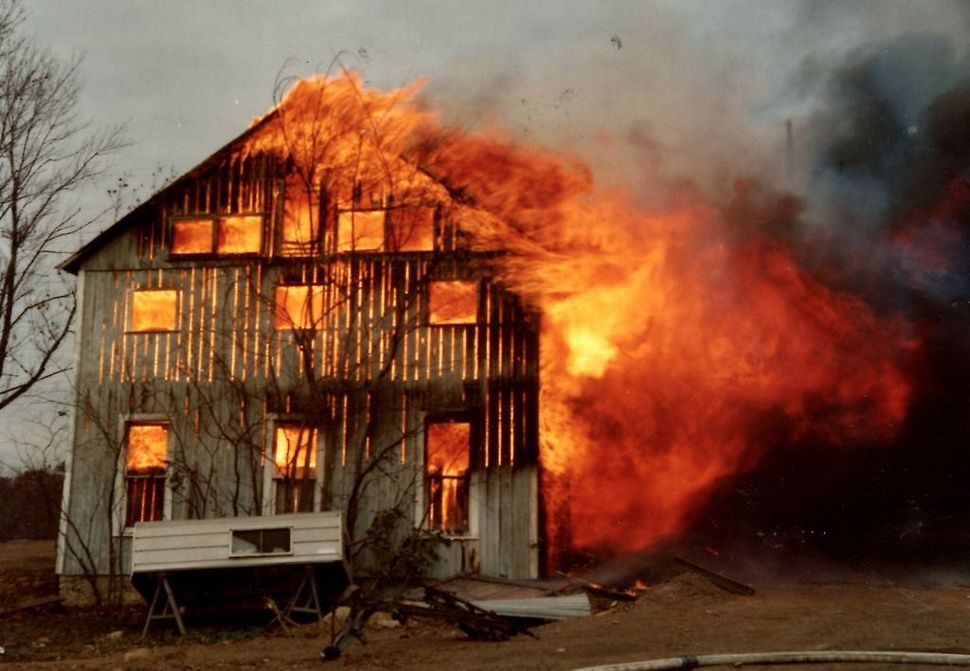 Nov 9 and 10 mark Kristallnacht, the Night of Broken Glass. Over seventy years ago today, thousands of Jewish businesses were destroyed in Germany and over one thousand synagogues burned to the ground. In Philadelphia yesterday, a store was vandalized with a swastika and a “Heil Trump” sign was left emblazoned on its walls. Walking my children to school on a gray Wednesday morning in Manhattan, I felt that heaviness acutely: a fear of the unknown, a sense of being lost in my own home, a taste of what hateful vitriolic rhetoric can bring about.

The country feels aflame in the wake of our election; what are we to do with that fire? The image of a burning home is encountered in this week’s Torah portion. Rabbinic legend likens Abraham’s discovery of the Divine to a person who notices a building in flames. “Surely, someone must live here!” says the midrash. Our country is afire with discord, misunderstanding, mistrust and we, family and friends, red and blue, live here together in this house.

While last month was full of sweetness, possibility and a marathon of high holy days, we now find ourselves in a more somber month of Cheshvan or “Mar Cheshvan,” a bitter Cheshvan, as it’s traditionally called in the Hebrew calendar. Bitter because Cheshvan is the only month that does not hold any holidays; it contains no special mitzvot, commandments or connections associated with the time.

It was a week ago on the first day of the Hebrew month of Cheshvan when I encountered that bitterness in a stinging way.

Saul, a friend and regular attendee at Base where I work, is a bright young man in his early 20s; a recent college graduate pursuing writing and a degree in social work, Saul struggles with persistent depressive order. His therapist had recommended he check himself into an emergency psychiatric ward; Saul called asking me for my opinion that Cheshvan morning.

In the unit, Saul and I discussed the Torah portion and his sense of feeling trapped.

Noah – the protagonist of last week’s Torah portion – was also trapped. Forty days and forty nights, alone, with family and beasts of every stripe, with odor and abundant noise. How claustrophobic must that trip have felt? At the same time, that ark protected Noah from the utter havoc, the chaotic destruction that swelled outside with the water’s waves. The ark resembled the ward in that way, serving as a holding space and not a healing place.

In the ward we remarked how Noah had a dove to send out to dry land while in the hospital there was no phone access. No tweets, digital or fowl.

“But you still have messenger birds, as it were, coming into your ark,” I assured Saul. “You have family and friends who love you and are here for you, coming to visit you here, reminding you that dry land exists.”

Saul has since been transferred out of the hospital’s psychiatric emergency room and into an inpatient rehab facility. He is entering a healing place. It dawns on me now that for those struggling with the election’s results are in a similar holding space of sorts, not quite ready to heal, still grieving, as in a quasi-shiva, mourning a new confusing reality.

Despair can be dangerous drug leading people to do inexplicable things. This past September happened to be National Suicide Prevention Awareness Month. According to the National Alliance on Mental Illness, suicide is the third leading cause of death among young people. And so, I pray that our bitterness never turn into despair, that we may open our hearts to being able to “ram” (Hebrew for uplift) the “mar” (Hebrew for bitter). When we can acknowledge the suffering and pain we often try to deny exists, when we are able to ask courageously for help – these are victories worth celebrating. As Rebbe Nachman of Bratzlav taught, “If you believe you have the power to destroy, believe you have the power to repair.” Here’s to picking up the pieces, with strength, together.

Picking Up the Pieces, Together