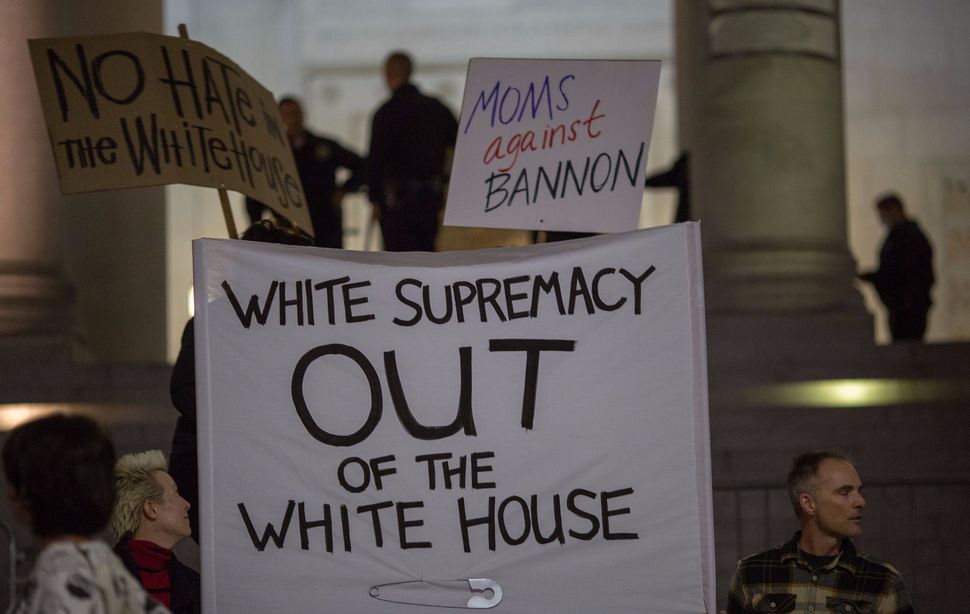 When I learned of Trump’s first round of political appointments, I turned immediately to my community. I knew that the leaders and organizations that have nourished me and been part of my family’s Jewish life would understand the dire call to act. The possibility of white supremacists occupying the White House would surely draw a clear and unified response. It pains me to say that some of these most important leaders and organizations have remained silent.

I have called and emailed several leaders, such as leaders of Jewish Federations and chapters of the American Jewish Committee, asking when will they speak out. The response I receive is chilling. They tell me they are not political. And, thus, because they are not political, they must refrain from speaking against Trump’s political appointments.

I am chilled because I am an historian of modern Jewry, and I know that Jewish organizations sometimes have chosen quietism to great detriment, whether we look to 1930s Germany or earlier periods in Jewish history. I am also chilled because I recognize this response as, at best, a misunderstanding of what it means to be part of the American nonprofit complex, and, at worst, a cowardly lie.

Unlike a corporation that has a select group of shareholders to which it must answer, a charitable organization must regard the public as its shareholders. This is why, when a policy or political appointment threatens the very nature of our country’s public good, there are no other organizations as well positioned as 501(c)3 designated ones to issue a protest in the name of the public. The most compelling reason that our political process continues to exempt nonprofit organizations from taxation is to give them the flexibility to speak about and act for the public good.

Anti-Semitism, racism, sexism, and homophobia are all deeply political forms of behavior that work to change how power operates. These are not and never should be partisan issues. Yet as I write, countless 501(c)3 organizations cloak their silence about Trump’s appointment of white supremacists to high posts in his administration as a virtue or a mandate: that of being apolitical. We must tell these organizations that we cannot tolerate their evasion, and we will not support them if they persist in it.

Whether they like it or not, our country’s charitable organizations are part of our political process and owe their very existence to it. Now is the time for the leaders and organizations to step up to the duty of their status and the resources that we, the public, have entrusted to them. At this moment, to do anything else would be an act of cowardice.