How Jews Can Help Dismantle White Supremacy In Trump’s America 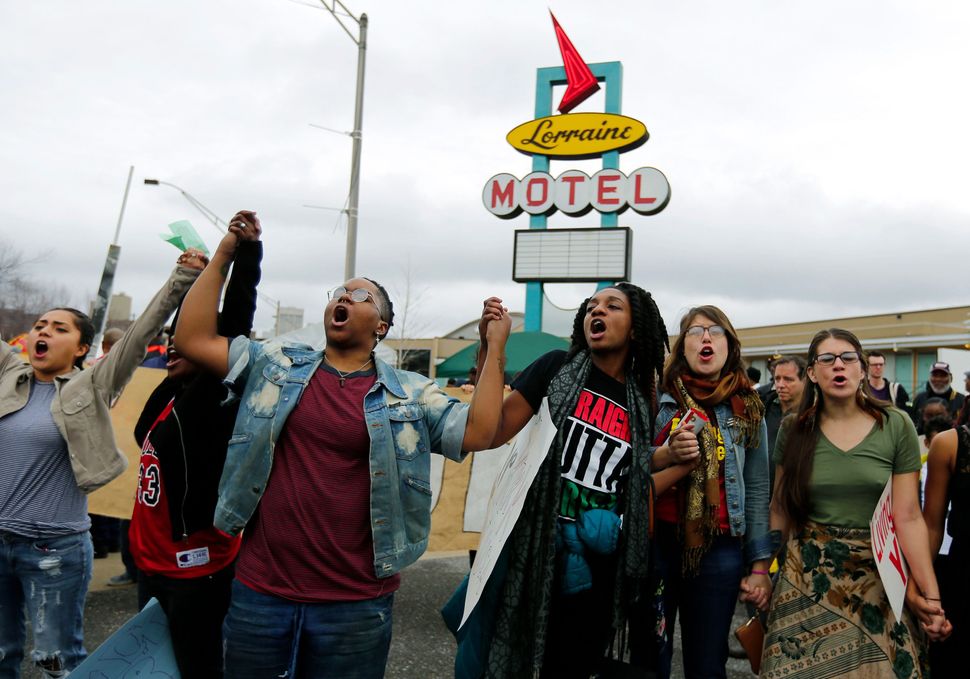 As Donald Trump ascends to the presidency, the American Jewish community faces a critical question: under a populist president with a penchant for scapegoating and mistrust of non-white communities, who are we?

In America the Pigmentocracy, Jews—the vast majority of whom are Ashkenazi—enjoy the many unearned prizes of whiteness: physical security, economic stability, and legal protections.

But in America the Ethno-Religious State, we are not white. Dylann Roof invokes us alongside African Americans in his manifesto. White supremacists target us online and in tiny Montana towns. As Emma Green wrote of the alt-right in the Atlantic: “Jews are not included in their vision of a perfect, white, ethno-state.”

In truth, neither identity negates the other. White Jews in this country and abroad have been oppressed and we have been oppressors. (Too often, the former is raised as moral justification for the latter.) Being a white American Jew means existing in tension, with a past characterized by persecution, and a present buoyed by exceptional privilege.

When leaders of more than a few major Jewish organizations opt to celebrate Trump, they fail to use the lessons of our people as warnings to other groups. They are saying “never again—to us.” Held captive to trauma, they act on the survivalist Jewish instinct to partner with power.

We must fight this instinct. As Trump escorts white supremacists from the margins to the mainstream, American Jews should see our own welfare as deeply intertwined with the fates of other minority groups. We should partner with them, stand in solidarity with them, and teach our children that perspective.

That means learning to understand ourselves as both white and non-white.

We need a political ethic informed by the part of us that has never been white and political priorities that are enabled and emboldened by our ability pass as though we were.

This will require us to rethink how we teach Jewish identity to our children and to ourselves.

Jewish day schools should require courses that focus on the histories and cultures of Black, Latino, Asian-American and other non-white groups in the United States—taught alongside Jewish studies. These students—especially those of Ashkenazi ancestry—already learn their own ethnic history. Knowing the stories, cultures, and perspectives of people of color, will empower them to extrapolate beyond Jewish oppression narratives and advocate for other groups.

As for adults, Jewish communities and individuals should pursue self-education and honest wrestling. Chavurot, synagogue sisterhoods and brotherhoods, book clubs should study and encounter other marginalized groups and consider the racist structures we tacitly support and from which we profit.

This kind of education can follow readily available blueprints. The Syllabus for White People to Educate Themselves, the Platform for Black Lives, and Carol Anderson’s White Rage are lucid, intersectional primers on racial oppression. The Brookings Institution and the Washington Post have published lists of books one can read to learn about Islam. To understand the history of anti-immigrant sentiment, groups can read John Highman’s Strangers in the Land, using his footnotes to guide further research. Podcasts like as NPR’s Code Switch, the New Republic’s Intersection, Nia King’s We Want the Airwaves, and Two Brown Girls will help disrupt the notion that Jewish persecution lives in a special Jewish silo. The list, like the learning, is endless.

So that when Jewish kids see video of police shooting an unarmed Black man, they understand that the destruction of non-white bodies has a long past.

So that when Jews hear members of Congress crusade to stop the resettlement of “dangerous” Syrian families, we recall that 19th century Americans saw the Irish escaping famine as slothful drunkards, and, in 1939 feared our own ancestors fleeing the ovens of Birkenau.

Oppression echoes across generations. Jews should be able to recognize it—and act—even when we are not the targets.

Ami Fields-Meyer is a writer and Coro Fellow in Public Affairs in New York City.

How Jews Can Help Dismantle White Supremacy In Trump’s America