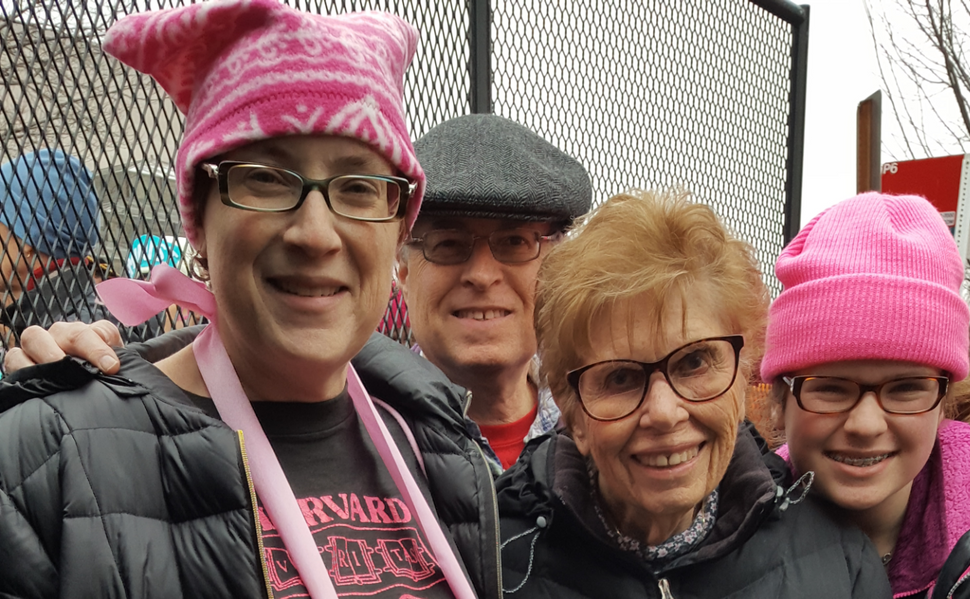 Jews were well represented at Saturday’s Women’s March on Washington. But with attendance estimates as yet not definitively calculated but ranging in varied sources from “several hundred thousand,” to “far exceeding the turnout at Friday’s inauguration,” to “1.5 million,” most nationalities were as well.

Still, in protests ranging from the Civil Rights era, to the 60s antiwar mobilizations, to opposition to Iran-Contra, and then the Iraq invasion, to now, Jews have always played a outsized role. It’s in our DNA. We stand on principle, we’re vocal, we organize, we’re creative, we’re loud. And we certainly know how to migrate — to wherever dissent is occuring.

Yet, as most of this week’s participants well knew, this protest was unlike any other in recent history — or perhaps ever. With the reins of power transfered to a man at best unpredictable, at worst perilously dangerous, and the fact that a purported 71% of American Jews voted for Hillary Clinton, well, that calls for Jews to get out there in even larger numbers.

And they did. The historic Sixth and I Synagogue, which describes itself as non-denominational, non-membership, and non-traditional, was a center of Jewish activity during the Inauguration and March.

On Jan. 17, the synagogue was the site of the “Refugee Ball – An Alternative Inaugural Ball,” a capacity event that offered Jewish solidarity, food and advice for immigrants, asylum seekers, and advocates.

The synagogue, along with Jews United for Justice, and T’ruah, hosted a “Gathering of Strength” on Saturday morning, preceding the Women’s March. The Shabbat service highlighted Torah passages as well as commentary on contemporary visionaries, with a focus on women and those groups under threat of hate or violence.

Another Shabbat morning gathering with food and prayer was held by the Religious Action Center staff and other Reform Jewish participants. The RAC also held an Open House until late afternoon at its Dupont Circle headquarters.

Out on the streets of the Capital, this reporter was heartened to hear slogans against anti-Semitism and others denouncing Nazis mixed into the standard chants, (i.e., “This is what democracy looks like,” “Hey hey, ho ho, Donald Trump has got to go,” etc.). Not one specifically anti-Israel chant was heard during Friday’s protest march (which originated across from Union Station and proceeded along the outskirts of the National Mall and the Inauguration ceremonies), or during Saturday’s massive march. We heard just one mention of Palestinian rights mixed in with other concerns of a Friday protester.

This absence of overt Israel bashing at Trump protest rallies appears to be in contrast to the anti-Israel sentiment freely expressed at many protests in recent years, especially from more leftist contingents. This could suggest that Trump supporters are associated with a general racist backlash among minority groups that include Jews, eliciting more sympathy for Jews this time around. Parallels are also being drawn between the policies and stated positions of Trump and his cabinet members and Nazi ideology and leaders, including Hitler, as well as the KKK, which also targets Jews.

Anti-Semitic acts have been on the rise as well, and two regular chants of this movement, “Love Trumps Hate” and “No Trump, No KKK, No Fascist USA,” would seem to embrace Jews in the sympathetic mix, and maybe even by extension, Israel (barring, of course, potential controversial future collaborations between Trump and Netanyahu, including a provocative Embassy move).

Nonetheless, Will Luckman of Brooklyn held an anti-Nazi sign high during Friday’s protest.

“Trump’s camp is very troubling, and it represents undercurrents of racism and nationalism that are entirely un-American,” Luckman, an editor for Brooklyn-based Powerhouse Books, told the Forward. “I’m troubled by the potential rise of fascism in the U.S., and so I am out here today to resist that and fight back,” he said.

Participating in such a well-attended and global march left many participants feeling more hopeful and confident than since, well, Nov. 8.

“I found the experience incredibly powerful and empowering,” said Alexis Ortiz, a member of New York-based Jews for Racial and Economic Justice, and an HIAS Young Leader representative. “I am a Jewish woman of color, and was honored to participate in the women of color-led #ItTakesRoots delegation, together with domestic workers, migrants, and grassroots community leaders from all across the country,” she said. “We are the majority, we have the solutions, and we’re ready to lead.”

Julia Gordon of Silver Spring, Maryland wore a large placard around her neck with the Hebrew inscription for “Justice, Justice, Shall You Pursue.”

“I found the sign online and printed it as my poster, because it really spoke to me,” she explained. The artist, Ruth Mergi, offered it to Women’s March attendees as a free download.

“This particular sentence in the Torah has been a favorite of mine since childhood,” said Gordon. Perhaps not coincidentally, she ultimately became a lawyer who has devoted her career to public interest work. “Much commentary focuses on the fact that the word ‘justice’ is repeated, and my favorite interpretation is that both the ends and the means must be just,” she said, noting that she preferred this sign over others that seemed more mean-spirited. “I also loved that the artist changed the quote so that the verb was in the feminine form,” she added. “More broadly, because my values and politics are rooted in my Judaism, it felt important to signify that commitment in my public expression today.”

Although Gordon said that her Washington synagogue, Adas Israel, was well represented there, she was marching with her mother-in-law, Shirley Berman, from Ocean, New Jersey (“her age is north of 85 and yet she walked and stood for 6 hours straight,” Gordon interjected), her 13-year-old daughter, a student at the Charles E. Smith Jewish Day School in Rockville, and her husband, who she said loves and supports all the strong women in his life.

“The incoming Administration has taken direct aim at some issues I’ve worked on professionally for decades, especially consumer protection and access to justice, as well as many other issues that deeply concern me,” Gordon said. They include immigration, racism, the environment, and health care. “It’s both a duty and a privilege for me to be part of a movement that will resist losing ground on these critical fronts,” she said.