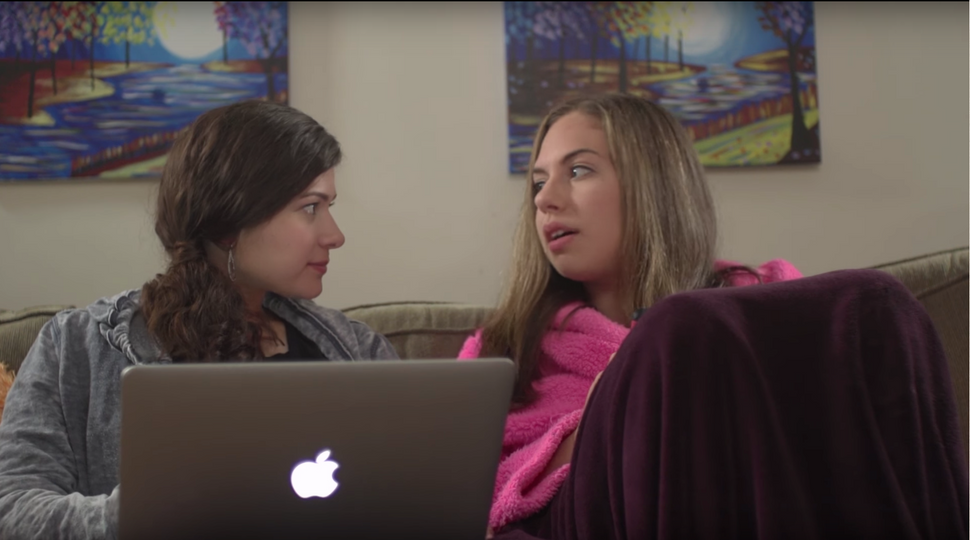 In the Modern Orthodox communities of New York City, virtually everyone seems to have heard of “Soon By You,” a web series on a group of friends navigating the Jewish dating scene in Manhattan. The pilot episode of the series, released last year, counts more than 100,000 hits on YouTube.

I was invited to see a preview of a new episode of the show. If you are fine with reading a few spoilers, I am now going to tell you what happens in it.

The title of the episode is “Paths.”

In the first scene, Sarah F. is drawing in her apartment, when Ilana, her roommate, walks in. Ilana has an upset expression on her face, so Sarah asks her, “What’s going on?”

After a few minutes of back-and-forth, Sarah finds out that Ilana slept in her boyfriend’s dorm room uptown in Yeshiva University. She managed to sneak past the security guard and stay overnight. Ilana says they didn’t do anything inappropriate, but she feels embarrassed and doesn’t know where this is going to lead. “I don’t even know what I want,” she says.

Sarah listens to her, but she doesn’t say anything. She is not prepared for this conversation.

In the second scene, David is getting ready for another day of rabbinical school. He is scrolling through his phone, smiling as he looks at the photos from last night, when his best friend Jake got married in Long Island. It was a beautiful, emotional ceremony, and, as he wildly danced to Hashem Melech with his friends, he couldn’t help but hoping that the next time he would go to a wedding, he would be the one under the chuppah.

The phone rings. Who could be calling at 7:30 in the morning? It’s Jake.

“I’m an idiot,” says Jake. “It cannot work. How could I think this would work.”

Jake had come out to him as gay one year earlier. The pressure the community and his family had put on him to settle down and build a Jewish family, however, had been too much; he continued to date women and he ultimately accepted to marry Leah, who had a sweet, plump face and did not care that Jake was a little different than the other men.

In the following scene, Sarah J. is shopping for makeup in Midtown with her sister Hannah. They are having an animated conversation while trying eyeshadows and lipsticks. Hannah is complaining that their parents will never truly accept her for the woman she’s become. “Well,” retorts Sarah J. “Will you ever accept them for who they are?”

“That’s different,” mutters Hannah. “This,” she says, as she tries a bronze eyeshadow on her hand. “Anyway. I see how they are embarrassed to talk about me with their friends. It hurts. Their friends ask of me as if I have some kind of disease, you know.” “It’s hard for them, too. They taught you so many things, and you have rejected everything.”

“I feel so free, Sarah. But I also feel horrible. It sucks.”

“You chose to go OTD,” fights back Sarah J. OTD stands for off the derech, literally “off the path,” an expression that refers to people who left Orthodoxy.

In the last scene of the episode, a new girl arrives to synagogue on Friday night. She is called Jen, and doesn’t know much about Judaism, because she was raised secular. But she knows how bad she wants to be a part of it. She sits in shul next to Sarah F., who helps her follow the prayer. She listens to every word of the Rabbi’s speech, although she merely understands half of it. She hates that she is so slow at reading Hebrew; she needs to make that extra effort which shows how new she is to the community. She sees all the other girls sitting in synagogue around her chatting with each other, because they read Hebrew so fluently that they don’t even need to follow the prayer anymore.

This episode of “Soon By You” does not exist. It’s a product of my imagination.

You see, when I watched the first few minutes of the pilot episode, “The Setup,” I thought the idea was lovely. I recognized the potential the show had to become a game-changer in the Modern Orthodox culture of New York. The misunderstanding that happens during the blind date in the restaurant is adorable.

What followed, though, was enormously disappointing.

The Orthodox world is currently dealing with complex challenges it has dismissed for too long. On the contrary, the world depicted in “Soon By You” is untouched by anything that is too complex; it depicts a world which no longer exists.

There is no premarital sex in the world portrayed by “Soon By You.”

There are no LGBTQ characters.

No character leaves Orthodoxy and goes off the derech.

And all characters seem to be born into Orthodox families, with none of them having a different background.

“Soon By You” is the most heteronormative, stereotypical show I’ve seen in a long time. It doesn’t take any risks; it does not provoke its viewers.

In one scene of the 3rd episode, when the guys decide to organize a Shabbat dinner, the girls say that they will host the dinner instead, because a “guys’ apartment” is for sure dirty and messy. Guys can’t cook and keep their place clean. Girls, instead, can. Well, in the Modern Orthodox Jewish world I have lived in, things are different. Some guys happen to be wonderful chefs (you should taste my roommate’s tacos). Some girls happen to live in disgustingly messy apartments. Some girls get engaged to boys and other girls get engaged to girls.

When we perpetuate stereotypes about gender, religion and society, we don’t benefit anyone. We just freeze our world into a sad, unrealistic picture of what some wished it were but will actually never be.

“Soon By You,” which was awarded with Best Short at the Washington Jewish Film Festival in 2016, is largely funded by its viewers, who can donate through an ongoing Jewcer campaign. Among the thousands of fans, many post enthusiastic comments on YouTube, such as “So much fun! I love it! Every episode just gets better,” and “Please make more! This show is brilliant!﻿”

The show is obviously a crowd pleaser—but that doesn’t excuse it from aiming higher.

The producers have openly compared “Soon By You” to the Israeli hit show “Srugim,” which aired on Yes from 2008 through 2012. “Srugim” was famous for taking many risks. It touched upon important issues in the Israeli religious society.

“Soon By You,” in contrast to “Srugim,” almost appears to be the result of a censored project presented by a group of yeshiva high school students. In the forthcoming episodes, I would like it to take a few more risks and discuss real issues — not elegantly avoid them, one by one.