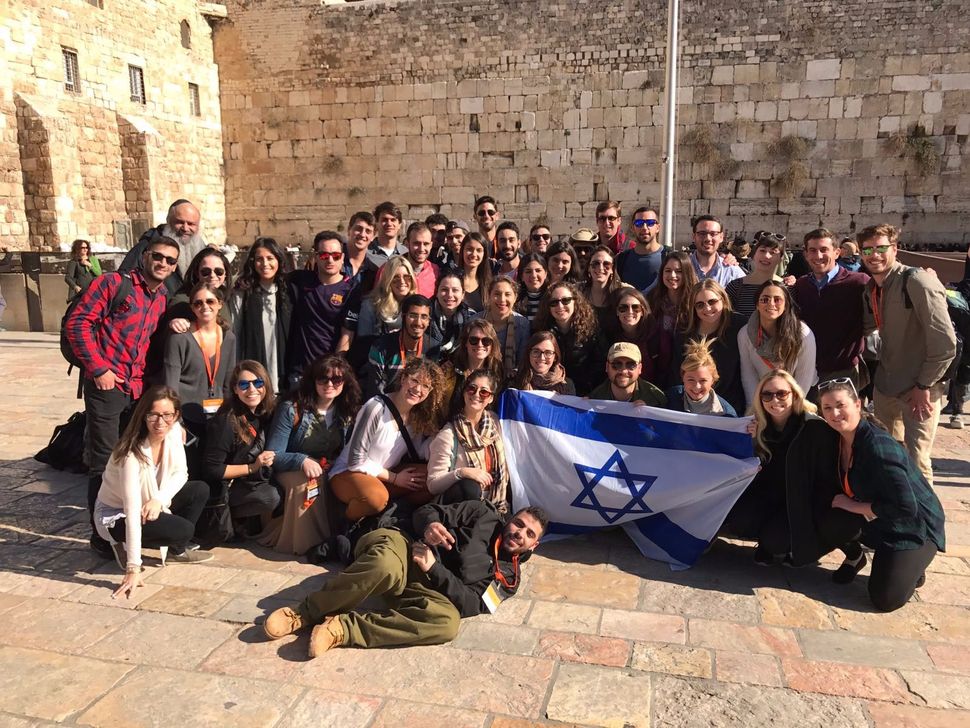 The 2013 Pew Forum “A Portrait of Jewish Americans” posed the question, “What does being Jewish mean in America today?”

On the final day of a free, 10-day Birthright trip to Israel, 39 Jewish Americans participants (ages 21-27) were asked the same question. Six young Jewish Israelis, who also participated in the entire trip and discussion, accompanied the American participants. Our question to the millennials was, “What does it mean to be a Jew today?”

Similar to the Pew Study, we found that to Jewish American millennials, Jewish identity is largely about traditions, ethics, and remembering our history rather than living in Israel or being religiously observant.

More significantly, Jewish American millennials who have been on Birthright may place a higher value on remembering the Holocaust, leading an ethical/moral life and observing Jewish law, compared to the average American millennial Jew.

The Birthright participants, hailing from all over the United States, could be viewed as typical Jewish American millennials. Most had never experienced any Jewish observance and were visiting Israel for the first time.

On average, the group thought that the most important qualities of being a Jew included maintaining Jewish traditions, being people of morals, helping others, remembering the Holocaust, and believing in God.

They believed that the least important qualities were eating kosher, celebrating a Bar/Bat Mitzvah, living in Israel, marrying a Jew, and serving in the Israeli army. 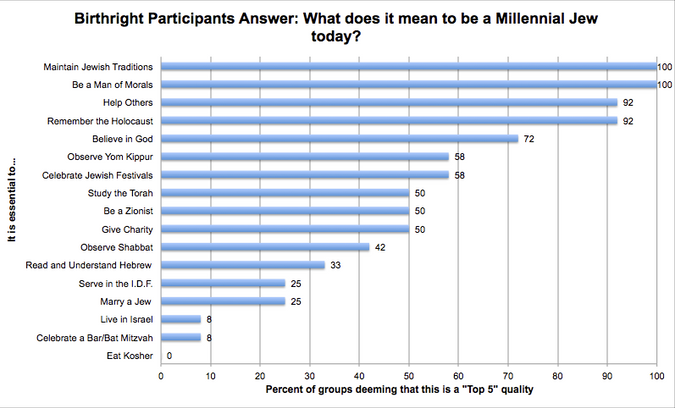 When comparing our study to the Pew Study findings about Jewish American millennials, we found a few significant insights:

• Jewish American millennials who have just finished Birthright may value the importance of observing Jewish law more than the general Jewish American millennial population. Our findings showed that 33 percent believed that observing Jewish law (such as keeping kosher, Shabbat, and Yom Kippur) was an essential part of being Jewish, compared to Pew’s 20 percent.

Perhaps the most dynamic discussion during this exercise was about intermarriage. Only 25% put “marrying a Jew” in the top 5 essential parts of being a Jew. Although none of the participants were married yet, it is compelling to compare this statistic against the Pew’s finding that 58% of Jewish Americans have a spouse that is not Jewish.

Another discussion topic was whether being a Zionist was an essential part of being Jewish. While the Pew Study found that only 32 percent of millennials believe in the Jewish importance of caring about Israel, we found that 50 percent believed that being a Zionist was essential to Jewish Identity. Perhaps the discrepancy in the findings has to do with the wording of the question, or perhaps it has to do with having recently experienced 10 days in Israel. Most interestingly, this is one of Birthright’s essential goals— to increase the connection between Diaspora Jews and Israel.

Eliana Rudee is a fellow with the news and public policy group Haym Salomon Center. Her bylines have been featured in USA Today, New York Daily News, Forbes, and The Hill.