Are We Praying Against Trump? 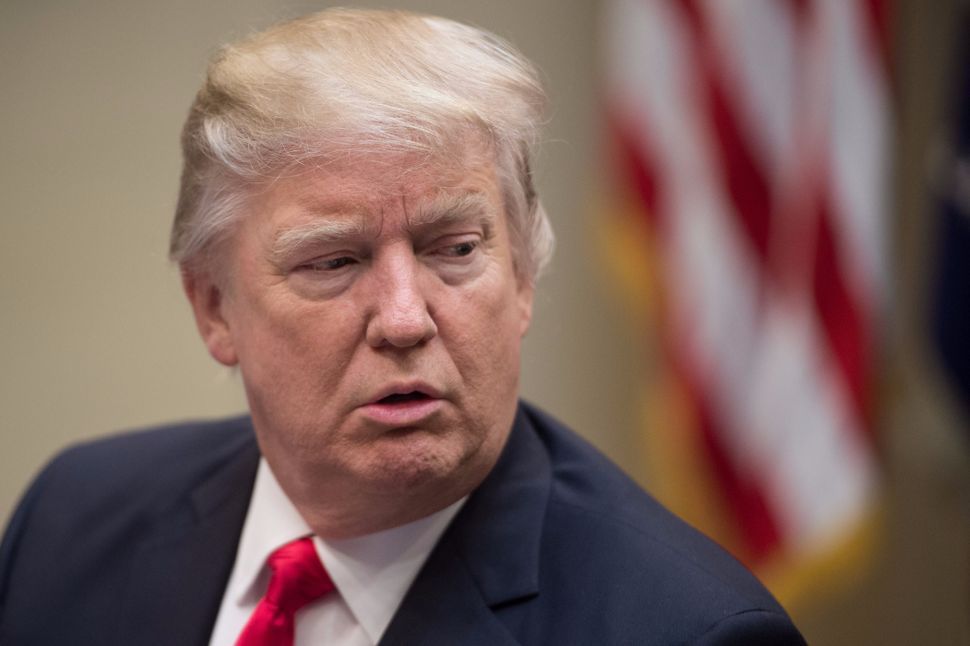 Some American Jews may now find themselves in a largely unprecedented predicament: that of praying against their own government. It is well known among synagogue goers that there is a prayer for the U.S. government in most prayer books, recited on Shabbat after the Torah service (usually followed by a prayer for the welfare of the State of Israel). What may be less well known is that there is a prayer in the Amidah (the silent standing prayer also known as the Shemoneh Esrei) which in some versions is a prayer against the government. To be more specific: against a wicked government.

When praying this section I used to see images of Hamas, of Mugambe, of ISIS, or other governments acting with willful arrogance and violence throughout the world, varying with the news cycle. Since last week I see Trump’s face along with others from his administration. We knew they were dangerous, but Friday’s Muslim travel ban made clear the global scale of their threat.

The Chabad version of this prayer, edited by Reb Schneur Zalman of Liadi (the Alter Rebbe 1745-1812), reads “and may you swiftly uproot, break, crush and humble the wicked government/the reign of the wicked” (malchut ha-rasha’a). The Alter Rebbe’s version preserves an emphasis found in the oldest versions, like the one found in the Cairo Genizah which reads “And let the arrogant government (malchut ha zadon) be speedily uprooted in our days”. Maimonides codifed the same phrase as in the Genizah in his discussion of liturgy in his halachic compendium the Mishneh Torah.

Many Orthodox and Conservative Siddurs don’t contain this phrase, however, instead simply reading “the arrogant” (zedim), which is much more open to interpretation. It is easy to see why the references to wicked/arrogant governments were taken out by many Siddurs, since government and Church authorities might think we were talking about them (which in many case we were). It is interesting to note that the most recent Reform siddur, Mishkan Tefillah, reinstates the older version, referring to the “arrogant kingdom” (malchut zadon) and praying for it be broken (meshaber)- though in English they translate malchut zadon, perhaps somewhat evasively, as “realm of wickedness”.

Rabbi Jonathan Sacks points out that the Talmudic figure Rabban Gamliel asked Shmuel HaKatan to write this section of the Amidah, adding it to the then standard 18 sections. Shmuel HaKatan, the Talmud tells us elsewhere, always used to say, “Do not rejoice when your enemy falls.” The message is clear: this prayer is not motivated by personal animosity but rather the defense of the community and opposition to evil.

Some (probably few) might balk at thinking of the Trump administration as a “wicked” or “evil government.” What other words, though, can be found for an administration which wants to take away the protections of the law against their own mercenary predations, who threaten the future of all human beings and of the good earth itself through their rapacious disregard for the ecology, who are willing to make even one mother sit in limbo in an airport, her stomach sick, her eyes pricking with tears, not knowing if she will be reunited with her five year old son?

For wickedness let there be no hope, and may the erring return to you. May the arrogant kingdom be speedily broken. Blessed are You, who destroys the wickedness from the earth.

Are We Praying Against Trump?