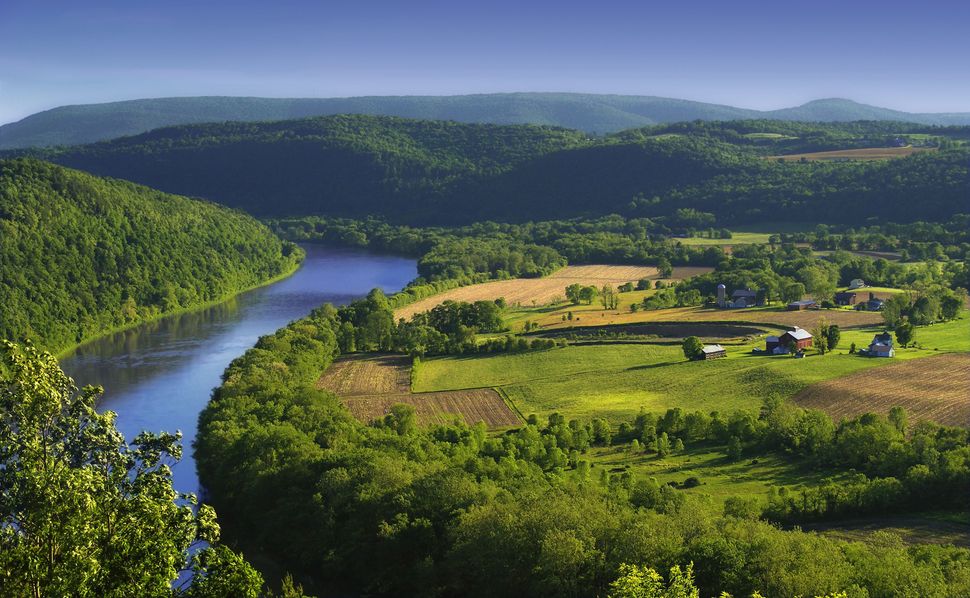 On November 9, we woke up in a Red State. Could it really be? Before school I broke the news to my 12-year-old daughter, who was completely distraught. “If anyone gives you a hard time,” I offered, “let your teachers know.”

“What if my teachers voted for Trump?” she asked, in tears as I ushered her out the door for her walk to the bus. Letting her go was among the most difficult moments I’ve experienced as a parent. The darkness outside – the dairy farms and rolling hills of central Pennsylvania’s Susquehanna River Valley – seemed menacing.

Her fears were prescient. At school she was taunted by the sons of Trump voters. Her homeroom teacher sent her crying to the counselor. The counselor assured her she had nothing to worry about, that Trump would make a very fine president.

It was a brutal week for our family, as it was for so much of the nation. We could not see a way through our grief.

That Saturday morning, four days after the election, we attended a bat mitzvah for the daughter of close friends. Temple Beth El in Sunbury is the only synagogue for 50 miles in most directions. Frontier Jews had once settled here, at the confluence of the East and West branches of the Susquehanna River, where they’d established dry goods and furniture stores in support of the coal industry. Beth El had been built in a former historic 1836 church. Today coal is gone, as is much of the region’s industry. In its place have sprouted Evangelical mega-churches. Few Jews remain in the valley, yet the legacy of Jews is enormous. Weis Markets, one of those original groceries, is today among the region’s largest employers. The names of Jewish philanthropists grace local performing arts centers, children’s hospitals, book prizes, and university student unions. Beth El itself, in gritty downtown Sunbury, was remodeled ten years ago. It occupies a stunningly airy modern space designed by world-renowned architects Venturi, Scott Brown and Associates.

On the morning of the bat mitzvah that space felt very much like a sanctuary. Watching the Torah carried by the beautiful young bat mitzvah girl around the congregation, hearing the emotional speeches of her parents, the heartfelt blessings of the Rabbi, we were transported to a place far removed from political turmoil. Love and tradition amplified the warmth of the sunlit room. In the call and response of the aliyah I could feel roots reaching back to those frontier Jews, back to my childhood in New Jersey, back to my grandparents in the Bronx, back somewhere older and more essential than this election.

Rabbi Nina Mandel seemed tenaciously focused on the service and prayers. “On that morning I was very aware of an enormous amount of pain in the community, in the congregation,” she told me, two months later. “I was very aware that there was this unspoken thing. So how do you address it? Say it’s here, but we still have a bat mitzvah to celebrate.”

“I think the most present fear that I look out for within the congregation is how this election is going to affect the tenor of anti-Semitism in our area,” Rabbi Mandel explained. Beth El congregation was vandalized in 2008, and again in 2012. “So, there’s always been anti-Semitism in our area. And now, it’s like people have permission. I feel that we now have a national leader who says, “I can say whatever I want, and still become president.”

Only this time, it wasn’t the scourge of anti-Semitism that roused Rabbi Mandel to action. In late December, a month after the election, white supremacist pamphlets desecrated the only mosque in the region, Congregation Beth El’s neighbor, the Sunbury Islamic Center.

Rabbi Mandel learned of it during a funeral service in the synagogue. “A police officer came to show me, and to see if we had found any signs ourselves. It all sort of bubbled up on that day. I reached out to Ann Keeler Evans, who’s the local Unitarian Minister, and to the people at the mosque, and we got ready to respond.” They planned a rally outside the mosque to “provide a loving, welcome, and safe passage for mosque members.” As she had explained to WNEP, the local ABC affiliate, “Look, we’re just going to get together on Friday, and we’re just going to stand there. Like we’re not going to do anything, but stand there.”

They’d cleared it with the Islamic Center. (“It would be creepy just to show up,” Rabbi Mandel laughed). On December 23, during the mosque’s Friday afternoon prayers, about 80 people turned out. It wasn’t the numbers but the makeup of the crowd that surprised and delighted Rabbi Mandel.

I admitted to the rabbi that since sending my daughter out the morning after the election I could view our region’s overwhelmingly conservative population only through a single (deplorable-tinted) lens.

But the makeup of the rally she’d organized challenged this overgeneralization. “These were the people who were saying, “In practice, this isn’t OK.” Like, you know, it’s one thing to hear the rhetoric, or for whatever reason they voted for Trump, whatever motivated them. But the idea that their neighbors – that their own town is going to be a place where their neighbors are attacked, that’s unacceptable.”

Were the members of the mosque thankful for the support?

“They were very thankful. I think there was sort of a combination of them being kind of embarrassed. The mosque keeps a very low profile, understandably. And this has been a relationship we’ve been working on. So they knew our faces. And then after the prayers they came out and they brought water bottles for everybody, and thanked everybody. It was very sweet. It was very moving. It was exactly, “This is what we want. We just want to show up. We’re just here.””

And she remembered that as people drove by the rally they were honking and waving from their cars and trucks in support.

“There was only one person who drove by and yelled out, “Don’t you have anything better to do!” And everybody in the crowd, as one, all shouted together: “No!”” 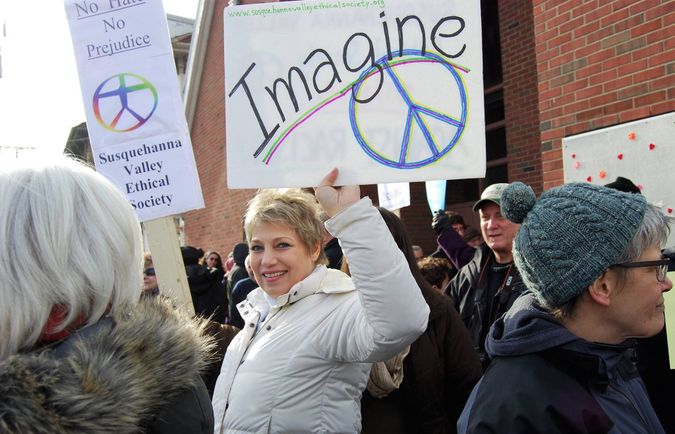 “The kind of person and rabbi I am, when I have a choice of the prayers to read, I read the ones that are about justice, and about trust and faith and hope. I am a social justice rabbi. And since the election every time I read one of these ‘prayer for our country,’ ‘prayer for our leaders’ – you know the things that we hope for – you know, even the ancient psalms, “Our enemies, our foes, shall be smitten!” – they have this whole other resonance now. They take on this whole new, unfortunate meaning.”

A month after the mosque rally Rabbi Mandel and her Unitarian friend couldn’t make it to the Women’s March in D.C. “It’s usually me and Ann Keeler Evans, sort of outlaw partners in these things. We were both like, “We should just do something here. We should just read the Constitution.”

They held the rally eight miles upriver, in Lewisburg’s Hufnagle Park, in a raised gazebo overlooking Bull Run Creek. Dozens of people showed up on that cloudy Saturday to read and to listen.

“That was extraordinary. All we did was, we reached out to some conservative voices and known conservatives in the area, who agreed, who were interested in coming. And we purposely said, “We’re just going to read the Constitution.” Everybody – we can all get behind the Constitution. Except the president,” she joked. “We can all get behind the Constitution. And people just lined up. We read it twice through, in its entirety. And I mean it was just – I was weeping through half of it, because it was just so amazing. You know, little kids, and high school kids, and older people. It was very very powerful.”

The idea struck me as subversively simple, like something we were all searching for, hidden in plain sight.

“It’s like, what are you going to do? It’s the Constitution! It’s a unifying thing,” Rabbi Mandel explained. “So there were a lot of different people. Conservatives, it seemed like a whole range of people. By the time we started getting into the Amendments, everybody was cheering for their favorite, and clapping, it was so beautiful. People were like, “19th Amendment – yeaahh! 14th Amendment – yeaahhh! This is my favorite one!” It was the right way to stand up and say, “This is how we’re going to mark this day.”

A bat mitzvah. Water bottles. Cheering an Amendment. Sometimes the most radical ways to resist are the most obvious: in tradition, in connection, in re-remembering who we are.