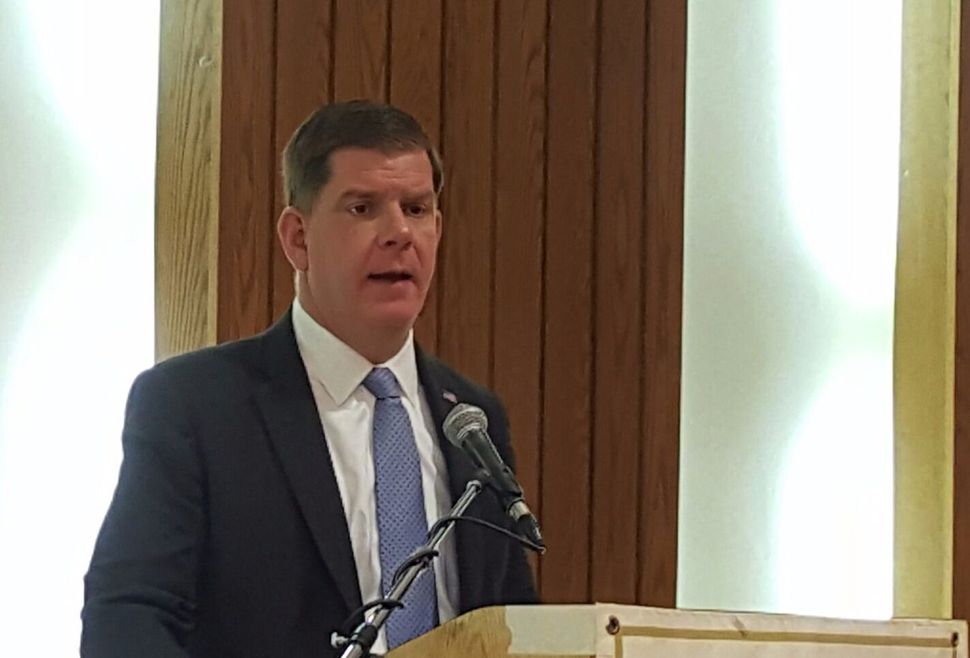 The Jewish Alliance for Law and Social Action (JALSA) held its annual meeting at Temple Israel in Boston on Sunday, January 29. Entitled “Joining Together for Social Justice,” the event, attended by several hundred friends, members and supporters, featured a keynote address by Boston Mayor Martin J. Walsh. Following the meeting, many attendees proceeded to Copley Square to join that day’s rally supporting immigrants and refugees.

The Too Klez For Comfort band entertained as people arrived, and a kosher brunch from Catering by Andrew was served.

JALSA honored its outgoing President, Mass. State Rep. Frank I. Smizik, and elected Lawrence Neil Bailis, who is an Associate Professor at the Heller School for Social Policy and Management at Brandeis University, as Board Chair and Incoming President.

Charles J. Ogletree, the Jesse Climenko Professor of Law and Director of the Charles Hamilton Houston Institute for Race and Justice at Harvard Law School, was presented with JALSA’s Lifetime Commitment to Justice and Equity Award.

“We will not stand idly by while our Muslim brothers and sisters are being detained and barred from entry to the U.S.,” said JALSA Executive Director Sheila Decter in her welcoming remarks. “But our democracy can deal with this. We have had many dark moments,” she added, recalling her own history of activism. “I remember Joseph McCarthy, the civil rights era, the turbulence of the 60s, and many other struggles,” she said. “We will get through it if we all do our jobs.”

Other recipients of this award were Joseph Kriesberg, President and CEO of the Mass. Association of Community Development Corporations; and Thadine Brown, Clerk of the Mass. Affordable Housing Alliance. Kriesberg and Brown are also co-Chairs of “Yes for a Better Boston,” which successfully campaigned for the passage of Question 5, the Community Preservation Act, on the November ballot in Boston. 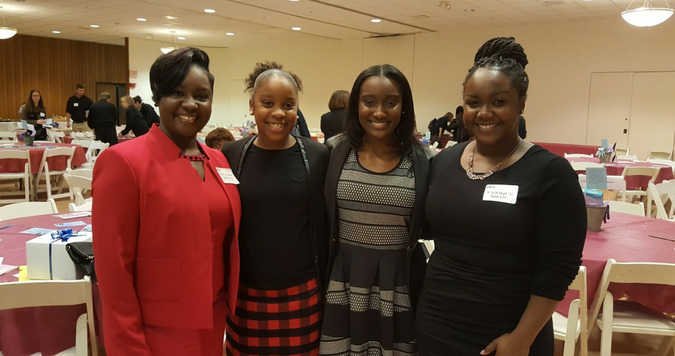 Speakers cited JALSA’S long history of action in accordance with Judaic biblical principles, and praised its successful campaigns for justice and equality. JALSA has advocated for workers, the LGBT community, the disabled, refugees, the disadvantaged and the oppressed, as well as for environmental protections and access to healthful foods. JALSA has also participated in the writing of amicus briefs used in court cases, and in successful recent efforts for the defeat of Question 2, which retained the cap on charter schools, and Question 5, which successfully enacted the Community Preservation Act (which will allocate proceeds from a 1 percent tax on upper income earners toward parks, roads, affordable housing and other community improvements).

Phillips recalled historic Black-Jewish alliances, and called JALSA “an organization whose mission mirrors my personal core values.” Turning to the subject of the day, Trump’s banning of immigrants and refugees from entering the U.S., she said, “The events of this last week remind me of the movie title, “Something Wicked This Way Comes.” She spared no words: “We are caught up in the paradigm of a madman, one whose name I refuse to utter.” His supporters, she said, have fallen in line and stepped into the morass. “It is unjust, inhumane, and frankly, un-American,” she said. “And marching and protesting aren’t enough. We aren’t one and done. We must stand up and take action.”

Phillips quoted Elie Wiesel: “We must take sides. Neutrality helps the oppressor, never the victim. Silence encourages the tormentor, never the tormented. Sometimes we must interfere. When human lives are endangered, when human dignity is in jeopardy, national borders and sensitivities become irrelevant. Wherever men and women are persecuted because of their race, religion, or political views, that place must – at that moment – become the center of the universe.”

Trump’s banning of refugees and immigrants on Holocaust Memorial Day, she said, was a grevious insult to the memory of the six million Jews who perished in the Holocaust.

Phillips called Ogletree a “friend, mentor, advisor and a national treasure in this country,” and turning to the mayor, who listened avidly to each speaker, she said that his recent responses counteracting the new immigration restrictions and detentions were “not political expediency, but following one’s moral compass,” adding, “And when you do that, you don’t have to ask if it is right.”

Referring to herself as an honorary Jewish girl, she said she was very farklempt to receive her award.

Mayor Walsh also dedicated much of his speech to Jewish topics, praised JALSA’S work, and promoted the Julian Edelman signed football on the podium as an incentive for attendees to support the organization.

He also lent words of praise to honoree Dillon. “When I got elected, I asked Sheila to stay,” he recalled. “I had no idea what her expertise would do for the new administration,” he continued, citing her successful efforts in housing veterans and helping to end homelessness in Boston.

“It was not courageous of me, or my staff,” he insisted, referring to his recent pledges to protect Boston’s immigrant population, and even to house them in his own office. “It wasn’t courageous — it was our job.”

At the Annual Meeting, JALSA announced its plan to continue fighting against Trump Administration attacks on its core mission — the pursuit of social, economic, and environmental justice, and the protection of civil and constitutional rights.

Decter cited JALSA’s Task Force on Economic Inequality, its Committee on Climate Change and the Environment, and its Commission on Law and Social Action as avenues by which, she said, “we can combat these executive orders and other policy initiatives that seek to undermine American democracy.” The organization is also actively increasing its fundraising to support this renewed and urgent effort.

JALSA, she said, is actively seeking more staff with communications, organizing, and legal expertise to organize volunteers in preserving our country’s democratic values.

“We are calling for attorneys, advocates, and passionate people who possess the knowledge and skills to help protect our Massachusetts residents and stand up to these policies,” said Decter.

Interested individuals and organizations can e-mail jalsaoffice@gmail.com or call 617-227-3000.