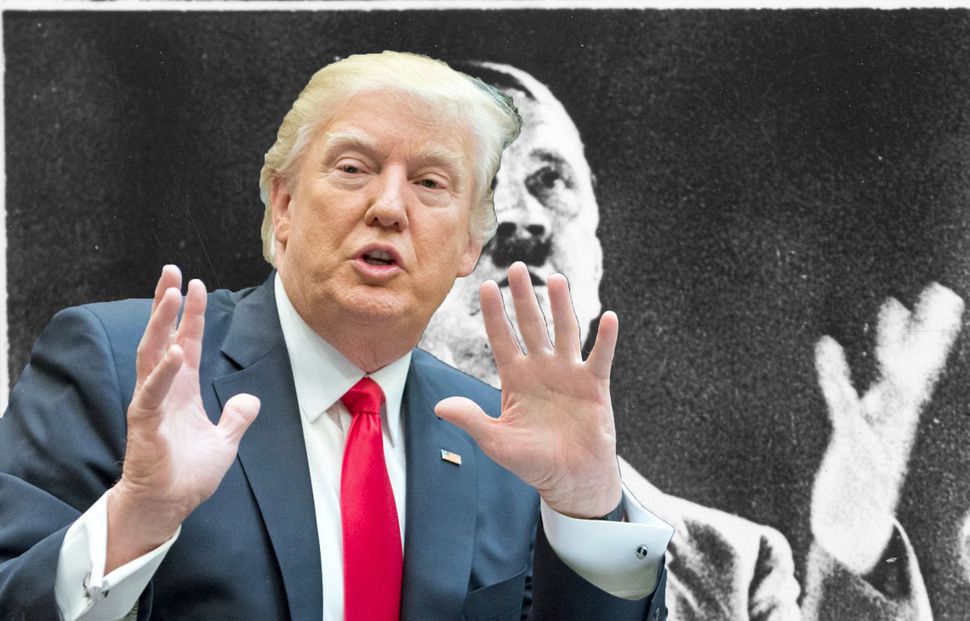 Trump is not Hitler.

Only Hitler was Hitler. There’s nothing worthwhile to be accomplished by introducing that comparison as a rhetorical tactic. As German historian Thomas Weber points out in his article on DW, comparing anyone to Hitler is a distraction and any argument that draws that parallel is destined to futility.

And yet this comparison abounds. Perhaps this is because Hitler is an easy landmark in the topography of bad guys. If modern history had poles, Hitler would be the universal marker of evil’s most extreme point.

Personally, I don’t like to use Hitler as a compass point, or the Holocaust as a logical tool. Neither of these are abstract concepts, able to be shaped and shifted to suit the rhetorical occasion. They were very tangible, very recent realities that hold a lot of meaning for myself, the granddaughter of three Holocaust survivors, the great-niece to countless victims of their baseless hatred and brutality.

I was shaped by the Holocaust. Beyond my family’s direct experiences, beyond the numbers inked into my grandfather’s arm, the family members I would never be able to meet, I found myself as a child drawn to Holocaust books— memoirs and historical fiction; stories written to make the lessons of the Holocaust available to those who could have use for its applications.

Trump is not Hitler. But I do find myself thinking back to the lessons those books taught me and, perhaps more importantly, the questions they raised. Questions that have followed me throughout the years, tugging at me every so often to remind me that they have yet to be answered. Questions that, today, I find myself viewing with new eyes.

I keep returning to one question in particular. Why, I often wondered, with all the policies being enacted over the years leading up to the implementation of the Final Solution, did more people not leave? Why did so many people, German Jews in particular, put up with so many laws curtailing their lives, demeaning their existences, until the day where it was that very existence that was demanded and summarily claimed?

But. Trump is a president whose controversial and unconstitutional actions have, in his first four weeks in office, created confusion, fear, and an unprecedented drop in job approval rating for a new president. By far, the most avid criticism comes from his immigration order, a proposed ban on immigrants from seven predominantly Muslim countries. With his apparent targeting of a minority religious group, Trump is making a pretty bold statement, and it’s a statement that should scare those of us with any minority status. For better or worse, I am finally able to answer the questions that needled me, the confusion that arose whenever I tried to understand all the minorities living in Europe and their seeming refusal to face facts. Finally, I understand the perspective that so many of these future victims must have had.

I imagine that minorities living under Nazi regime found solace in hope: Hope that Hitler would just go away; hope that other people, other nations would intervene; hope that the world would not allow a future as envisioned by Hitler and his party. I can imagine they put their stock in hope, rather than prepare for the worst, because now I understand the tantalizing oblivion of hope. Because I have found myself seeking ignorance and hope ever since it became clear that our country would be living with the reality of a Trump administration. Since the first day of Trump’s presidency, when my Facebook newsfeed changed from a virtual cocktail party to a running stream of political posts, I’ve avoided spending time on social media. When my friend or family member, enraged over the latest executive order, sends an article my way, I avoid the notification, hoping the news it contains will go away if I ignore it. The built-in checks and balances of our nation’s government will temper his extremist views, I’ve told myself. His rants and tweets do not reflect the way in which he will actually lead, I’ve hoped. And if none of that is true, I’ve thought, well then maybe he’ll just go away.

My head is fine down here in the sand, thanks. Don’t ruin my blissful ignorance with your fears and frustrations. Luckily, though, I cannot maintain these illusions of tranquility. Luckily, the people I know are not taking this administration’s actions lying down. My friends are attending rallies, calling their senators, sending donations to important causes. My friends are talking to me, insisting on sending me these articles, posing important questions. As much as the sand beckons, I’m having a hard time spending all my time down there.

It is this activism that offers me comfort when I come up to face reality. If we, as Jews and as Americans, refuse to stand idly by while our president signs order after terrifying order, can maintain this opposition, then we are not choosing the path of ignorance. Trump is not Hitler, but more importantly, America is not 1930s Germany.

A friend of mine attended an airport demonstration after Trump’s immigration executive order. He posted on Facebook his favorite sign from that night: ‘First they came for the Muslims. And we said, “Not this time, motherf*cker.”’ As HIAS, a Jewish American refugee organization, said in one of their recent emails, “We help refugees not because they are Jewish, but because we are.” If Trump is not Hitler it is because, in part, we remember, and we will not let him be.

As much as reality hurts, or terrifies, the only way to ensure that our democratic country remains just that is to pull our heads from the sand, turn our faces to the harsh winds blowing from the White House, and raise our voices to stand up for the freedom in which we believe.